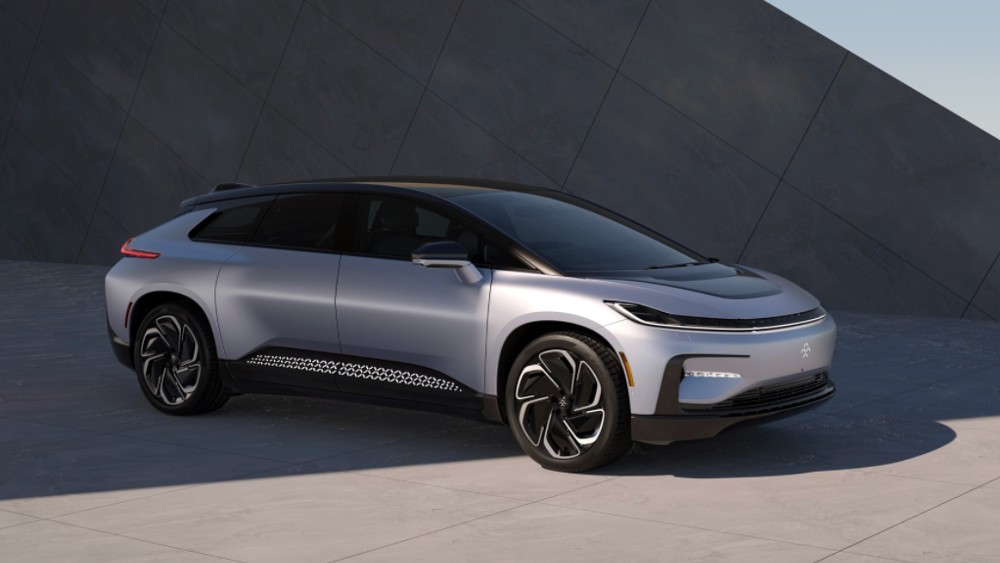 Faraday Future may finally have, well, a future.

After years of financial and organizational turmoil, the Southern California EV start-up has unveiled the first production-intent version of its long-fabled FF 91, an all-electric “ultra-luxury” crossover. The company announced that the start of production for the EV, which will be built at its factory in Hanford, California, remains on schedule for the third quarter of this year.

Although the FF 91 was teased way back in 2017, the road to pre-production hasn’t exactly been smooth. But reaching this stage now marks the fourth of seven milestones that Faraday laid out last October, a promising sign of progress.

Though the FF 91’s original design debuted nearly a half-decade ago, the production-intent model doesn’t stray too far from that concept. The four-door crossover appears to straddle the line between SUV and luxury saloon. It measures 207 inches from tip to tail, which gives the car a considerable 126-inch wheelbase. That should help deliver a smoother ride, if not a more agile one.

The exterior, meanwhile, shares a lot of the overarching design language with other EVs on the market—mildly futuristic (an LED light strip replaces standard headlights) and heavy on soft, curvy lines. It’s decidedly attractive, if not all that original. The suicide doors, however, are a welcome touch.

Inside, the FF91 leans heavily into passenger entertainment and comfort. The car will offer 100 inches of high-resolution viewing areas across 11 displays, including a large backseat screen for watching movies on those weekend road trips. The company also promises the SUV will have a “lightspeed” internet connection, so anyone not driving can get some work done, if needed. The SUV’s pièce de résistance, however, is the NASA-inspired Zero Gravity seats. Naturally, all are covered in plush leather, but more impressively, each seat fully reclines—including the back seats—and comes with it own built-in heating.

Under the hood, the FF 91 is no less ambitious. The SUV will have a 130 kWh battery pack that, according to the brand, will deliver a more than respectable 378 miles of range. A three-motor setup, meanwhile, will combine to deliver a whopping 1,050 horses. That mill will rocket the car from zero to 60 mph in a blistering 2.40 seconds. If accurate, those figures alone would instantly make the FF 91 the most powerful SUV on the market, shattering the specs for Aston Martin’s new 697 hp DBX707. And despite its size, the SUV’s speed might even be enough to give the lightning-fast Bentley Bentayga a run for its money.

The FF 91 has fully reclining back seats.  Faraday Future

Faraday Future believes the FF 91’s combination of power and state-of-the-art tech will make it a unique addition to the electric SUV class. Matt Tall, Faraday’s vice president of manufacturing, said in a statement that the FF 91 is “expected to be the first ultra-luxury EV to reach the market.” Speaking to Robb Report last summer, CEO Carsten Breitfeld echoed that sentiment, saying he wanted to “redefine the top luxury segment of automotive, above Bentley, Rolls-Royce and all others.”

Whether Faraday Future can achieve those lofty goals remains to be seen. The start-up said it will build more production-intent vehicles over the coming months for vehicle testing and validation, in addition to final certification. If all goes according to plan, we should have an answer before too long.

Check out more photos of the FF 91 below: