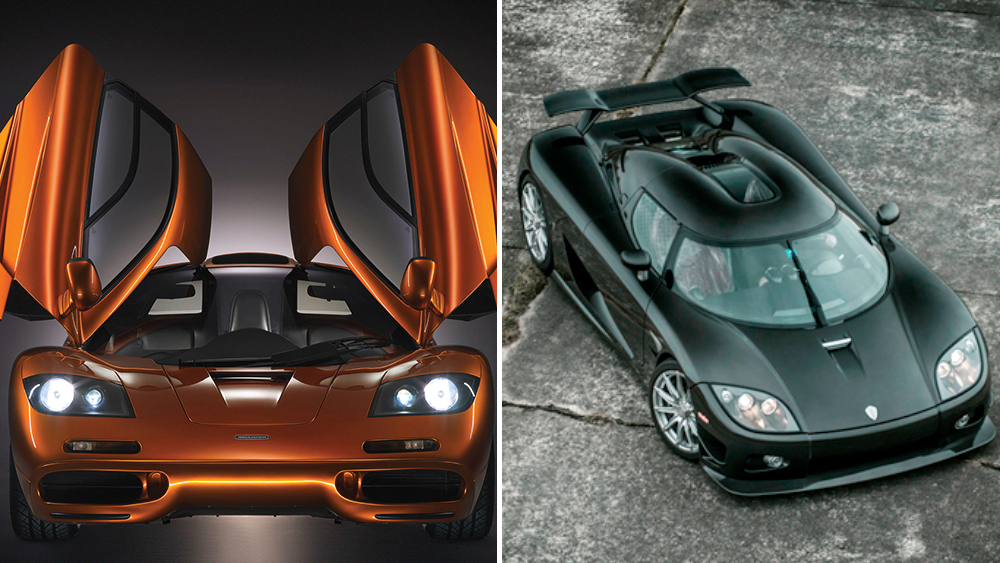 The first production vehicle to crack 200 mph was the Ferrari F40. The year was 1987; immediately after that Italian stallion’s speedometer registered 201, the race to enter the 300 mph club began. In 2019, amid fervent competition between Koenigsegg, Hennessey and Bugatti, the Chiron Super Sport bested the others by a horseshoed nose, achieving a staggering 304.7 mph. In early 2020, a bevy of new hypercars was announced—several promising at least 300 mph. Then, this year, SSC North America turned a claim into reality, cementing the SSC Tuatara’s spot at number two—at least for now. So, we’re updating our list of the fastest cars in the world and expanding it to show more wheeled lightning. (Three quick editor’s notes: our sole criterion is top speed, our floor for consideration is at least 218 mph and unproven manufacturer claims are denoted.)

Porsche did some light sandbagging when it claimed the top speed on its 918 model was 214 mph. In 2018, one 918 Spyder was recorded clocking 218.4 mph. Still the fastest production car the Stuttgart marque has produced, the hybrid power train features a naturally aspirated 4.6-liter V-8, good for 599 hp, and twin electric motors that contribute another 282 hp, bringing the sum to 875 hp and a stupendous 944 ft lbs of torque.

Only 400 of these carbon-fiber beauts emerged from Maranello, all singing the glorious, throaty song of a naturally aspirated 6.0-liter V-12. With 651 horses lurking in that mill, and a lithe-for-the-time curb weight of 3,000 pounds, the Enzo shredded the quarter-mile in 11 seconds flat, with the ability to continue on to 218 mph, given enough asphalt.

This limited-edition coupe from Aston Martin was capped at 77 units, though after an accident in Asia, only 76 examples remain. Beneath the long hood lies a 7.3-liter V-12 from Cosworth, good for 750 hp and 553 ft lbs of twist. That propels the aluminum-and-carbon-fiber chassis from a dead stop to 60 mph in 3.5 seconds. A series of tests by Aston showed that its steed was capable of 220 mph back in 2009.

This gorgeous stunner hails from Croatia, the first road-legal production vehicle to emerge from the brain of Mate Rimac. The fully electric hypercar employs four motors that, in concert, make 1,224 hp and 1,180 ft lbs of torque. Less than 10 examples were produced, including the one that Richard Hammond famously crashed on camera, so when one came up for sale in New York City in September of 2020 for $1.6 million, it was a big deal.

The successor to the game-changing Zonda, the Huayra comes from Italian speed master Horacio Pagani and is named after Huayra-tata, a Quechua wind god. Fitting, considering the 720 hp coming from a twin-turbocharged Mercedes-AMG V-12. A seven-speed single-clutch gearbox puts down the power while delivering chunky, whiplash-inducing shifts, allowing you to scream from zero to 60 mph in a mere 2.8 seconds.

The Pagani Huayra BC Roadster.  Courtesy of Pagani Automobili S.p.A.

The “BC” in the moniker of this entry is an homage to Benny Caiola, an Italian-born businessman who became a New York real estate titan. Caiola bought the first Zonda off Horatio Pagani himself, subsequently becoming a dear friend. This iteration of the open-top Huayra launched in 2019, after Pagani left the Geneva International Motor Show with five unsolicited deposits for a more aggressive version of the Huayra Roadster. The resulting machine features a new Mercedes-AMG twin-turbo V-12, tweaked to be about seven percent more powerful than the coupe version of the BC. The 791 hp output should be more than ample to rocket the $3.5 million open-top hypercar to 240 mph.

The iconic three-seater from McLaren was a revolutionary model from the brilliant mind of designer Gordon Murray. Built in 1993, it was the first carbon-fiber-bodied production car ever built, and featured a 6.1-liter V-12 from BMW that was good for 618 hp and 479 ft lbs of torque. For the then-expensive, now-bargain price of £500,000, you were rewarded with blistering speed: zero to 60 mph in 3.2 seconds and zero to 100 mph required just 6.3 seconds. Simply mental performance figures, especially when you factor in that the engine is naturally aspirated. When it officially set the world speed record back in 1998, the 240.1 mph run remained top dog until 2005, when the Koenigsegg CCR bested it by all of 1 mph.

Steve Saleen set out to build a Bugatti Veyron challenger, and this street-legal race car was the result. One of the first American mid-engined performance machines ever crafted, the Saleen S7 was 100 percent hand-built. A heavily-tweaked 7.0-liter twin-turbo Ford 351 Windsor Small Block gets bored and stroked, bestowing the handsome coupe with 750 hp.

The CCXR uses the same 4.7-liter twin-turbo V-8 mill as the CCX, but the Swedish company modded the power plant to run on E85 race gas, which shot the power from 795 hp up into the four-figure range—1,004 hp to be exact. Given the CCXR’s upgraded aerodynamics package and engine, it would be interesting to see how it performs in a proper top-speed run that’s in a straight line and not on a circular track (which is how the aforementioned CCR ran).

The second hypercar from the Swedish automotive wizards to grace our list is referred to as a “mega GT” by founder Christian von Koenigsegg. That’s because it’s packing 1,700 hp, 2,581 ft lbs of torque and has four seats, each of which was designed to hold an actual human. (Thoughtfully, there’s room for the storage of one carry-on suitcase per passenger.) The sprint to 60 mph is over in 1.9 seconds—faster than you can read this sentence.

Elon Musk launched Tesla with a coupe, so this electric Roadster is a fitting return to his roots. Only he’s turned everything up to 11. Tesla claims its 200 kWh battery pack will provide up to 620 miles of range, while a trio of motors will propel the $200,000-plus four-seat supercar to 60 mph in 1.9 seconds. With that quickness, the quarter-mile is in your rearview in just 8.8 seconds.

When engineers from Aston Martin and Red Bull Racing put their heads together, the world benefits. The Valkyrie, or AM-RB 001 as it was known in development, is a fantastically wild-looking hypercar. Behind your seat, a 6.5-liter Cosworth V-12 churns out 1,160 hp, more than enough to compress your innards during the 2.3 seconds it takes to hammer to 60 mph. And it has recently been spotted road-testing.

The rear-wheel drive Speedtail employs a hybrid system good for 1,035 hp, and its sleek shape and lightweight carbon-fiber construction is tailor-made for its top speed of 250 mph. McLaren claims it’ll take only 12.8 seconds to go from a dead stop to 186 mph, which is an eye-watering stat.

SSC North America’s 2007 Ultimate Aero TT has a Guinness Book of Records–verified top speed of 256.18 mph. That record has since been broken by others, and now belongs to its successor, the SSC Tuatara. But that doesn’t take anything away from this fully carbon-fiber behemoth. Power comes from a twin-turbocharged Corvette C5R V-8 that’s tuned to produce more than 1,100 hp and 1,094 ft lbs of torque. The rip to 60 mph is 2.7 seconds, and the task of stopping the land missile is aided by twin air brakes that pop up from the rear wings.

The second model from the Croatian electric hypercar manufacturer is aptly named Concept Two (also known as C_Two) and comes with a lot of boastful claims. The 1,888 hp coupe purportedly hits 60 mph from a standstill in 1.85 seconds, has a maximum range of 402 miles and hustled around the Nürburgring twice without a dip in performance.

While Bugatti bosses said they wouldn’t do a top-speed run (and instead just did a zero-to-250 mph-to-zero sprint), one owner hit up Johnny Bohmer Proving Grounds to see the 1,500 hp Chiron realize its limited top speed of 261 mph. The speedometer goes up to 310 mph, though, so undoubtedly the 2018 Chiron can go much faster, but the folks at Bugatti cite tire limitations as the reason for the factory-installed governor.

Here’s yet another Bugatti, this one built back in 2010 for the sole purpose of securing the accolade of fastest production car ever built. And the Veyron Super Sport achieved it, per Guinness. From the same W-12 power plant, engineers managed to eke out an additional 180 hp, bringing the grand total to 1,184 hp. To unlock the potential for max speed, you’ll need a second key that’ll give unfettered access to the engine.

John Hennessey’s eponymously-named performance group is obsessed with power and speed, evidenced by shoehorning as much oomph as it can into production cars from other manufacturers. Then Hennessey built his own supercar in 2014, powered by a 7.0-liter twin-turbo GM V-8 packing 1,244 hp and 1,287 ft lbs of torque. The Venom reached 270.4 mph at the Kennedy Space Center’s 3.2-mile landing strip, but only in one direction. Since both directions are required for a record-holding run, in addition to a production volume of 30 or more cars (only 13 Venoms have been sold), the Hennessey doesn’t qualify for official record books. But still, the beast has surpassed 270 mph, and that’s impressive as hell.

In November of 2017, a Koenigsegg Agera RS, running E85 fuel (meaning it was getting 1,360 hp), was driven by a factory driver to a two-way average speed of 277.8 mph on an 11-mile strip of closed road in Nevada. The car, owned by a customer who suggested the feat, actually hit 284.5 mph during the record attempt, which is staggering. At the time, it also nabbed the fastest zero-to-250 mph-to-zero metric (33.2 seconds), the highest average speed during the flying kilometer (268 mph) and for the flying mile on a public road (276.3 mph).

Hennessey Performance Engineering’s Venom F5 picks up the baton from its older sibling and rockets away. A 6.6-liter twin-turbo V-8 pumps out 1,817 hp and 1,193 ft lbs of twist, which propels the 2,950-pound coupe to 60 mph in under two seconds. And in case you were wondering, its name is an homage to the F5 category of tornados, the most intense level possible on the Fujita scale.

The fourth and final Koenigsegg to make the list is named after the founder’s father. While the Swedes have yet to officially cite a top speed for the 1,600 hp asphalt assaulter, in theory, the 5.0-liter twin-turbo V-8 can reach 330 mph. To achieve this kind of speed, the only expanse of tarmac long enough would be the 5.4-mile straight at Ehra-Lessien in Germany, but that’s a Volkswagen facility and it’s unlikely VW would welcome a hopeful contender to bust its Chiron’s record.

A V-16 with 3,000 hp? Sounds like a dream, which may explain why it’s been in development for more than a decade in Dubai. That mill is made by slapping two LS V-8s together, and if that’s not enough oomph, you can opt for a truly bonkers 5,007 hp iteration of the Devel Sixteen for more than $2 million. That’ll just be for drag-strip dominance, as that version won’t be legal on the road.

In October of 2020, SSC North America’s founder Jerod Shelby took his latest hypercar to a Nevada desert and hammered out a run that was touted to have averaged 316.11 mph. The internet, however, was skeptical, and shredded that session’s data in short order, negating it. In January of 2021, Shelby decamped to proving grounds at Kennedy Space Center for a redux, bringing ample recording devices and external groups to monitor. That trial resulted in a 279.2 mph speed on a northbound run, followed by the car reaching 286.1 mph on a southbound pass. Those (certified) results average to 282.9 mph, which is more than enough to notch the SSC Tuatara above the Koenigsegg Agera RS on this list.

The top spot for the world’s fastest supercar goes to Bugatti. In 2019, pilot Andy Wallace railed a tweaked-version of the 1,600 hp, 8.0-liter quad-turbocharged Chiron Super Sport around the Ehra-Lessien track. The modifications included lengthening the body by 10 inches, lowering it and giving it a new rear aero kit, as well as a new exhaust setup. The real heroes, however, were the Michelin Pilot Sport Cup 2 tires that were x-rayed before fitment to ensure perfect structural integrity. Watch the Chiron hit 304 mph below: