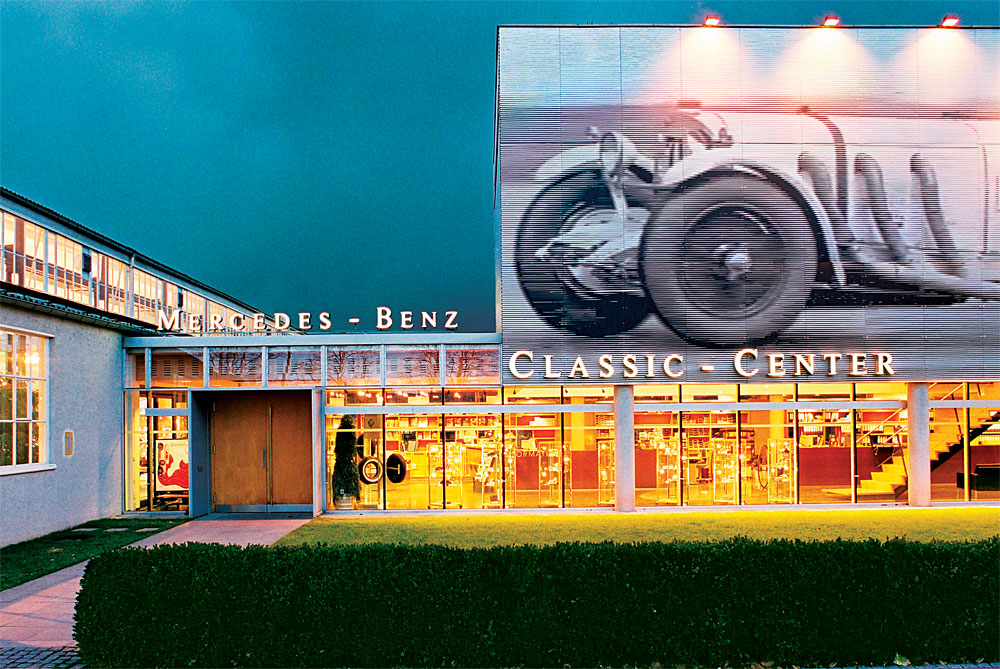 It hovered above two tiny pedestals and looked like the fossilized remains of some huge flying reptile, a tangle of thin tubes describing the skeleton of the 300SL Rennsportwagen. An identical frame hung on the workshop wall like so much modern sculpture; except this, the original, was burned beyond repair. The priceless prototype—the first 300SL made—had gone up in flames, its magnesium/aluminum body completely incinerated. Its chassis, although intact, had been sufficiently weakened by heat as to become structurally unsound, so master fabricators meticulously re-created the elaborate frame geometry and complicated castings of the genuine racecar. A similar body has been measured at fixed points using laser technology to cut hundreds of profile sections that are sandwiched to create a buck from which a new aluminum body will be formed. The engine block and cylinder head have been reproduced, and the gearbox and rear axles restored using salvaged components. It will be painted DB180, better known as Warm Silver, traditional racing livery for cars wearing the three-pointed star. Thus begins a two-year restoration of consummate difficulty, but the result will be perfect: It is being undertaken by Mercedes-Benz.

Projects like this are carried out at the Classic Center in Fellbach, a large modern facility set apart from Mercedes-Benz’s sprawling factory plants outside Stuttgart. The building’s imposing facade greets visitors, who enter an impressive showroom filled with an ever-changing stock of meticulously prepared Mercedes-Benz automobiles, including prewar, supercharged, and 300SL models. Among them is an SSK, a 540K Cabriolet and Coupe, a brace of Gullwings, and a dozen other gems, all of them for sale.

Adjacent is an elegant space more akin to the modern lobby of a Four Seasons than a parts and accessories counter. Here, collectors and casual visitors can obtain literature (including exact reprints of rare manuals, sales brochures and posters), choose from a selection of wristwatches, or order a part indistinguishable from the original, reproduced by Mercedes from that rarest of materials, unobtanium. The Classic Center’s raison d’être is to support the brand and its owners by supplying technical information, service, restoration, and by remanufacturing long-unavailable parts for classic Mercedes-Benz automobiles, that is, cars that have been out of production for over 20 years.

Upstairs, administrative and executive offices reflect the high order intrinsic to all serious German enterprises. It is here that I was introduced to Herr Stefan Röhrig, senior manager of the Classic Center, who assumed his role when the facility was opened in 1993. A confirmed “gear nut” who quietly confesses an interest in Italian motorcycles, Röhrig outlined the objectives of his organization as we toured the largest and most fascinating part of the complex: the workshops.

Entering one vast room, I found myself face-to-face with Number 722, the 300SLR driven by Stirling Moss in the 1955 Mille Miglia at an average speed of 157.65 km/hr—a record unsurpassed even today. Acknowledging the significance of this particular racer, Röhrig remarked that an interested party recently offered well in excess of $20 million for the privilege of ownership, an offer Mercedes declined as surely as a government refusing to sell one of its national treasures. This and a dozen other competition cars, from an early SSK to a recent Group C racer, were being ministered to by specially trained technicians. Asked whether any old, original workers were on the Classic Center team, I was informed that those gentlemen had long since retired, but that the current mechanics were every bit up to the task.

Apart from offering cars for sale and working on customer cars, the Classic Center is responsible for maintaining the ones owned by the factory museum in Stuttgart, where about 75 cars can be seen at any given time. (More than 400 other significant examples are secreted in five local, unmarked and utterly anonymous warehouses near the Classic Center. Later in the day I was taken to three of these, where row upon orderly row of automobiles spanning more than a century, some covered and others not, await the opportunity to emerge from their dark repose.)

Leaving the motorsport workshop, we toured the areas where customer cars in varying degrees of repair or restoration are assiduously attended. Cars from all over the world—most of them from Europe and America—have made the pilgrimage to their birthplace, and will leave these facilities with a new lease on life, their orotund exhaust notes a testament to Mercedes-Benz’s past achievements.

From the beginning, Benz and Daimler grasped the significance of their roles in making automotive history, and scrupulously documented both companies’ activities. Starting with the first automobiles in the 1880s, and especially after the merger of Daimler and Benz in 1926, the factory has maintained an ever-expanding archive recording the development and production of all their cars and other vehicles. Ninety-five percent of prewar and postwar technical drawings, research and test data have thus far been committed to digital storage media for future reference. Photographic records abound. There is some form of production data for each individual vehicle produced since 1886 (except prewar cars built in Mannheim and Berlin), going back to the old commission books for the earliest cars. If, for example, a customer needs to know the color and pattern of the upholstery in his 300SL when it left the factory, the specification is readily available. A sample of every difficult-to-reproduce part serves as a blueprint for future remanufacture, a practice begun six years ago to ensure the longevity of future classics. No other carmaker has so diligently preserved a record of its products and methods as Mercedes-Benz.

The warehouse, adjacent to the workshops, recalls Tut’s tomb, where one encounters “wonderful things” at every turn. My host and I clambered up a ladder to a catwalk, on either side of which lay bare metal nose sections, called front clips, for the 300SL roadster. An asymmetrical original with rough edges sat next to a stack of perfectly formed and finished modern pieces, a testament to improved production methods in the intervening 45 years.

Thirty-five thousand parts for classic Mercedes are inventoried at the central warehouse in Germersheim, with 4,500 on hand at the Classic Center. An additional 12,600 are available with a three- to four-month lead time, sourced from specialized vendors. These parts must pass every test to which in-house parts are subjected by the manufacturer’s testing laboratories, and are sold with a 24-month warranty.

The costliest part yet reproduced is a head assembly for a 1920s-era SSK, a bargain at $35,000 (complete engines are considerably more) and produced by the Classic Center to rescue a restoration project being undertaken for the factory museum. Such rare items are made in small batches, as opposed to one-off, in an effort to amortize the cost of setup and help keep other old-timers on the road.

Keeping the cars alive is Röhrig’s mission, as we learned as he explained the concept of Fahrzeuge (driving vehicle). These cars are “built to drive, not to park,” he said, going on to observe the difference between Americans and their Continental counterparts. “Europeans drive, Americans collect,” he added, referring to the American predilection for over-the-top restorations and an obsession with better-than-original standards of perfection.

True to form, the stoic Swabians at Mercedes-Benz espouse a philosophy guiding the restoration of classic cars that relies on simple logic: A car is original only once. Their emphasis is on preservation, to the extent that it is possible. Which is why in Germany, a good unrestored car can fetch as much as a perfectly restored example. Overrestoration is not a policy.

According to Röhrig, the average cost of a complete restoration on a 300SL Roadster or Gullwing, for instance, is about $250,000 and $265,000 respectively, and requires approximately one and a half years. Thorough written and photo documentation records the progress of the project, which is posted regularly for customers on a password-secured web site. About 10 complete restorations are completed every year, while about 800 less comprehensive projects are performed on other cars. The Classic Center provides a fixed price quote, but lists materials and labor separately to make the project cost transparent to the client. This professional approach takes the guesswork out of the equation for customers who might otherwise be looking down the throat of an automotive money funnel. And unlike most restoration firms, the Classic Center guarantees its work for one year.

For Röhrig, the most challenging but satisfying projects are cars of great historical interest, like Le Mans racers. While most of these are at present in the possession of the factory, some remain in private hands. When asked about the most difficult customer job undertaken thus far, Röhrig enumerated details of the restoration of an important 1922 Targa Florio racecar. Only four were manufactured and Mercedes-Benz didn’t own any, making the duplication of missing parts difficult. It was fitted with the first supercharged engine ever produced by Daimler, an unusual 1.5-liter unit whose engine housing was half aluminum, half iron. Early versions of this engine failed, and the only drawings extant did not reflect subsequent production changes that made the car’s engine reliable. With records that were only 85 percent complete, engineers at Mercedes actually had to reenact the final stages of testing and development as if the car were being designed anew. Roehrig acknowledged that the project was as rewarding as it was unprofitable, but in the end, another significant piece of automotive history was preserved.

Asked if there is a prototypical Mercedes-Benz collector, Röhrig offered some thoughts. According to his experience, most collectors tend to begin with the car that fired youthful passions, and then move backward in time as resources and appreciation grow. Most of them drive their cars, many competing in races and endurance events. Some prefer the patina of age and rally dust to fresh paint and concours trophies, but all are united in a love for the marque. And according to Röhrig, 71 percent of Classic Center clients drive a new Mercedes-Benz.

Understanding that American collectors constitute a large body of the classic Mercedes fraternity and a potentially substantial client base, the company has set up a Classic Center in Montvale, N.J.—the first to be created in the United States by an automotive manufacturer. According to Dr. Josef Ernst, manager of Classic Center public relations in Stuttgart, plans are under way to open an expanded Classic Center in the United States. The most likely location is in Southern California, where appropriate building sites are being evaluated. Technicians for the American center will be trained in Germany and the operation will have complete access to archival resources. It’s all a part of Röhrig’s preservation plan, where “Mercedes-Benz automobiles prove themselves as classics by continuing to perform.”