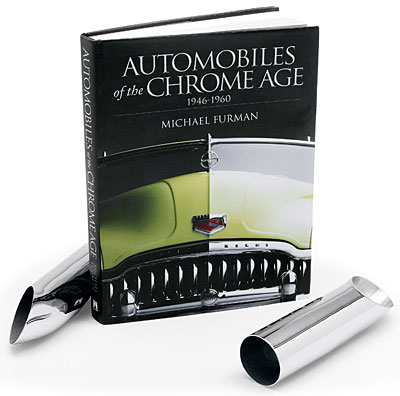 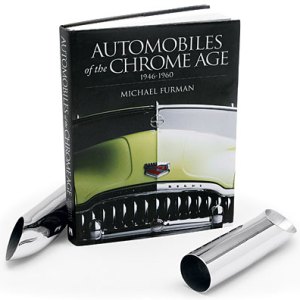 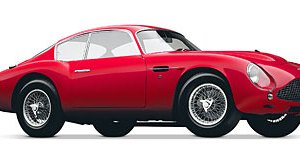 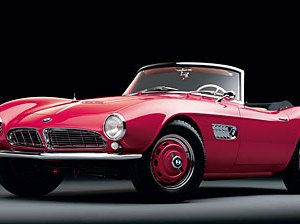 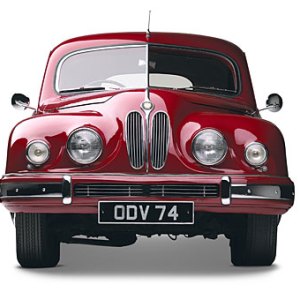 When he was 12 years old, Michael Furman snapped what he thought was his first automotive photograph. However, when he viewed the developed film, rather than the image of the bright orange 1963 Corvette that had sped through his Philadelphia neighborhood, he saw only the empty street; the shutter speed on his camera was too slow to capture the car in motion. (Furman eventually did get his photo, one day when he found the car parked on a nearby street.)

Thirty years later, Furman is still photographing cars, but now his subjects stop for him, in his Philadelphia studio. There, Furman collected the images for Automobiles of the Chrome Age: 1946–1960 (Harry N. Abrams, 2004), his new book that depicts more than 100 of that era’s iconic vehicles. Furman photographed them with a Sinar, a Swiss digital camera, and to prevent the studio lighting from distorting any of the cars’ colors, he took shots of each vehicle from a number of slightly different angles. Thus the photos that appear in Furman’s book and on these pages are actually composites of multiple images that digital artist Dave Phillips, Furman’s colleague, stitched together.

Furman, who previously published Motorcars of the Classic Era (Harry N. Abrams, 2003), which features 80 vehicles built from 1925 to 1948, selected for his latest book cars that best reflect the postwar zeitgeist. The United States, Furman explains, basking in victory and enjoying a flush economy, built automobiles consistent with the mood of the country. With an emphasis on girth and on chrome and other ornamentation, machines such as the Chrysler 300 and the Buick Skylark stood as symbols of pride and prosperity. In contrast, Europe, its industries in shambles and its resources depleted by the war, produced models such as the 1953 Bristol 401 and 1958 BMW 507, leaner designs that placed more emphasis on streamlined shapes than surface treatments. “Cars strongly reflect the era in which they were made,” Furman says. “They really are a bellwether and an indicator of society at the time.”

Following is a selection of the autos and photos featured in Michael Furman’s Automobiles of the Chrome Age, accompanied by comments on each from the photographer.

Aston Martin CEO Ulrich Bez calls the DB4GT—the first collaboration between the British carmaker and the Italian coachbuilder—one of the most beautiful cars the company has ever created. The car, which developed more than 300 hp, could reach speeds greater than 150 mph. Aston built only 19 examples, which is one reason why today a DB4GT Zagato can command more than $2 million.

“The Zagato is stunning and elegant. Elegant means simple and beautiful. That sounds ho-hum, but trying to make something elegant is the most difficult thing.”

During the limited production run of the 507, BMW built only 253 of the V-8-powered roadsters. The German manufacturer paid homage to the aluminum-bodied vehicle, one of BMW’s most famous designs, by referencing its lines and curves in the low-volume Z8 roadster introduced in 1999.

“You can picture Grace Kelly, Kim Novak, Catherine Deneuve, wearing dark glasses and a scarf, driving this car down the road and looking beautiful and capable at the same time.”

Bristol, a British company that built airplanes and aircraft engines, naturally designed its 401 with the aerodynamically optimal teardrop shape. The car’s thin aluminum body panels cover a small-tube steel frame, but a more readily apparent and recognizable feature is its kidney-shaped grille, a design element that has since been made famous by BMW.

“As part of war reparations, Bristol got hold of prewar BMW designs, which included the kidney-shaped grilles. During the war and prior to the war, Bristol was involved with aircraft design, and the car has an aircraft feel to it. After World War II, there was a much greater sense of aerodynamics, and Bristol was transferring what it knew about aerodynamics more directly to its cars.”

While the recently released Chrysler 300C’s signature characteristic is its battering-ram grille, the sedan’s ancestral namesake was best known for the adornments at the other end of the vehicle. Chrysler’s chief designer, Virgil Exner, endowed the 300C with tail fins that were even more audacious than those on its predecessors.

“The 300C is one of the great American designs. It’s not just a car with strange fins on the back. It’s one of the few finned cars that took the design aesthetic and tried to make it work as an overall statement.”

To commemorate Buick’s 50th anniversary in 1953, General Motors introduced the Skylark, a luxury vehicle intended to compete with Europe’s finest sports cars for drivers’ affections. The convertible was an immediate hit, and GM, which planned to issue the car for only that one year, chose instead to release the 1954 version. The designers shortened the Skylark’s wheelbase, reduced its price, and, most notably, added eye-catching chrome fins above the taillight housings. Surprisingly, however, the car did not sell well and was discontinued the following year. GM revived the Skylark in 1962, but that year’s model and those that followed in the ensuing years resembled the original in name only.

“When they changed the Skylark in 1954, GM made it into a different car. The chrome-capped fins on the back were a wonderful treatment. They were the neatest things in the world.”

Following World War II, the Austin-Healey grew as popular in the United States as it was in its native England, as former American servicemen who had driven the cars while overseas became customers for the British imports. The American demand for the Austin-Healey was so great that it helped to revitalize the British economy.

“This car looks like it wants to leap at you. It’s as if you are looking at a sprinter; there’s a real sense of power down low. With the sweeping line and the big hips, there’s the sense that it’s ready to spring forward.”

With a price tag of $18,000 in 1953, the R-Type Continental was the most expensive four-passenger production vehicle of its day. And with a top speed that approached 120 mph, it was also the fastest among its peers. Rolls-Royce’s stylist John Blatchley designed the vehicle’s signature fastback body after conducting aerodynamic studies in Rolls’ wind tunnel.

“Every design element on this car is there for a purpose and supports every element adjacent to it. The proportions of the car are perfect. You cannot find a bad angle on it. I look at this car and say, ‘God, that’s perfect,’ every time.”