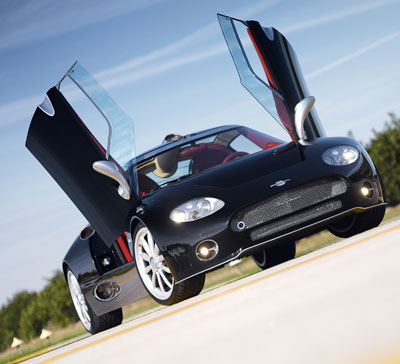 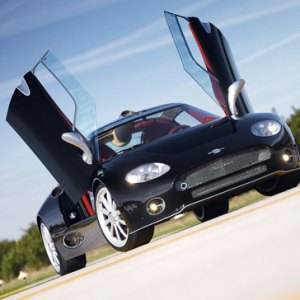 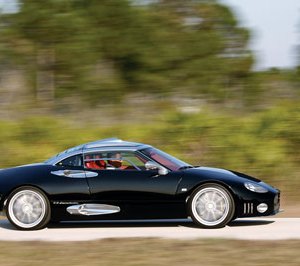 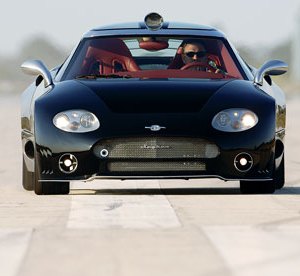 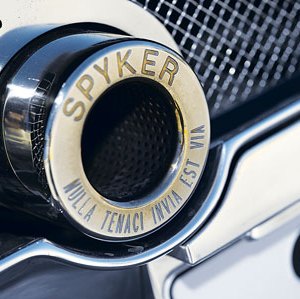 The Spyker C8 Laviolette is not a car for those who prefer to maintain a low profile: It leaves you no choice but to make a grand entrance, regardless of whether you are arriving at or departing from your destination. Squeeze gently on the car’s key fob button, and the forward-hinged driver-side door will scissor skyward. Press a second button, and both doors will open simultaneously in this fashion. The display may not rank with the raising of London’s Tower Bridge or the lifting of the barrier at Checkpoint Charlie, but it is nonetheless impressive and will not go unnoticed.

This opening act may be a head-swiveling statement, yet it seems more subtle than those made by other scissor-doored supercars. Perhaps that is because this particular Spyker, a $292,500 machine, is painted neither blood red nor lime green, like an Enzo or a Murciélago. Instead, this Laviolette is coal black, a color that its 19-inch magnesium rims handsomely complement.

Those rims replicate the propeller blades of a vintage plane, a reference to the years during World War I when the original Spyker company built fighter planes and aircraft engines after merging with a Dutch aircraft maker. The coupe’s moniker also alludes to the original brand, which went out of business in 1925: The car is named for Belgian engineer Joseph Laviolette, who helped develop the first Spyker models n the early 1900s, with company founders and coachbuilders Jacobus and Hendrik-Jan Spijker. (For marketing purposes, the brothers changed the business name’s spelling to Spyker.)

The car itself already has established some history of its own; it has appeared around the international auto show circuit since 2001. The Laviolette is the second model produced by the Dutch supercar maker, which operates under the brand name that art and auto collector Victor Muller acquired in 1997 from heirs of the Spijker brothers. The revived Spyker’s first production model was the 2002 open-topped C8 Spyder, the latest version of which finished among the top 10 in Robb Report’s Car of the Year 2006 competition.

While Spyker has built a handful of Laviolettes for European customers, it is only now offering the car in the United States. It arrives in America with its breath-stealing, flowing, organic lines intact. Its skin, stretched tightly over powerful muscles, is decorated with such automotive jewelry as highly polished aluminum air intakes along the sides and swept-back door mirrors fashioned from single chunks of solid aluminum. But it is the design of the roof that is the Laviolette’s crowning glory. Recalling a fighter jet’s canopy, this glass-paneled top has a giant center-mounted intake that feeds air to the mid-mounted Audi V-8, which is on display beneath the rear section of the glass.

These exterior features provide a prelude for what lies inside. Raise those doors and enjoy a view of what might be the most stunning automobile interior ever crafted. It is sugarcoated eye candy—from the exposed shift linkage, to the sea of quilted leather, to the machine-turned aluminum dash. Indeed, the steering wheel, also reminiscent of an airplane propeller, is such an exquisite work of art you might be tempted to mount it on your office wall.

When you slide into the Spyker’s tight-fitting seat, you do not so much sit in the car as wear it. Everything is close-coupled and within perfect reach. Your hand falls easily onto that chunky shift knob, the steering wheel is at just the right height—which is convenient because it is not adjustable—and the pedals are ideally spaced.

The Laviolette that Spyker has made available for this exclusive test-drive at Placid Lakes Airport in Lake Placid, Fla., is not equipped with a front air bag; the coupe in its present form is not street-legal in the United States. You therefore buckle into a racing-style four-point harness, which is perfect for hard driving because it clamps you into the seat as tightly as a wrestler’s body lock. But it is too restricting for everyday commuting, and it is impractical, too, because once you are buckled in, you cannot release the parking brake.

The process of firing up the mid-mounted, all-aluminum, 400 hp, Audi-derived, 4.2-liter V-8 is consistent with the theatrical character of the car: Flick up a red cover on the dash, click down a chunky toggle switch, and press the aluminum start button. Releas ing a cruise missile from a B-2 Stealth Bomber probably does not require as many steps.

At idle, the motor produces a sound that is hardly inspiring. The tick-over is more evocative of a Cummins diesel than an exotic supercar, with lots of whirring belts and chattering valves a few inches from your ears. But all that changes when you press the throttle and eight big cylinders begin exhaling through a viper’s nest of stainless steel headers. The noise blends Pavarotti with NASCAR, and adds a touch of angry rottweiler. It is the kind of deep, bellowing, mechanical snarl that is guaranteed to send a wave of adrenaline through your bloodstream.

Push the lever into first, raise the revs, step neatly off the clutch pedal, and hang on. The car lunges forward in a blaze of spinning wheels and with a thundering V-8 roar. The tachometer has no redline, so you shift at 6,000 rpm and again pour on the power. By the time you have run through all six gears, the Spyker’s speedometer could show 187 mph—or so the carmaker claims.

The Laviolette feels a lot quicker than the performance numbers suggest. After all, a standstill-to-60-mph time of 4.5 seconds is not that impressive for a supercar carrying the Spyker’s price tag, especially when a $40,000 Jeep Grand Cherokee SRT8 can reach that speed in 4.7 seconds. But that rude exhaust note and the rifle-bolt action of the Getrag 6-speeder’s shift lend a sense of exhilaration to the driving experience. True speed demons, however, might want to consider Spyker’s Stage II tuning package, which increases the power to 450 horses and reduces the zero-to-60 sprint time to just over 4 seconds.

The Laviolette may lack rocket ship acceleration, but it compensates for this deficiency with exceptional mid-range muscle. With 354 ft lbs of torque and a body that tips the scales at a featherweight 2,358 pounds, the C8 can burst out of a walking pace, even when left in fifth. This is a quality that makes the Spyker a user-friendly daily driver rather than a cantankerous, high-maintenance charger.

The vehicle’s waiflike waistline and fully adjustable F/1-style suspension endow the Laviolette with the kind of precise handling and athletic agility you expect from sports cars wearing the yellow and green Lotus badge. Point the Spyker’s nose into a pinch-tight curve, and the car sweeps around the bend as if it were running on rails, with no roll, push, or rear-end step out. The Dunlop Sport 2000s, each as wide as an oil drum, grip the pavement like Velcro on velvet.The car is a joy to drive, but it also requires compromises. For instance, the no-roll cornering comes at the expense of comfort. Because of its superfirm suspension, the car seems nervous and fidgety when traversing any surface other than blacktop that is as smooth as a pool table. Hitting a pothole sends a shudder through the car that can loosen dental work.

The C8’s massive vented brake rotors, clamped by six-piston calipers up front, can put a ripple in the earth’s crust when stomped on while the car is moving at 150 mph, but they are not as effective when driving at slow speeds, in stop-and-start situations. And parking the Laviolette requires plenty of real estate. The steering may be surgically precise at speed, but it offers the turning radius of the Exxon Valdez.

Nevertheless, the Laviolette is a remarkable machine: thrilling to drive, sensational to look at, and a true rarity. Because Spyker will offer fewer than 75 worldwide this year, it is unlikely that you will see another Laviolette pull up alongside yours. However, you eventually may spy other Spykers if the company fulfills its bold expansion plans.

Later this year, the LaTurbie—powered by an Audi W-12 engine, equipped with the same drivetrain as the Bentley Continental GT, and priced at about $346,000—will make its U.S. debut. At this year’s Geneva Salon, Spyker introduced its outrageous D12 Super Sports Utility Vehicle (SSUV) concept. This lightweight, four-door, four-seat, four-wheel-drive fastback rolls on 24-inch rims and features a 6-liter engine that produces 500 hp. It is scheduled to go into production at the end of 2007. No doubt, when it arrives here, even sans scissor doors, its entrance will be as grand as the Laviolette’s.