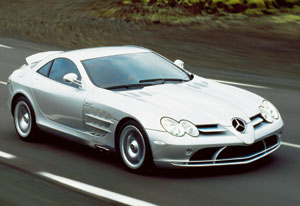 In 1954, Mercedes-Benz rolled out a vehicle so unique and so revolutionary that it gained universal praise. Not only did the 300SL Gullwing capture the eyes and imagination of the general public, but the car also drew cheers from hard-core racers, auto enthusiasts, and engineers.

Half a century of achievement and judgment has done nothing to dispel the Gullwing’s magic. Crowds at car shows and auctions still flock to the Gullwing’s muscular yet aerodynamically svelte body and timeless top-hinged doors. Collectors still pay $300,000 bounties to claim Gullwing ownership.

Now, 50 years after the Gullwing was introduced, Mercedes has constructed what the company believes will be its modern-day equivalent: the SLR McLaren, a tribute to the 300SL, the 1955 300SLR racer, and the Formula One Silver Arrow machines, updated with the latest advancements in power and technology. Like the Gullwing, the SLR was born from racing, features technology advanced for its time, flaunts a radical design, and delivers unparalleled performance. “The 300SL is one of the most fascinating sports cars in the world,” says Stefan Rohrig, head of the Classic Center in Fellbach, Germany, where Mercedes restores and maintains hundreds of its historic vehicles. “Its mystique stems mainly from the combination of timelessly compelling design and the latest available state-of-the-art technology. The same standard was used in developing the Mercedes-Benz SLR McLaren.”

Mercedes plans to build 3,500 SLRs over a seven-year run. (The $450,000 supercar already is sold out for at least the first three years of production.) While it remains to be seen whether the new car will share its predecessor’s half-century of staying power, the SLR’s performance and exclusivity lend the vehicle clout in its quest to supplant the 300SL Gullwing as Mercedes’ finest-ever machine. “It’s a Mercedes, it has all that engineering going for it, and unlike the Ferrari F40, for example, it’s a super-performance car that is civilized,” Barrett-Jackson Auction Co. President Craig Jackson says of the SLR. “It has creature comforts, and you could comfortably drive it from Phoenix to L.A.”

It is easy to understand the magnetic appeal of the SLR once you release the A-pillar-hinged gullwings, duck into the cockpit, flip the top of the gearshift lever, and push the start button exposed under the flap. When the 5.5-liter supercharged V-8 awakens, a wonderful assortment of growls, snarls, and mutters rumbles through dual stainless steel exhaust pipes that exit just aft of the front wheels. Step on the throttle, and the 617 hp machine instantly produces a rocket-ship ride. Thanks to a custom-fitted, leather-lined, carbon fiber seat that is the Formula One rendition of a chaise longue, your backside does not find itself in the trunk when 575 ft lbs of torque kick in.

The centerpiece of the SLR is the aluminum engine that AMG developed specifically for the vehicle. Nearly 80 percent of the engine’s torque is available at 1,500 rpm, providing enough low-end power for the car to accelerate in any situation. Intoxicating is the only word to describe the block’s sound; the maniacal shriek of the supercharger layered on top of the V-8’s thunderous roar prompts spontaneous—and perhaps unwise—bursts of acceleration just to urge more song from the car. Aside from some imprecise steering feedback on twisty roads and inconsistent pedal feel on the electronically controlled brakes, the SLR performs remarkably on the track and on the road.

While the engine furnishes the SLR with enough power to reach 200 mph, the car’s construction and aerodynamic design contribute just as much to the machine’s performance. In addition to paying homage to the 300SL’s form, the SLR’s long hood, truncated hindquarters, and prominent side gills are also functional. The SLR’s elongated nose provides enough room to house the engine, achieving balance as well as freeing up rear space for the trunk.

McLaren, Mercedes’ Formula One arm, sculpted the SLR’s arrowhead nose based on its racing machines. The three-pointed star in the center of the grille also serves as an air intake for the engine, while flat panels cover the underside, ensuring smooth airflow to a rear air diffuser, which in turn enhances the SLR’s grip on the road.

Even more impressive—and expensive—racing-derived safety technology went into the construction of the high-strength, low-weight, energy-absorbing carbon fiber cocoon that surrounds occupants and serves as the car’s main chassis. Mercedes spent four years and approximately $240 million developing the SLR, and a large percentage of that money was used to automate the manufacturing of carbon fiber components. The two front-end energy-absorbing crash members, for example, are formed on a computerized knitting machine that braids 25,000 extremely fine carbon fiber filaments into a complex weave of layers and angles for maximum strength. These are then baked in an autoclave, an apparatus that fuses the carbon fiber under high pressure.

The idea of gleaning technology from Mercedes’ racing efforts traces back to the SLR’s venerable ancestor. When the checkered flag waved at the conclusion of the 1952 Mille Miglia, the 300SL, competing in its first race, claimed second place. Later that year, the car won at the Bern Grand Prix, swept the top two spots at Le Mans, took first through fourth at the Nürburgring, and again landed one-two finishes at the Carrera Panamericana. The 300SL, having proved its worth on the racetrack, was poised for production.

Beyond its race-tuned performance and audacious looks, the road-going Gullwing broke new technical ground with features that were decades ahead of their time. It was the first production car to have direct mechanical fuel injection. The 215 hp, 3-liter, 6-cylinder engine pushed the SL to 150 mph, aided by a body with aluminum components and recessed door pulls that are just now coming into everyday use.

Aside from its beauty and technological wizardry, the Gullwing was—and still is—made for everyday enjoyment, which is also a proposed function of the SLR. Martin Cushway, a Londoner who owns a welding machine company,  grew up with the 300SL. Cushway still drives the 300SL Roadster that his father purchased new at the Mercedes factory in January 1963. It is the same car that shuttled Cushway’s pregnant mother to the hospital and brought a newborn Martin home five days later. He is also the second owner of a 1955 Gullwing that he considers his “almost daily driver.” Cushway recognizes the similarities between his hinged-door classic and the 617 hp luxury racer. “Mercedes has achieved what they wanted in producing a luxury sports car,” Cushway says of the SLR. “It’s the same way the Gullwing interior was more luxurious than the painted aluminum of a Jaguar XK SS or early Ferrari. And of course, there was absolutely no luggage space in the Jaguar. The SLR exterior is very striking, and, like the Gullwing, nothing else on the road looks like the SLR.”