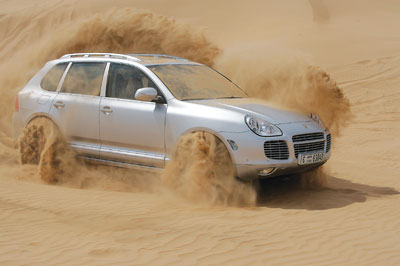 “On the gas! On the gas! On the gas!” my guide repeated as I shot up the side of a sand dune in a Porsche Cayenne Turbo S. I had left the highway only a few minutes earlier and was already sweating. Between the heat of the Dubai desert and the extraordinary requests I was making of the Cayenne, the car’s cooling system needed a break, so I had turned off the air-conditioning. “Now gently! Gently!” he said. We had reached the top of the dune and were sliding down the other side. As I turned the steering wheel to the right to follow the lead car through a shallow valley, I sent a spray of sand flying toward the windshield; a quick sweep of the wipers and we were on to the next dune.

Few Cayenne owners ever will impose this type of duress on their cars. Porsche’s first SUV is designed primarily as a high-performance vehicle with off-road capabilities and is generally treated accordingly. But in Dubai, where the city quickly cedes to desert dunes, a vehicle tends to receive a more strenuous workout than elsewhere. The emirate is therefore an excellent place to explore the car’s features.

On this visit, we tested Porsche’s new Cayenne Turbo S, the top of its SUV line (which also includes the base Cayenne, the Cayenne S, and the Cayenne Turbo). The car’s enhancements include an impressive 520 hp powerplant, 530 ft lbs of torque, and 20-inch wheels. At about $111,600, the Turbo S costs $21,400 more than the 450 hp Turbo, with its 460 ft lbs of torque and 18-inch wheels. Despite the Turbo S’s improved power, the two cars’ performance numbers are not dramatically different. According to Porsche, the Turbo S accomplishes the zero-to-60 dash in 4.8 seconds and achieves a top speed of 168 mph, compared to 5.2 seconds and 165 mph for the Turbo.

Unfortunately, Dubai’s restrictive speed limits and sizable speed bumps quashed visions of rocketing through the desert on arrow-straight roads. We had occasional opportunities to experience the Turbo S’s seamless surge of power, however, and found it more than satisfying, especially given the 5,200-pound Cayenne’s considerable heft.

Before heading into the dunes, we reduced the pressure in our tires for additional traction and received a briefing on how to drive in the sand. For those experienced in off-road trips of the rocky variety, a couple of rules hold true: Do not hook your thumbs in the steering wheel lest it suddenly swings in the opposite direction and takes your thumbs with it, and allow plenty of space between your car and the one in front during ascents and descents. In addition, while it is nearly verboten to stomp on the gas pedal when driving over rocks, doing so is virtually mandatory when maneuvering on sand. Scaling a dune requires a heavy foot, but once you have crested, you have to let up considerably. Failure to stay on the gas long enough often results in the vehicle becoming stuck, while continuing to accelerate for too long can send the car plunging into the bottom of a dune. In either case, sand will go flying, so it is wise to keep the windows shut. After some trial and error, we found our rhythm and negotiated the dunes’ peaks with some confidence.

Following a day punishing the Porsche, we retired to the Bab Al Shams resort, located 45 minutes from the waterfront. Like its sister property, the Burj Al Arab, a spectacular sail-shaped hotel with a self-appointed seven-star rating, the Bab Al Shams does nothing by halves. Approached from the dunes, it resembles a centuries-old desert fortress; once you are within its complex of courtyards, arcades, and fountains, it seems to take more inspiration from Granada’s luxurious Alhambra Palace, though without lacy adornment. Wrought-iron lanterns and grills, richly carved woodwork, low sofas, and woven rugs combine with dim lighting to create a dramatic environment that continues into the rooms.

Our trip coincided with the controversy surrounding the proposed sale to a Dubai government–owned company of the British firm that operates a number of U.S. ports. Having heard American politicians label Dubai as a possible terrorist lair, visitors might be surprised by what they find here. Over the past decade or so, the country has drawn notice mainly for its $21 million Dubai World Cup, horse racing’s richest event. It also has attracted attention for its ambitious property development, which includes fanciful, man-made archipelagoes designed to resemble palm trees and world maps when viewed from the sky; an indoor skiing center; a proposed underwater hotel; and the Burj Dubai, which its builders say will be the world’s tallest building when completed. Overall, the city is more reminiscent of Las Vegas than Riyadh.The building boom commenced in earnest a few years ago when the ruling al-Maktoum family—concerned that the nation’s oil supply, its main source of revenue, was shrinking quickly—began allowing foreign nationals to purchase real estate. With an expatriate population estimated conservatively at 80 percent, demand handily outstripped supply and created a heated, often speculative real estate market. It became the norm for residential developments to sell out within days of being announced and for properties to resell several times before ground even had been broken. Two primary developers—government-owned Nakheel and privately held Emaar—have transformed Dubai’s shoreline into an enormous construction zone, and viewing it is not unlike watching the whole of midtown Manhattan being erected simultaneously.

Dubai is hardly what you might expect of a country situated next door to Saudi Arabia. Though technically governed by Islamic Sharia law, the emirate exhibits a relaxed attitude toward Western lifestyles. Alcohol is freely available; bikinis are plentiful on beaches; and television channels, at least in hotel rooms, appear to be largely unrestricted. Road signs are in both English and Arabic, with the former more prominent. In truth, given Dubai’s large expatriate population, its native culture can be hard to discern: Much like Monaco’s, the emirate’s dominant sensibility is cosmopolitan and international. And just as in any other jet-set playground, cars such as the Cayenne Turbo S do not appear out of place; the forecourt at the Burj Al Arab, for instance, was packed with Rolls-Royces, Mercedes-Benzes, and Bentleys.

Drive Dubai’s roads and you will notice plenty of Cayennes and relatively few Porsche sports cars—demonstrating that it is primarily the SUV that has boosted Porsche’s sales to about 1,200 cars per year in this country. Not that ruggedness is the Cayenne’s only attraction: On the road, it performs with élan, especially in emergency maneuvers, and it displays all the speed, precision engineering, and attention to styling that distinguish its forebears.

When the Cayenne debuted at the Paris Auto Show in 2002, many people considered the idea preposterous: a Porsche off-road vehicle? Four years later, however, the criticisms have faded away, and the company is basking in the car’s success. Much like Dubai, which has reinvented itself as its oil reserves dwindle, Porsche has resuscitated its fortunes by venturing boldly into a new category. Assuming that this energy and innovation do not lapse, we will be curious to witness the future effects on both the automaker and the city on the Gulf.