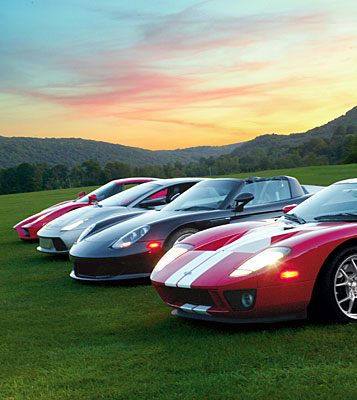 Pursuing the Ferrari Enzo up Vermont’s Mount Equinox, I ignore the snarls, pops, whines, crackles, and roars reverberating off the windscreen of my Lamborghini Murciélago. This is not the time to savor the Enzo’s aural assault. Nor is it time to worry about the Ford GT and Porsche Carrera GT in my rearview mirror. More pressing concerns are at hand. Despite the Lamborghini’s epic power and prodigious grip, I have to push both to their limits to keep pace with the Enzo’s curvaceous rump. Indeed, all four cars dance on that fine line between safety and speed.

When the Ferrari’s owner, supercar collector Richard Berry, slows for a switchback, I glimpse the Enzo’s flanks and see Berry’s profile, framed by the oddly shaped window cut out of the scissor door. Berry is not smiling; he’s too focused for that. But he is content, reveling in the power and glory of one of the world’s fastest supercars.

This power is what distinguishes the Enzo and the rest of the supercar quartet that we have assembled in Manchester Village, Vt., for a series of comparative test-drives. It can be calculated in terms of top speeds and torque, but the power also can be measured by a supercar’s ability to flood a driver’s bloodstream with endorphins, to transfix onlookers with its beauty, and to transform an ordinary September afternoon into a series of memorable moments.

As for which of the foursome—the Enzo, Murciélago, Ford GT, or Porsche Carrera GT—best embodies these supercar qualities, that question would be settled on the public and private roads around Manchester Village and the Equinox resort, our host during our four-day visit to southern Vermont. The research would not be scientific or objective; we would not attempt to determine the best supercar of the lot using the quantitative methods typically employed to assess vehicles. Instead, we want to learn which supercar is the most desirable, as measured by our visceral response to its overall prowess.

The Ford GT is the most contentious of the contenders. The notion that a Ford could compete for our affections amid such exalted company might seem dubious to some. They might even question whether the GT deserves the supercar moniker. However, just the sight of the GT as it rolls off the transporter allays such doubts about its supercar status. The GT is a modern mirror to the legendary GT40, with a retro design underscoring the qualities that made its ancestor the ultimate muscle car. The Ford GT is perfectly proportioned, low-slung, and mean. It begs to be thrashed.

When it’s my turn to do the deed, the GT’s supercharged V-8 hurls the car toward the horizon with such violence that I lose spatial perspective; I’m “there” before I can establish where “there” is. A gentle squeeze of the GT’s gigantic brakes hauls the car back to a more sane speed in less time than it takes to utter my first expletive.

When my neural network rearranges itself to cope with hyperspace, I find a delicious slice of the power band where the GT’s wounded-bear roar transforms into something more akin to God scrubbing the world with a wire brush. At this point, I run out of road long before I run out of power.

And there’s the rub. When the GT approaches the limits of adhesion, its rear end starts to come ’round. Lest we forget, the 550 hp, two-wheel-drive Ford GT has no traction control. In a straight line at 180 mph, the Ford GT is rock solid and ready for more. But around corners, it’s slow in, fast out.

Mind you, the “slow” is twice as fast as the speed with which you could approach these corners in any ordinary sports car, and the “fast” rips a hole in the time-space continuum.If you are seeking maximum bang for the buck, if you want automotive eye candy that can amble as well as accelerate, the all-American Ford GT trounces its Italian and German rivals.

In fact, our encounter with the GT is so satisfying on so many levels that I suggest titling this report “No Supercar Left Behind.” That is, until I close the Murciélago’s scissor door and press the starter button.

The Lambo’s big-bore v-12 rumbles like an approaching thunderstorm, suggesting that yes, improbable as it seems, there is a machine that can leave the Ford GT in its dust. As the beast eases out of the Equinox resort’s parking lot, the Murciélago feels heavy—heavy as in solid, strong, powerful, precise.

Charging down the same road that gave the GT pause, the Murciélago grips the blacktop as a lioness would a wildebeest’s neck. I tackle the familiar twisties without the slightest fear, at nearly twice the GT’s velocity.

The Murci’s 6.2-liter V-12 stumps up so much torque that I negotiate the country road in third gear without dawdling. But the real excitement comes at the top of the rev range. When I put pedal to metal, it’s as if I have ignited a set of afterburners. At the same time, the Murci’s powerplant screams so loudly that the hairs on the back of my neck quiver.

Although the Murciélago is equipped with an electronic handling nanny, its four-wheel-drive system is my first defense against disaster. (When the Lambo’s rear end loses grip, the system transfers excess torque to the front axle.) No matter how ham-handedly I enter or exit a bend, the Murciélago obeys my point-and-shoot directives. Many supercar aficionados would not consider such obedience a virtue. It’s troubling to sense that the Italian supercar is just a bit better at controlling its movements than the driver is. In this respect, the Murci handles like an overgrown Porsche C4. It is a supercar GT: a steadfast, stylish, and searingly quick companion for long journeys in mixed conditions. But it will not set your nerve endings on fire the way that the Ferrari Enzo will.

The Enzo makes an impact before you even enter the cockpit; its design is startling. While not everyone admires the car’s severely angular shape, no one can deny that the Enzo, from its F/1-inspired snout to its signature rear diffuser, is the Italian supercar.

Despite the Enzo’s fearsome reputation, it is not difficult to operate. Just ignore the bewildering assortment of lights, buttons, and displays, press the starter to initiate launch, flex the accelerator to blast off, pull the shift paddle when the engine howl intensifies, tickle the brakes when you want to pause, and turn the wheel to follow the road.

The Enzo difference becomes apparent when I open her up on a closed runway, pushing the carbon-fiber supercar to 185 mph without stress or strain to either of us. The Ferrari’s combination of ground-sucking aerodynamics, low weight, and extreme power make light work of repeated visits into triple digits.

To test the Enzo’s finesse, I retrace Berry’s hill climb, on which the telepathic steering and chassis let me guide the Italian road rocket with infinite precision through the curves leading to the peak. Its suspension dismisses the lumps and bumps marring the road’s surface, and regardless of the demands that I place on the engine, it always has the same response: “Andiamo!”

Berry, occupying the passenger seat, informs me that the rear-wheel-drive Enzo’s traction control is turned off.

When I switch it on, I can’t slide the Enzo around the switchbacks; the engine ignores the prompts from my foot. When I turn off the ASR, Berry warns me to baby the throttle in first and second gears. Otherwise, it will be spin city, and look out below.

His comments don’t resonate until we are in our descent. As we approach a vicious bend, Berry says, “Second gear.” I’m on it, but the tone of his voice conveys a sense of urgency. “Don’t you trust me?” I ask. “This car needs driving,” Berry replies. The Enzo is, after all, a Ferrari, and like all of the carmaker’s belle macchine, it is so alive, so responsive, that you find yourself driving faster and faster, until you suddenly realize you’re in over your head. With enough skill or luck, you will emerge unscathed, but you will never drive the car the same way again.

Understandably, the supercar collector did not want to trust his life to a stranger’s ability to gauge the Enzo’s seemingly endless limits. While the Enzo may not offer the simplicity of the Ford GT or the safety of the Murciélago, it never fails to deliver an exciting experience. By contrast, the Porsche Carrera GT represents a combination of all three characteristics, though it is not without its flaws. (Click images to enlarge)

The Porsche’s clutch is diabolical. Coaxing the German supercar to off-line smoothly, without stalling, is nearly impossible—even after a driving lesson and three days of practice. On a hill, you will break a cold sweat, or the clutch, or both. Racing clutch be damned; there is no excuse for building a $440,000 road car that makes its driver look like an idiot.

That said, once you get the GT going, it’s difficult to stop. I’m not indicting the GT’s ceramic brakes; they are powerful enough to pop a filling out of your mouth. I’m saying it is nearly impossible to stop driving this car once you start.

My addiction begins on Route 7, in third gear. As I enter under an overpass, the concrete-and-steel structure amplifies the sound of the GT’s V-10 engine. A Formula One howl fills the space with the sound of mechanical perfection. It’s a melody that reverberates in the mind long after it fades from the ears, a sound that begs to be repeated.

Soon after, on an exceptionally long and inviting exit ramp, the rear-wheel-drive GT holds its line like a giant slot car. If you think a Murciélago is easy to drive, spend some seat time in a GT. For the first time ever, my spouse urges me to drive faster. The GT’s staggeringly swift progress is limited by only five factors: sight lines, traffic, common sense, local law enforcement, and the amount of fuel in the car’s tank. Stated simply, the Porsche Carrera GT is the fastest car that an amateur can drive to both his and the car’s limits, in relative safety and comfort.No question, the Enzo is the swiftest and most charismatic of the four supercars, but the Carrera GT is just as fast in the real world, much better built, and far less intimidating. Once you resign yourself to the Porsche’s first-gear-clutch catastrophe, you are free to learn the true meaning of the phrase “racecar for the road”—without worrying about run-off areas, crash barriers, or inheritance tax.

The Porsche Carrera GT is not the world’s most exclusive supercar, and it may not be the sexiest, but for us, it is the best.