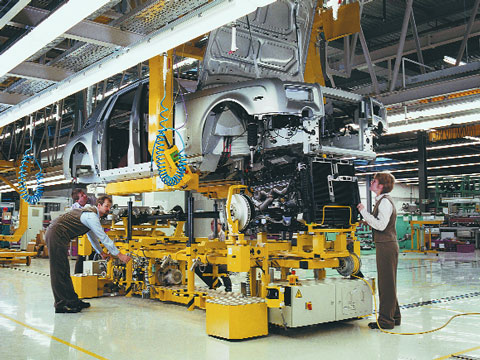 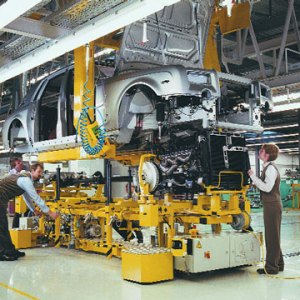 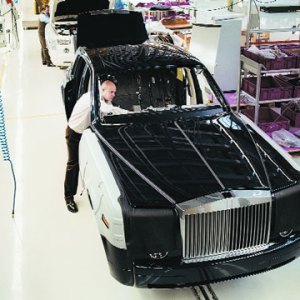 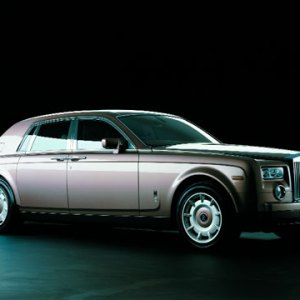 The presence of any Rolls-Royce is its past, for the marque’s provenance is a rich one. It has been in existence for more than a century, its cars owned by members of Wall Street’s old money and Silicon Valley’s new wealth and by England’s Queen Elizabeth, whose garage brims with Rolls-Royce saloons. Until recently, the cars were built in Crewe, England, where generations of families practiced the near-forgotten arts of hand-stitching steering wheels, hand-spraying bodies with 32 coats of lacquer, hand-rubbing precious woods, and hand-cutting premium hides.

Suddenly, it is all over. The right to build Rolls-Royce cars is now owned by BMW, which has crafted a radically different and magnificently huge sedan from scratch, and in secret, at its new plant that was built on 43 acres of the Sussex Downs at Goodwood, 90 minutes southeast of London. None of the old Rolls craftsmen, their tools, or their machinery made the transition from Crewe. Robots now paint the cars, lasers measure the premium hides, and those precious woods have become laminates.

So how, ask the purists, can BMW dare to call this Goodwood car, this product of a broken bloodline, a real Rolls-Royce? “A Rolls-Royce isn’t just a car, it is really a philosophy in its application to motor vehicle design and engineering,” insists Tony Gott, former CEO of Rolls-Royce Motor Cars Ltd. at Crewe, who left the old firm in 1998, observed a respectable pause, then quietly surfaced a few months later as CEO of Rolls-Royce Motor Cars Ltd. at Goodwood. “If the product that results matches that philosophy, then it is an authentic Rolls-Royce.” That philosophy, of course, was the business code coined and written by Sir Henry Royce: If it does not exist, design it; if it does exist, build it better; strive for perfection in everything you do.

In search of the complete DNA of Rolls-Royce, the new owners left no archive unturned. Members of owners’ clubs in Europe and the United States were asked to detail their history with the marque. Regal shapes and proportions, seductive sweeps, and balanced dimensions were examined on ancient drawings from the files of former Rolls coachbuilders Gurney Nutting, James Young, and H.J. Mulliner. Hundreds of classic models were driven, courtesy of Rolls-Royce collections around the world, particularly the Nethercutt Museum in Southern California. “We were defining that waftability, a word that dates back to 1909,” says George Walish, general manager of the new Rolls-Royce Motor Cars of North America. Waftability, he explains, is an automotive state that “combines several elements, including graceful and exceptionally quiet motoring, while developing effortless acceleration from smooth, low-end torque.”

With parameters and paradigm established, designers and engineers began adding substance to the soul. “The [Goodwood] mantra has always been: ‘What would Royce have done?’ ” says Gott. “How would he have started with a particular part? From a billet? With a log?”

At the plant in Goodwood, the assembly process involves far more technology and automation than it did in Crewe, where all of the detail work was performed by hand. Either way, the goal of the designers and craftsmen is the same: to achieve waftability.

Or with a sandwich of thin aluminum sheeting and walnut veneer pressure-molded by machine to form a C-pillar window frame? Gott fondles such a frame. This was not the old way, he says, when real wood was known to split, flex, and warp. “But this [laminate] is rigid, stable, light, and very strong. It will maintain those characteristics in hot and cold, wet and dry. And it’s the method Royce would have used if he were around today.”

Size is a constant component of the Rolls-Royce pedigree. The new car—which went into production in December, on sale in January even before it had been unveiled at the North American International Auto Show in Detroit later that month, and had not been given a name by the time this issue went to press—is 17 inches longer and three inches taller than the Silver Seraph it replaces.

Big engines are also typical. The new powerplant is a normally aspirated, purpose-built, 6.75-liter V-12 that develops 453 hp and a colossal 531 ft lbs of torque. Most important in terms of waftability, 75 percent of that torque is available at 1,000 rpm, which is the idle speed for most cars. Performance includes a governed top speed of 150 mph, claims chief engineer Tim Leverton, whose BMW credentials include working on the Mini Cooper and the Range Rover. But acceleration from zero to 60 mph requires only 5.7 seconds, “which is in [BMW] M5 and Porsche Carrera territory.”

The space frame is all aluminum—the largest such unit in the history of the automobile—and the instrument panel is composed of magnesium-aluminum casting. For those interested in whimsical touches, how about umbrellas stored inside the rear doors or gimballed circles in the center of each wheel so that the RR logo remains properly visible and vertical? And the Spirit of Ecstasy hood ornament is not only retracted by light impact, but also by pushing a button inside the car.

As for the exterior, designers have dipped into the Rolls gene pool and borrowed elements from the Silver Clouds and Phantoms of the 1950s, 1960s, and 1970s; the later Silver Shadows; the earlier Wraiths; and the older Sedanca de Villes. The signature features are unmistakable. The new car has coach doors hinged at the rear and square corners where sills meet pillars, allowing better passenger access and exit. The front and rear show smaller lights in contrast to deeper, heftier, and flatter surfaces. Overhangs are shorter than on the Seraph. There is a long hood to enhance stance, and the silhouette is cab rearward, with smaller windows to provide greater passenger privacy. Twenty-inch wheels emphasize the car’s muscles.

“The basic idea is that this is a classic, modern motorcar,” says Gott, sounding like a proud parent. “The idea has been to reduce frippery and brightwork. The car is really simple, and it’s not trying to be overtly complex in terms of dials and switch counts.” What is not being used simply disappears, such as the multimedia screen that revolves à la James Bond’s license plates into the dashboard to be replaced by an Art Deco clock. Even the power window controls are covered by a lid in the center console. But relax, the medieval heating and cooling portholes, with their push-pull levers, have been retained.

In a nation wedded to Shakespearean intrigue and the inexplicable rules of cricket, the transfer of Rolls-Royce production from Crewe to Goodwood, and stewardship of the marque from Britain to Germany, were understandably viewed as more Gilbert and Sullivan than Dun & Bradstreet.

In the late 1990s, vaunted, haughty Rolls-Royce was suffocating in its own must. It was lagging behind current automotive technologies. Annual production was down from 600 cars to a piddling 400. The marque had been marginalized by decades of underinvestment by its parent, Vickers PLC. Rolls buyers had turned from the whispering ostentation of the $235,000 Silver Seraph and the even more expensive Corniche to their sister cars, the better-bred Bentleys that cost less, went faster, and did not brag quite so much. Vickers, its books bleeding red, put Rolls-Royce and Bentley up for auction in 1998.

Round one: BMW, the contract supplier of engines to Rolls-Royce, and Volkswagen, which was intent on expanding its image and product line beyond Beetles and buses, went for each other’s throats. Both wanted both companies.

Round two: BMW bid $554 million, and Vickers shareholders were ready to give a nod of approval.

Round three: Volkswagen countered with a $780 million offer, and Vickers shareholders applauded all the way to the bank.

Round four: Rolls-Royce PLC, which builds aero engines and is the company that broke away from Rolls-Royce when Vickers bought the car company in 1973, threw the ultimate spanner into the transaction. It announced that Volkswagen might have purchased Rolls-Royce Motor Cars Ltd.—the company and its plant—but not the rights to the legendary brand name, nor the hood icon, nor the historic Grecian-temple radiator.

Round five: Back to the drawing board, the boardroom, and the negotiations that would make the Louisiana Purchase look like cash-and-carry. When all was said and signed, BMW had purchased the rights to use the Rolls-Royce name, and Volkswagen had agreed to lower its sights and focus its luxury car future on Bentley.

And the winner is . . . Volkswagen, which thumbed out $780 million for far less than it had literally bargained for, or BMW, which paid only a relatively paltry $65 million for the rights to a name and a couple of shapes? One issue is indisputable: Never in a century of building automobiles has there been such a strapping effort to reinvent a set of wheels. Imagine dismantling then reconstructing the Empire State Building, or reconstituting General Motors armed with only the name and the Cadillac crest—no holdover employees, no plant, no jigs, bucks, test track, metal presses, design studio, sales force, paint shop, tools, assembly line, parts inventories, executive staff, suppliers, overseas offices, electrical bays, or quality control. In effect, nothing but your own talent.

Worse, as part of the agreement with Volkswagen, members of BMW’s Project Rolls-Royce, headed by managing director Karl-Heinz Kalbfell, were prohibited until midnight on December 31, 2002, from discussing their work, allowing outsiders into the plant, showing the new car, or revealing any of its technical details. Legal constraints were so tight that if Kalbfell had been asked to pose for a photograph with any Rolls-Royce vehicle or the company logo, management would have declined the shot because it might be seen as an attempt to publicize the new venture.

Within this security of silence, BMW began culling its own ranks while reaching outside and into the old guard of Rolls-Royce to find a dream team. Ian Cameron, the seer who drew the new and instantly accepted Range Rover, was named design director. Gott returned.

Even 83-year-old John Blatchley, the former chief styling engineer for the revered Rolls-Royce Silver Ghost of the 1950s, had his comfortable retirement interrupted by younger successors in search of counsel.

The design and engineering team worked from the ultimate safe house, an empty Westminster Bank building on the Bayswater Road near London’s Hyde Park. Six designers were each charged with producing plans for two exteriors and two interiors. A hybrid of plastic and fiberglass was created, and the prototype went on the road for selected showings to private parties sworn to secrecy. This was a Rolls of many colors: two-tone paint on one side, monochrome on the other, different door panels here, mismatched wheels there, and a variety of woods and linings around the interior.

In the end, exterior designer Marek Djordjevic, just 34 years old, and veteran BMW interior designer Charles Coldham were selected to author the latest chapter in the Rolls-Royce lore. Win, lose, or draw, Djordjevic and Coldham are the names that history books will credit or disgrace but certainly commemorate for eternity as Rolls-Royce enters a new era.

The designers, however, are confident of the success of their car. For early in the process, they invited guru Blatchley to view their drawings and photographs, specifications and blueprints. He pored and muttered over their books, then he spoke: “There’s only one Rolls-Royce in here.”

And he pointed to the Djordjevic-Coldham design.