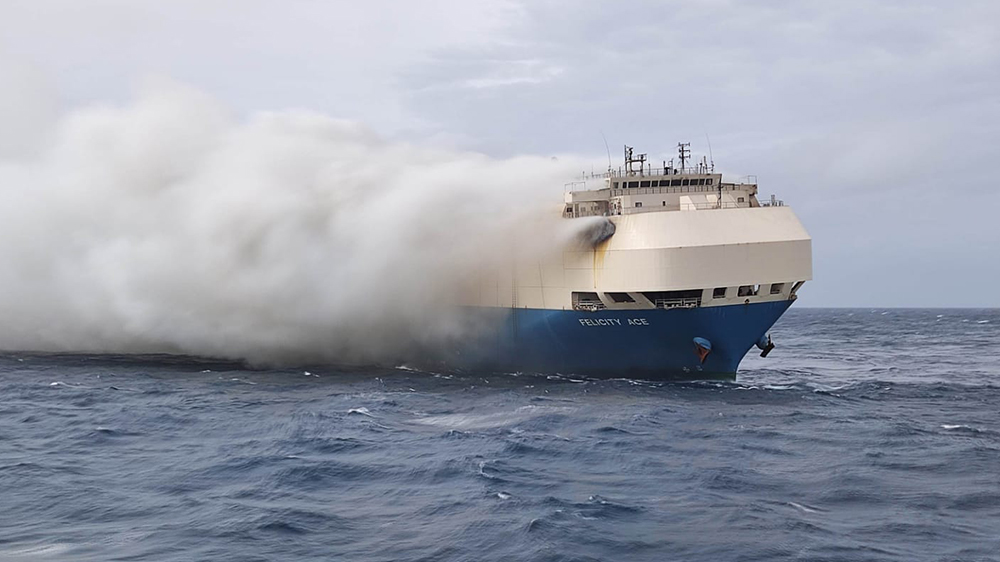 The sea has finally claimed the Felicity Ace after weeks of worldwide intrigue.

The cargo ship, which caught on fire while ferrying over 4,000 Porsches, Bentleys and Lamborghinis across the Atlantic in the middle of February, sunk on Tuesday morning, according to Bloomberg News. The unexpected development extinguishes any hope of salvaging any of the vehicles.

The Felicity Ace sank about 250 miles off the coast of Portugal’s Azore Islands around 9 a.m. local time. The boat was in the process of being towed back to land when rough waters caused it to go down, Singapore-based MOL Ship Management confirmed.

“The weather was pretty rough out there,” Pat Adamson, a spokesperson for MOL, told the news agency. “And then she sank, which was a surprise.”

The 650-foot-long cargo ship, was on its way from Emden, Germany, to Davisville, Rhode Island, when it caught on fire on February 16. Nearby commercial ships and a helicopter were able to evacuate the boat’s entire 22-person crew without injury, but the blaze would rage for days. When the fire finally went out on February 25, a salvage team was dispatched to tow the boat back to land.

The fire onboard the Felicity Ace made international news, thanks in no small part to its headline-grabbing cargo. The boat was carrying 3,965 Volkswagen AG vehicles, including 1,110 Porsches, 189 Bentleys and at least 21 Lamborghinis (an unknown number of Audis were also said to be onboard). The cars and SUVs were likely lost once the fire started, but Tuesday’s news confirms that none will be recovered, according to The New York Times. The cost of the loss is expected to run at least $155 million, although much of that will be covered by insurance. Volkswagen told the newspaper that it is already at work replacing the lost vehicles.

Now that we know the fate of the Felicity Ace and its cargo, attention will now turn to the ecological impact of the incident. A “small patch of oily residue” was visible after the boat sank, the Portuguese Navy told Bloomberg. A clean-up crew had already started trying to disperse the oil with water cannons, and divers and more equipment were expected to be dispatched to the area to help with the cleanup.