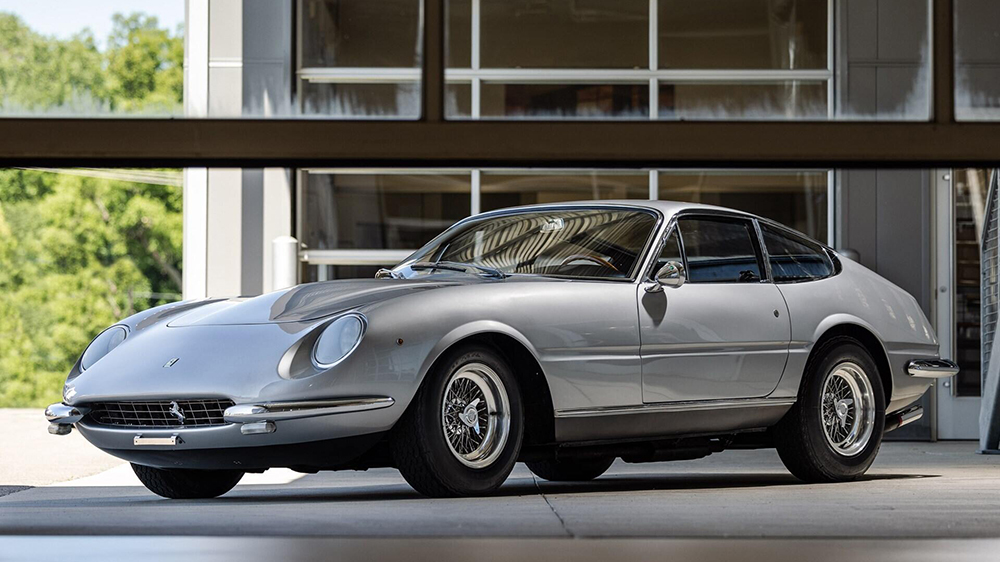 A prototype of one of Ferrari’s most beloved models is set to go up for grabs next month.

RM Sotheby’s will auction off a stunning pre-production example of the Ferrari 365 GTB/4 during Monterey Car Week. The silver speed demon is one of three prototypes made before the final Scaglietti-built grand tourer made its debut at the Paris Salon in 1968.

As legend has it, Ferrari only built the 365 GTB/4 because its factory wasn’t ready to start production of a planned rear-mounted inline-12 model. Instead, it decided to build one last car with its long-running front-engine “Colombo” short-block V-12. Combine that potent mill with gorgeous coachwork by Pininfarina and you end up with the 365 GTB/4, or Daytona as its better known to collectors and enthusiasts. The car’s nickname—meant to commemorate the marque’s 1-2-3 finish at the 24 Hours of Daytona in 1967—is purely unofficial, but that hasn’t stopped it from sticking around for decades.

This particular example is the second of three Daytona prototypes built before the car made its debut in October of 1968. Ferrari was still clearly figuring out what it wanted the 365 to be, so its features a chassis (no. 11001) and a numbers matching 3.3-liter four-cam type 226 engine from its predecessor, the 265 GTB/4. It also featured several design elements that wouldn’t make it to production, including a longer nose, oval eggcrate grille and recessed headlamps.

Despite the differences between the prototype and the final production model, the early Daytona is still a beautiful car. It’s finished in the original coat of silver that it left the factory in. Meanwhile, its two-seat cabin is covered in black leather and has a three-spoke, wood-rimmed steering wheel. It also comes with Ferrari Classiche certification and the new owner will get its Red Book once it’s printed by the marque.

Inside the 365 GTB/4 Prototype by Scaglietti  RM Sotheby's

The 365 GTB/4 prototype will hit the block as part of RM Sotheby’s multi-day Monterey Car Week sale, which will be held at the California city’s conference center from August 18 to 20. The auction house hasn’t announced a pre-sale estimate for the car, but early examples of the model have regularly sold in excess of $500,000. Just imagine how much one of its prototypes will go for.

Click here to see all the photos of the 1968 Ferrari 365 GTB/4 Prototype by Scaglietti.