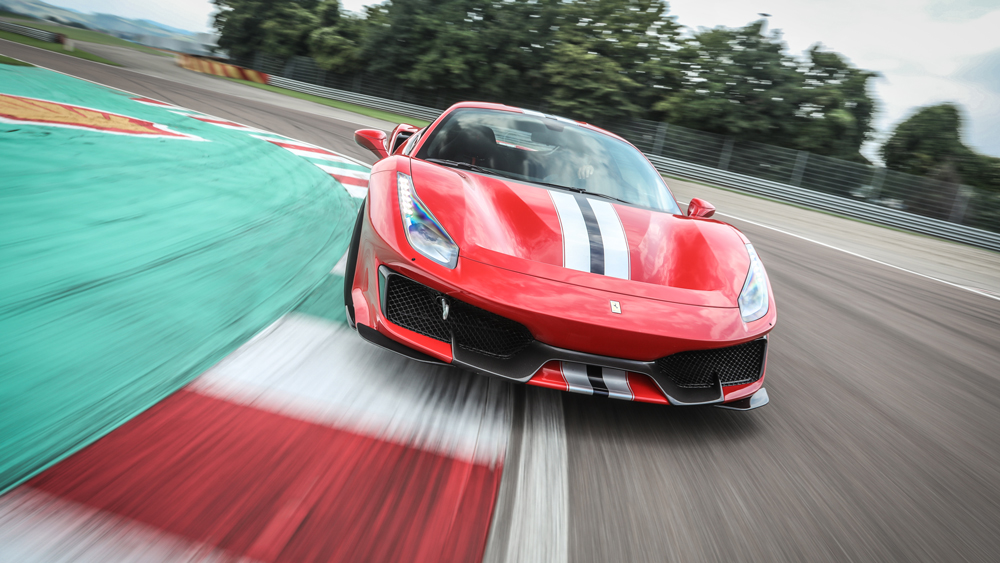 The weight of history rests heavy at Fiorano, Ferrari’s private test track near company headquarters in Maranello. The small circuit is hallowed ground for the speed obsessed, a place where legends like Michael Schumacher logged lap after painstaking lap in pursuit of Formula 1 perfection and test drivers like Raffaele de Simone have explored the bleeding edge of supercar performance.

This isn’t my first journey to Fiorano, but every visit here feels special—however, this time in particular takes on a different timbre because the car I’m here to drive, the Ferrari 488 Pista, departs from many of the 70-year-old sports car manufacturer’s conventions. More on that in a bit.

The 488 Pista, named after the Italian word for “track,” is the latest in a string of high-performance spinoffs from Ferrari’s mid-engine V-8 models. The trend started with the 360 Challenge Stradale and continued with the 430 Scuderia and 458 Speciale: fiercer and more track-capable than their standard issue counterparts, these variants have become holy grails among collectors not just because of their relative rarity, but because they have a way of distilling and enhancing the essence of what makes a Ferrari a Ferrari. That said, here’s a sobering statistic that reflects the new car’s blistering speed: the Ferrari 488 Pista can lap Fiorano only 1.8 seconds behind the LaFerrari, the limited production, 950 horsepower, $1.4 million antecedent that once stood at the pinnacle of the Ferrari lineup.

Virtually no aspect of the 488’s performance hardware has gone untouched in pursuit of ultimate speed, and its 710 hp engine is the most powerful road-going V-8 in company history—a particularly significant milestone at a time when global regulations are making it more difficult than ever to adhere to noise and emissions regulations.

But lap times and engine output are all but irrelevant when I’m strapped into the Pista’s racing-style shoulder harness seatbelts and ready to experience this complex machine by the seat of my pants. Instead of lapping Fiorano first (which is arguably its more natural habitat), I’ve been assigned a drive on the hilly roads surrounding Maranello. “This’ll be a good chance to acclimate to the car before I drive it on the track,” I tell myself. But I quickly recognize my own lie: wielding this level of ballistic-grade vehicle on public roads is tantamount to unsheathing a lethal weapon in a place of worship. The Pista’s race-derived hardware is practically obscene for the road… but on the other hand, if there’s an appropriate place for a spirited street drive, it’s along the rambling hilly roads surrounding Maranello, where octogenarians regularly fling small displacement hatchbacks at a pace that would impress a racing instructor.

On the road, the Pista is a missile fired into the Maranello countryside.  Photo: Courtesy of Ferrari.

Wearing sharply sculpted bodywork with some surfaces entirely eliminated in order to enhance aerodynamics and downforce, the Pista looks nearly as nasty as the 488 Challenge race car that has inspired it. But when the twin-turbocharged, 3.9-liter V-8 comes to life and fills the cabin with a raw hum (thanks to the less restrictive exhaust and the removal of sound-deadening material), the point is driven directly to your chest cavity: the already quick 488 GTB takes on a transformative shift in this new iteration, and it’s palpable even before you’ve started moving. With carbon-fiber door panels, aluminum floor panels and extensive lightweighting throughout, the mood inside is incrementally more purposeful and unfiltered. With half of its engine components upgraded, 20 percent more hp, and no fewer than 198 pounds shed in the interest of punchier acceleration and sharpened agility, the 488 Pista can reach 62 mph in 2.85 seconds and achieve a top speed of 211 mph, resulting in a dramatically more focused feeling on the road. Leave the transmission in automatic mode, and the 7-speed dual-clutch shifts with unobtrusive smoothness. Override the computers by tapping on the tall carbon-fiber paddles, however, and the gear changes become staccato and sharp, thanks in part to a new shift strategy Ferrari describes as “shotgun + overtorque”—one of the key ways Ferrari has chosen to differentiate the Pista from past performance-enhanced models.

The pilot’s position, from where the Pista can be driven from zero to 62 mph in 2.85 seconds.  Photo: Courtesy of Ferrari.

From the driver’s seat, it feels like the engine’s prodigious power can’t be contained by merely tapping the paddles; between upshifts there’s a pulse of power forward and a noticeable engine-braking effect when downshifting at high rpms. Hold the throttle and the Pista accelerates with ferocious, mind-warping speed; slam the brakes, and a similarly exhilarating force brings the car to a violent stop. Exploring the vehicle’s vast powers on the road quickly becomes an exercise in futility, as it devours traffic gaps with near instantaneity. Similarly, dicing through corners yields agile, flat cornering that invites high entry speeds and even quicker exits. Leave the manettino (the small machined-aluminum dial on the steering wheel) in Race mode, and there’s still considerable curtailing of engine power that leaves some speed on the table but ensures tidy, not slide-y, handling.

It isn’t until I arrive at Fiorano later that afternoon for lapping sessions that I develop the gumption to dial the manettino into “CT Off” mode, which unleashes more of the engine’s power and permits tire sliding shenanigans. The track, though certainly a more appropriate venue for pitching a high-powered sports car sideways, still presents its own psychological hurdles for someone who would prefer that the invitations to Maranello not come to a screeching halt because of a momentary misjudgment.

A peek inside the 488 Pista’s race-inspired interior.  Photo: Courtesy of Ferrari.

It is here, in the anything-goes environment of the closed circuit, where I gain the confidence to push the Pista harder. It’s also here where I’m able to experience Ferrari’s first-ever brake vectoring system, which uses the massive carbon-fiber stoppers to help steer the car. The sensation is seamless but effective: The Pista tucks into turns with ease, and is easier to position into the apex before power is applied and it hauls out of the corner, responding to the right pedal with a ferocious appetite for acceleration. The car’s complex traction and stability control systems are calibrated to enable just enough tire spin for ultra-quick laps. For this reason, the Pista is the first Ferrari to achieve its fastest lap time with stability control engaged, not switched entirely off.

Though the Pista feels willing, able and eager to tame Fiorano’s corners and make its pilot feel like a hero, I manage to successfully resist the inevitable red mist and instead maintain a brisk, but not breakneck pace. After a second session on the track and the obligatory drifting exhibition for the camera, it’s time to bring the screaming Italian back into the pits and wrap up my time at this very special place.

Pushing the Pista farther and faster at Fiorano.  Photo: Courtesy of Ferrari.

While Ferrari is inarguably one of the raciest carmakers on the planet, the 488 Pista inherits hardware directly from its racing stablemate that injects a taste of that ineffable quality into a package that is both street legal and track ready. Given that priority towards performance, it’s no surprise that Pista customers are, according to Ferrari data, more deeply embedded into the world of race tracks: not only do one quarter of them already own special-series V-8 Ferraris, 60 percent regularly participate in track events.

Those fanatics make up an important segment of the Ferrari-buying population, but at the end of the day, it is the learnings from a place like Fiorano—and the hard-earned lessons from endurance racing—that make cars like the 488 Pista incrementally more special.