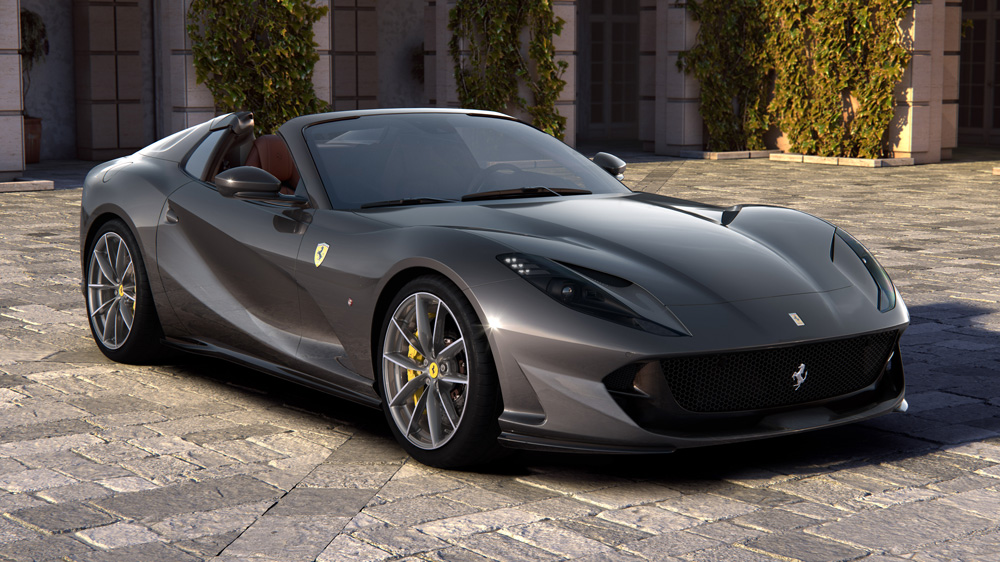 “I married the 12-cylinder engine and I never divorced it,” once noted Enzo Ferrari. Despite Enzo having passed away more than 31 years ago, his love affair continues to burn on, as evidenced by this morning’s debut of the Ferrari 812 GTS next to the marque’s test track at Fiorano Modenese, Italy. The new convertible actually rekindles an old flame in that it’s the first production V-12 spider to feature a front-engine configuration in 50 years. It’s also being touted as the most powerful production convertible currently made.

Its predecessor, the acclaimed 1969 365 GTS4, became commonly referred to as the “Daytona Spider” in honor of Ferrari’s sweep of the 1967 24 Hours of Daytona. “Our connoisseurs look for the connection with tradition and heritage,” says Enrico Galliera, Ferrari’s chief marketing and commercial officer, during the press conference. “And the V-12 is part of the DNA of the company.”

But while the 1960s sensation was powered by a 352 hp, 4.4-liter Colombo V-12, the new open-top model—priced starting at roughly $371,000—takes its performance and design cues directly from Ferrari’s 812 Superfast. Under the hood lies a naturally aspirated 6.5-liter V-12 that kicks out 789 hp and 530 ft lbs of torque. That heart, mated to a seven-speed dual-clutch gearbox, enables this 21st-century GTS to launch from zero to 60 mph in less than 3.0 seconds, hit 124 mph in 8.3 seconds and top out at 211 mph—performance and power-train specifications shared with its sibling.

A primary factor to the new GTS losing practically no ground to the Superfast coupe is that a majority of the latter’s aerodynamic attributes have been maintained in the body design. “Honestly, when we started this [812] project, it wasn’t planned to make an open version. But working with engineers, we found it was possible to have a good proportion and a good variation of the shape of the 812,” explains Flavio Manzoni, Ferrari’s senior vice president of design. “Actually, the retractable hardtop was probably the most difficult aspect to be solved.”

The reshaped rear stands apart from that of the 812 Superfast coupe.  Photo: Courtesy of Ferrari.

But what began as the main challenge for Manzoni and his team when it came to this particular marriage of form and function eventually became one of the car’s most innovative additions. The retractable hardtop, which can open and close in 14 seconds while the car travels as fast as 28 mph, does not compromise the size of the cockpit or the body’s structural rigidity. To accomplish this, however, necessitated reworking the back of the vehicle to account for luggage space and storage for the roof as well. The latter finds a home under the tonneau cover tucked between a pair of new buttresses.

The top can open or close in 14 seconds, even at a speed of 28 mph.  Photo: Courtesy of Ferrari.

“The predecessors were cabriolets with soft tops, so the architecture was completely different,” says Manzoni. “This spider version doesn’t contradict the 812 Superfast, it keeps the fastback effect thanks to the fins and buttresses.”

To help maintain not just the fastback’s overall aesthetic but also aerodynamics, the convertible’s needed enhancements include a triplane wing as part of the rear diffuser for increased downforce, and drag-reducing air vents at the rear. Air flow was also a focus for the cockpit when it’s sans roof. Behind the seats, an air channel and aerofoil front the buttresses and help vent interior pressure buildup. The electric rear screen provides a barrier to the wind but can also be lowered to allow a bit more of the outside in when the top is up.

The pilot’s point of view.  Photo: Courtesy of Ferrari.

In the handling department, the GTS remains steadfast to the driving dynamics of the Superfast. Among the standard features are electric power steering and systems such as Ferrari Peak Performance (level of steering-wheel torque warns driver when traction limits are being reached), Virtual Short Wheelbase 2.0 (for improved vehicle agility), and the latest iteration of Side Slip Control (allowing pilots to push the envelope without it punching back).

“This is a new interpretation of the spider,” says Manzoni. “It’s a coupe and a spider at the same time.” In other words, something to seduce everyone.