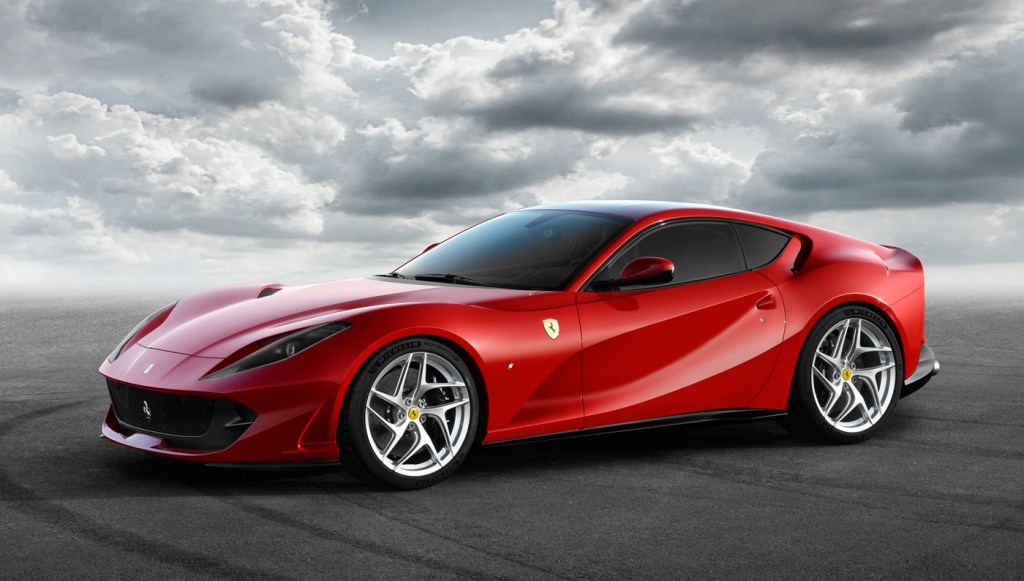 Ferrari is celebrating its 70th anniversary by providing the company’s fan base with quite a present, the new Ferrari 812 Superfast—a vehicle that more than lives up to its name. Ready to be revealed at the 87th Geneva International Motor Show (to be held March 9 through 19), the boundary-breaking beauty is not only the quickest pony in the Prancing Horse stable, but it has more kick than anything the marque has ever made.

Using the F12berlinetta (introduced in 2012) and the F12tdf (debuted last year) as a launching point, the front-engined 812 Superfast introduces a 6.5-liter V-12 that produces roughly 789 hp and about 530 ft lbs of torque at 7,000 rpm. Of that torque, 80 percent of it can be tapped at 3,500 rpm due to the innovative integration of a 350-bar direct-injection system as well as a variable intake configuration inspired by Formula 1 race engines. With a dual-clutch transmission as part of the package, the coupe can conquer zero to 62 mph in 2.9 seconds and reach a top speed of 211 mph.

An intimidating steed indeed, the car features an aesthetic of lean brawn, the automotive version of a mixed martial artist or ninja (and it doesn’t hurt that the rim work resembles throwing stars). In order for the 3,362-pound performer to more effectively slice through the air, active flaps on the underbody and a rear flank by-pass are part of the aerodynamic accents. Sculptured door panels and the hood’s air intakes are complemented by pronounced wheel arches to enhance the kinetic design cues of the front and sides while the elevated tail pays tribute to the 1969 Ferrari 365 GTB4. In all, a strapping visual statement made by the Ferrari Styling Centre. And as another nod to the marque’s seven decades of operation, the 812 Superfast is being offered in the commemorative color Rosso Settanta (“red seventy”).

Handling is honed by an array of electronic assists that include Side Slip Control (SSC), Virtual Short Wheelbase 2.0 (PCV) for improved response time, and Ferrari’s first use of Electric Power Steering (EPS).

The cabin combines traditional craftsmanship with futuristic flair, including the dash’s air vents that resemble rocket turbines. Also on board is a new steering wheel and instrument cluster as well as a top-tier infotainment component.

The latest model, however, is just one of the recent reasons that the luxury automaker has to sound its own horn. On February 17, the independent group Brand Finance reported that Ferrari is currently the world’s strongest automobile brand (based on the consulting firm’s specific metrics). In addition, it was cited that the marque’s more commercial approach of late (which includes being traded on the New York Stock Exchange) has contributed to an increase of 40 percent in Ferrari’s overall value, now estimated to be a total of $6.15 billion. (ferrari.com)