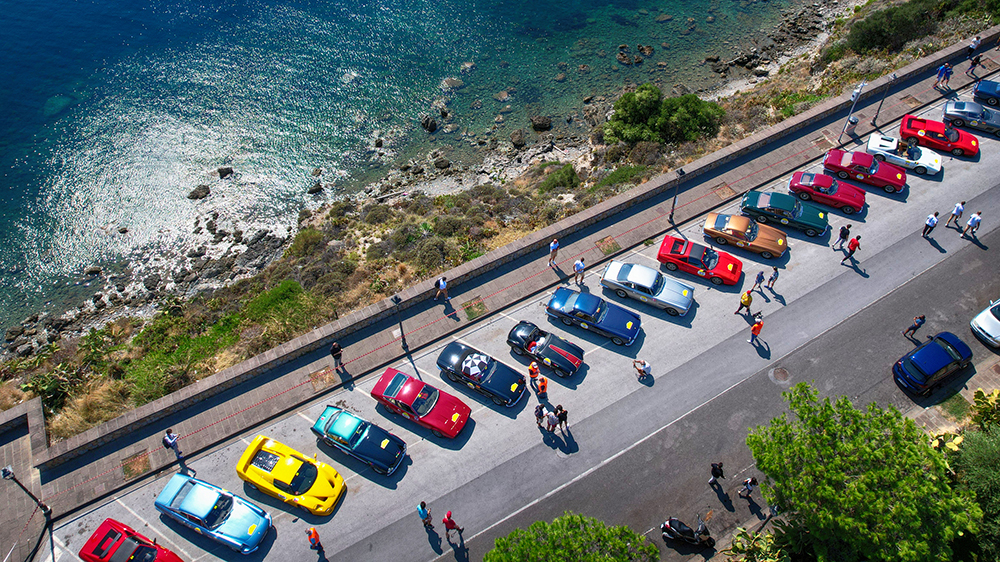 It must be galling to buy your first new Ferrari, only to discover that the purchase of your $300,000 car unlocks just the initial level of privilege and access within the world of the Prancing Horse elite. The climb up Ferrari’s customer ladder is long, winding and extremely costly, requiring the acquisition of multiple examples of the marque’s rarest and most expensive models—by invitation only, of course—and participation in some of the inventive ways the brand has for you to spend money with it, such as the Challenge race series or the F1 Clienti track-car program.

The annual—and ultra-exclusive—parade of Prancing Horses, where residents come out of their homes to help celebrate the marque.  Courtesy of Ferrari

And the top rung of that ladder? It just may be Cavalcade, an annual four-day road rally organized by Ferrari in a different Italian region each year. It costs nearly $30,000 per car, and that’s just the start. Shipping your vehicle to Italy, which might cost just as much, is on you—note that some of your fellow participants will fly in both an open-air model for sunshine and another, with a roof, in case of rain—as is covering additional rooms for your entourage. For the hard-core Ferrari obsessives, none of this is a deterrent: In mid-September, the private aviation terminal closest to the hotel for this year’s event in Sicily was booked solid.

Classic and rare Ferrari models seen on the streets of Italy during Cavalcade.  Courtesy of Ferrari

But before you start readying your bank transfer, you’ll first need to be invited. For some, it’s the invitation of the year; Reno De Paoli, Ferrari’s global head of marketing, says some clients organize their entire summers around Cavalcade, and after piloting a humble 812 GTS in this year’s rally I understand why. Seeing a single Monza or LaFerrari in the wild is an event in itself, but with Cavalcade you’re part of a steroidal convoy of 100 of Ferrari’s rarest modern cars, along with 50 iconic classics, over some of Italy’s best driving roads. All of this is done, naturalmente, with the support of the local carabinieri. Coffee and lunch stops are often held in private villas, while the dinners feature spectacular entertainment—think dancers etching rivers of fire into a moonlit beach.

The only downside? Fear of missing out. “It’s absolutely bonkers,” one young British property magnate with a string of Ferraris told me. “Once you’ve got a taste for this event, you just want to stay on the list.”