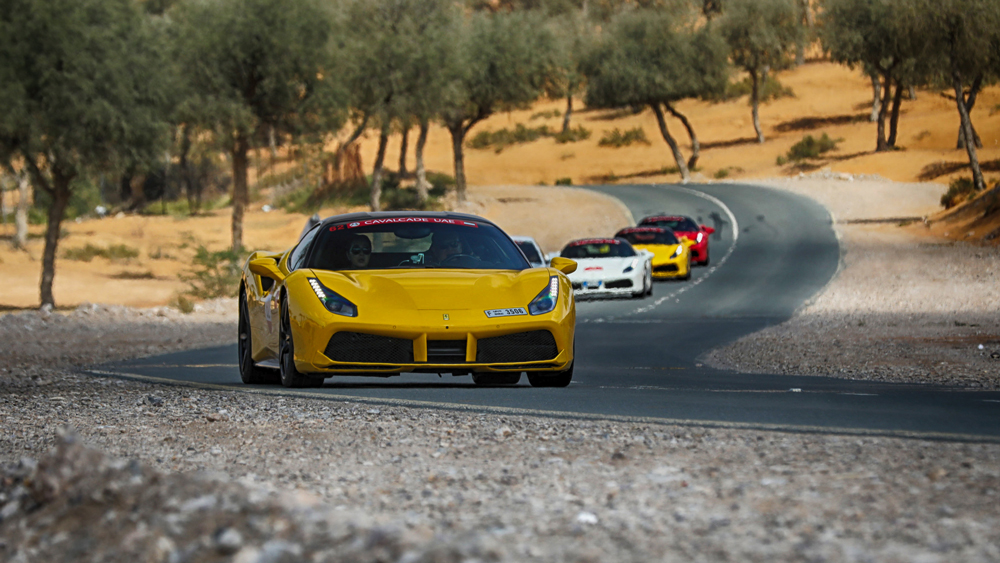 A quarter of a century ago, Ferrari first arrived in the United Arab Emirates, and to say the Prancing Horse has been a wild hit in that part of the world is an understatement. To mark the 25-year anniversary, Ferrari organized an International Cavalcade across the desert cities and states, drawing more than 100 incredible bella macchinas from more than 20 different countries.

The 750-mile route was meticulously scouted by Ferrari’s team, and so chosen to give owners the maximum amount of exhilaration. The roads in the UAE region are some of the best in the world, beautiful inky ribbons of asphalt that slice and wind through the sand-hewn area. The three-day route began in Dubai before the caravan headed through the desert hairpins of Jebel Jais mountain, then back over to a special stop at the foot of the Burj Khalifa, which had been lit in a red hue in honor of the Ferraris. The Gulf Coast was also on the itinerary, with stops in Abu Dhabi to visit the world’s largest mosque, the Sheik Zayed Grand Mosque.

That beautiful scenery is mesmerizing, but those Ferrari owners must have needed to be careful with their powerful Italian steeds. Speed limits in some of those regions, like Abu Dhabi, is limited to 80 kph (about 49 mph) and the penalties for a lead foot include enormous fines—or jail.

But this wasn’t the Cavalcade International’s first outing—it’s the third, technically—so the route included a few stops where the Ferraris could properly sprint, including the Dubai Autodrome, which famously plays host to the Dubai 24 Hour race, where the owners got a chance to open the throttles wide. Later, more chances for adrenaline came outside the vehicles at Ferrari World Abu Dhabi, the region’s largest theme park based around the brand. To cap the tour, 12 of the cars staged together in the form of the UAE flag.

While Ferrari won’t note the exact models and cars that participated, you can see multiple 488 Pistas and at least one LaFerrari, but no Classiche models—though an F40 did stop by for the parade through the park. Check them out in motion here.