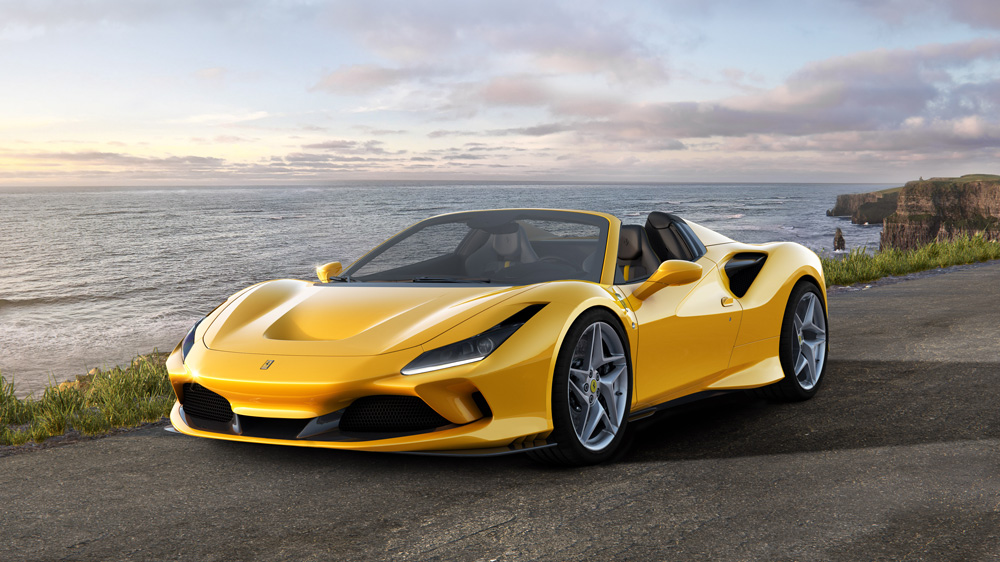 The past few days have been banner ones for Ferrari. On Sunday, Charles Leclerc finished first in the Italian Grand Prix driving for the Scuderia Ferrari Formula 1 team—a checkered flag the squad hasn’t captured on home soil in eight years. The Prancing Horse marque followed that winning feat on Monday with two more, unveiling both the Ferrari 812 GTS (that we reported on earlier) and the F8 Spider—the first time in the company’s history that it has debuted multiple models at once.

While the 812 GTS is a front-engined homage to Ferrari’s rich V-12 heritage, the F8 Spider represents the growing role of V-8 variants for the road ahead. A convertible version of the F8 Tributo, it will take the place of the 488 Spider. And though a top-optional 812 Superfast was not originally part of the planning process for that particular model, it’s safe to assume that an open-air sibling to the eight-cylinder Tributo was always on the drawing board.

“I think it was probably a more natural integration of the open roof in the F8 Tributo. It’s very affective if you look at the car,” says Flavio Manzoni, Ferrari’s senior vice president of design. “Although, the characteristics of the rear of that car are quite complex. We had to fight a lot to find the perfect balance between all of the elements because there are thermal aspects, aerodynamic aspects plus the roof panels. So you can imagine the complexities of all that, but the result is very beautiful—it’s full of character.”

Primary factors to the F8 Spider’s overall character are two-fold. Obviously, the retractable hardtop is what truly differentiates it from the Tributo. As with the roof on the 812 GTS, this one can also be opened or closed in 14 seconds and operated at a max cruising speed of 28 mph.

The F8 Spider has 58.5 percent of its weight distributed at the back.  Photo: Courtesy of Ferrari.

Not as visually obvious but certainly as visceral, if not more so, is the F8 Spider’s mid-rear-mounted eight-cylinder heart. The 720 hp, 3.9-liter turbocharged brute delivers 568 ft lbs of torque and presents no turbo lag. Its laurels not only consist of repeatedly being named the International Engine of the Year since 2016 (as determined by a select group of automotive media), but was also chosen as top engine of the last 20 years by the same competition. No surprise, since it’s the most powerful internal combustion V-8 the marque has ever made, even with the addition of a gasoline particulate filter to meet new homologation measures.

“This is the first time that we have put on a Ferrari a gasoline particulate filter, so this cost us a little bit of performance that we had to recover,” explained Michael Leiters, Ferrari’s chief technology officer, during the vehicle’s official presentation. “For 720 hp at 8,000 rpm, we worked on the intake and the cooling layout to support the power increase. We worked on the intake plenum and runners to have more efficiency on the intake side and, very important, we put a speed sensor on the turbocharger to utilize maximum power.”

The retractable hardtop opens or closes in 14 seconds and can be operated at a top speed of 28 mph.  Photo: Courtesy of Ferrari.

When asked what he felt were among the greatest challenges to the engine’s development, Leiters was forthcoming. “With the gasoline particulate filter, it’s really difficult to recover horsepower and, at the same time, not lose any sound,” he mentions. “We have a new system on board which takes the pulsations of the exhaust gas behind the turbo compressor and brings these pulsations directly to the cabin. So, what others do on the aspiration side, we are doing on the exhaust side, which is very complicated. When you find new technological solutions, it’s always very satisfying.”

Equally thought out was the approach to aerodynamics. “It was very interesting to work shoulder-to-shoulder with the aerodynamicists, notes Manzoni, “especially on the rear section of the car because it was necessary to have a larger rear spoiler and satisfy heat evacuation from the engine.”

The rear of the F8 Spider has been revised from that of the Tributo and includes a larger rear spoiler.  Photo: Courtesy of Ferrari.

But the front section features innovative approaches as well. When comparing it to the 488 Spider, Leiters comments: “The drag is the same but the vertical downforce is increased by 10 percent. One key element is the S-duct which is derived from a Formula 1 concept. The air is deflected by the front in the form of an “S” and this force pushes on the front axis and increases the vertical downforce.” This is comforting when you consider that the power train, which includes a seven-speed dual-clutch F1 gearbox, allows the car to cover zero to 62 mph in 2.9 seconds while on its way to a top speed of 211 mph.

Pilots benefit from the latest version of Ferrari’s Side Slip Control system for added confidence in the corners.  Photo: Courtesy of Ferrari.

Another improvement over the convertible 488 model is a weight savings of 44 pounds, bringing the new car’s dry weight to 3,086 pounds. That, combined with more power, means that the F8 Spider—with 58.5 percent of its weight distributed at the back—has been given enhanced handling systems that include the sixth iteration of the marque’s Side Slip Control system. The latter now includes the Ferrari Dynamic Enhancer Plus, which works with the brakes to enable the pilot to stay at the boundary of traction. “This is not a stability controller, this is a fun controller,” says Leiters. “Those who test this car will see how easy it is to go to the limit and stay there.”

This Spider sprints from zero to 62 mph in 2.9 seconds and tops out at 211 mph.  Photo: Courtesy of Ferrari.

Not close to its limit, however, is Ferrari when it comes to advancing design, power and performance. The two latest debuts are already among four new models revealed this year alone, with one more promised. And while the V-12 engine remains a core pillar of the Prancing Horse, the F8 Spider—priced starting at roughly $289,000 with deliveries beginning later next year—is another indication that Ferrari’s V-8 may be the new linchpin to its legacy.