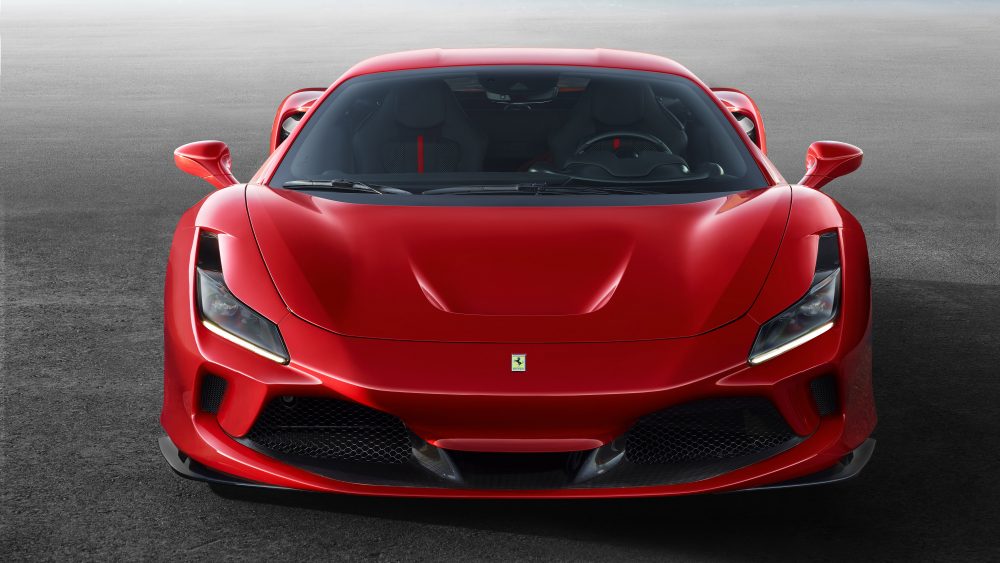 Ferrari’s F8 Tributo is the latest in a glorious line of mid-engine, eight-cylinder stallions that have defined the popular image of the brand since 1975, when the 308 Gran Turismo Berlinetta (GTB) was introduced. Look no further than the Magnum P.I. television series to confirm cultural impact: Tom Selleck drove a 308 variant in the top-rated 1980s original, and Jay Hernandez pedals a Ferrari 488 Spider in the show’s recent reboot.

“F8 Tributo weighs an impressive 40 kilograms [88.1 lbs.] less than the 488 GTB,” says Michael Leiters, Ferrari’s chief technology officer. “The biggest area is the engine where, with the adoption of the same power unit as in the 488 Pista, we were able to shed 18 kg [39.6 lbs.] thanks to the adoption, for example, of Inconel exhaust headers, titanium con-rods and a lightweight optimized flywheel.”

To improve on-road driving, the engine has slightly different calibration compared to the narrowly track-focused Pista. Saving 40 pounds from an engine already so compact and light is an accomplishment that almost defies understanding. Inconel has been with us for more than 80 years, but newly developed forms of this super-alloy are ideal for use in ultra-high-temperature applications. SpaceX has developed a version for use in rocket engines. Titanium connecting rods lower the weight of the moving parts, and that means revs rise and fall that little bit quicker in F8 Tributo.

“Other weight-saving moves include a carbon-fiber rear spoiler, lighter polycarbonate front and rear bumpers, and the rear screen formed in Lexan instead of glass, which saves nearly five kilos [11 lbs.],” says Leiters.

Less weight combined with 49 more horsepower than the 488 equals stirring performance. If the 488 had virtually no perceptible turbo lag, then this version will essentially have none. Instant access to power, instant access to the pleasures of acceleration.

The artful and aerodynamic F8 Tributo, Ferrari’s shape of things to come.  Photo: Courtesy of Ferrari.

Tributo, in Launch Control, can hit 60 mph in 2.9 seconds, 125 mph in 7.8 seconds and should come within an angel’s breath of 10 seconds flat in that favorite American measurable, the quarter mile. In Tributo, Ferrari’s twin-turbo 3902 cc V8 spools up 710 hp. That’s 182 hp per liter, the highest specific output ever for a road-going “mainstream” Ferrari V8. But Ferraris are not measured merely with numbers—a Ferrari will always offer a cohesive and visceral experience unlike any other car.

“The Ferrari Dynamic Enhancer [FDE] integrated into the car’s vehicle dynamic controls makes oversteer [tail-out] maneuvers easier to control on the limit,” says Leiters. “It was first introduced on the 488 Pista,” a road car produced last year that is narrowly focused for on-track capability, an extremist example of the 488 that pioneered technologies now part of Tributo. Adds Leiters, “For F8 Tributo, we reworked the FDE with a broader range of driver ability in mind. The FDE function is now available in the ‘Race’ setting of the manettino, allowing less expert drivers to control oversteer at slower vehicle speeds.” FDE will help less practiced drivers maintain control while dancing close to the edge of the performance envelope.

A pilot’s perspective behind the newly designed steering wheel.  Photo: Courtesy of Ferrari.

Ferrari cascades Formula One engineering, particularly aerodynamics, to its production cars. According to Leiters, “The S-duct was introduced on the 2008 F1 car. It’s a dynamic intake behind the front wing of the F1 cars, from under the nose to the upper surface of the chassis. It improves how the airflow generates downforce over the wing. Ferrari patented this solution when it was first employed on a road car: the 488 Pista. The F8 Tributo’s S-duct utilizes a channel from the bumper to the bonnet, where the calibrated section of the duct accelerates the air flow to increase downforce over the front thanks to the momentum change. In F8 Tributo, it contributes 15 percent to the overall increase of downforce of the F8 over the 488 GTB.”

Flavio Manzoni, director of Ferrari Design must balance the expected beauty of a Ferrari with the fact the body surface is in every way a highly technical aerodynamic tool. Because of the Scuderia’s efforts in Formula 1, few companies know as much about aerodynamics as Ferrari.

“The F8 Tributo is the latest technical and design evolution of the Ferrari mid-engined berlinetta and hails a significant transition in the run-up to the launch of a new generation of hybrid cars,” says Manzoni. “In that regard, the design is particularly relevant from a language perspective. Certain elements, in fact, reveal the presence of features optimized not merely for the increased efficiency and overall performance, but also to usher in a new formal evolution.”

“First and foremost,” says Manzoni, “there’s the new layout of the front of the car, spanning compact horizontal headlights, and ample air intakes and splitters which channel the air flows, sculpting the form of the bodywork. A design that simultaneously enhances functional demands and Ferrari styling elements, using a neat balance of concave and convex surfaces. There is also a sense of coherency with those styling elements and how they are reinterpreted along the flanks with taut lines and harmoniously balanced volumes, and the sinuous, muscular forms of the front and rear wheelarches.”

“Another notable element is the profile of the very tip of the front hood that almost appears as if it is floating, marking a separation between the upper and lower sections of the car, an impression further accentuated by the presence of the central S-Duct,” continues Manzoni. “The treatment of the rear is equally harmonious: the Lexan rear screen incorporates functional louvers which reference the F40 as well, conceptually citing the works of [spatial artist] Lucio Fontana. This rear screen, in fact, plays both a visual and a technological role that is reiterated by the lower engine bay air vents and the structure of the diffuser, which essentially define the overall architecture along with the twin circular rear lights, one of the classic Ferrari touches.”

Unveiling the Tributo at the Geneva International Motor Show.  Photo: Courtesy of Ferrari.

Enrico Galliera, chief commercial and marketing officer, is succinct: “The mid-rear-engined V8 berlinetta has played a pivotal role since 1975. The seminal 308 GTB marked a new genre in the automotive field and we have constantly evolved the model with an unparalleled level of technological innovation combined with constant carry-over from F1 and our GT racing cars.”

Like the 458 Italia and 488, the F8 Tributo is a dynamic and visual triumph—a measuring stick of the supercar universe for years to come.