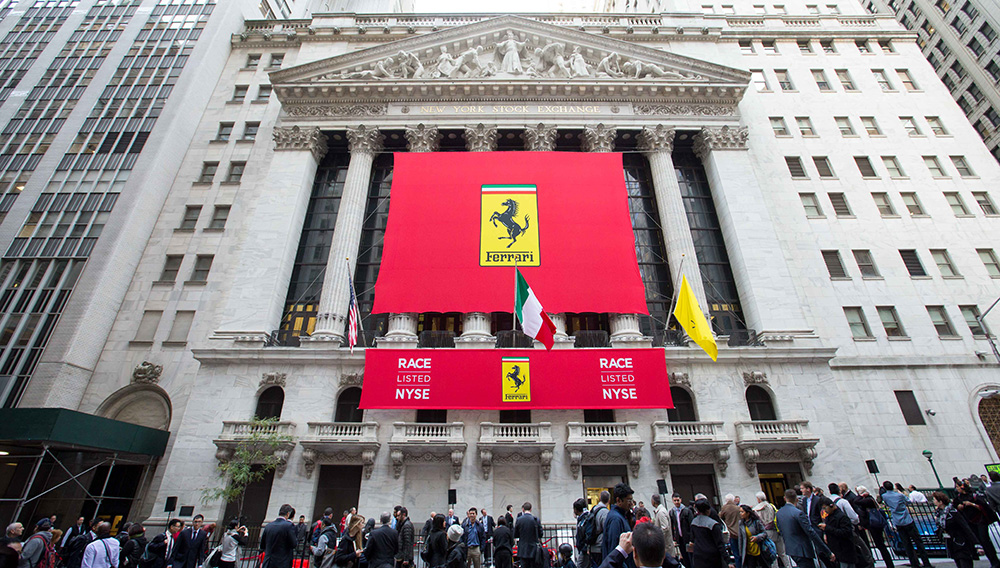 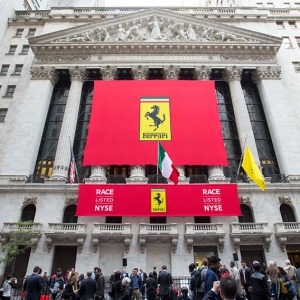 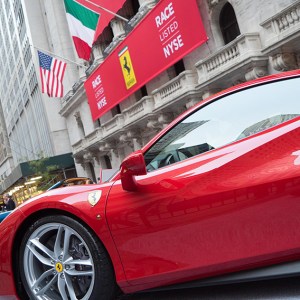 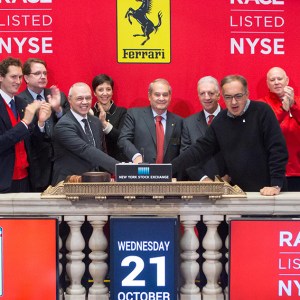 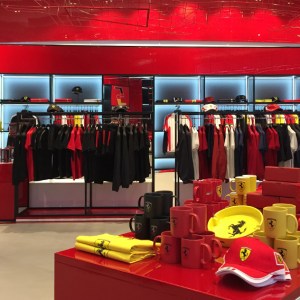 At 9:30 am EDT today, the Ferrari IPO began trading on the New York Stock Exchange for the first time—a move many in the industry find either welcoming or worrisome, as the iconic luxury marque moves out to the masses. Ferrari chairman Sergio Marchionne—accompanied by vice chairman Piero Ferrari (son of founder Enzo Ferrari), CEO Amedeo Felisa, and John Elkann, chairman of Ferrari’s parent company, Fiat Chrysler Automobiles (FCA)—rang the opening bell to begin the day’s business on the trading floor. At the end of the proceeding’s pomp and applause, one could not help but wonder if Enzo would have viewed the move as one that ultimately bolsters or bleeds the brand.

The Prancing Horse galloped out of the gate with an impressive start as the 17,175,000 shares (trading appropriately enough under the ticker symbol RACE) started the morning priced at $52 each, for an overall market offering of $893.1 million. The stock soon gunned it up to $61 before coasting at about 8 percent of the opening price, giving the company a market value of $10.6 billion, according to The Wall Street Journal.

The drive to today’s release began last year when FCA announced that about 9 percent of its majority ownership in Ferrari would be available to the public, while it retained 80 percent. The remaining percentage would stay with the Ferrari family. In January, Ferrari’s remaining stock will be distributed among FCA shareholders. The news came soon after former Ferrari chairman Luca di Montezemolo stepped down (after a poor showing from the Formula 1 team) and Marchionne took the wheel. The spin-off of Ferrari is part of FCA’s five-year plan, which calls for selling 7 million cars per year by 2018—almost a 63-percent increase. This ramped-up run includes a 2,000 car-per-year increase in Ferrari’s production, with the greatest expansion occurring in the output of the California T and the Ferrari FF.

It is this increase, coupled with product marketing that runs the gamut from kids’ car seats and cell-phone covers to playing cards and paperweights, that have many connoisseurs crying foul. For some, the IPO release is seen as the latest turn in a direction diametric to luxury. And it is an argument Marchionne quickly steers against.

In an interview this morning with Carl Quintanilla and Phil Lebeau of CNBC, Marchionne was asked about the threat to exclusivity and dilution of the brand. “Sixty percent of the people that buy our cars every year are returning customers, and, therefore, it would be almost suicidal to try and expand volumes to the detriment of that relationship,” replied Marchionne. “This company was founded on one simple principle. You only produce one car less than the demand for the vehicle. You just don’t exceed that equation. And so we need to grow the demand side before we supply it—it’s a very careful walk.”

The tightrope between perception and profit becomes more challenging with slowing economic growth globally, and, in the United States, a much stricter standard in the Corporate Average Fuel Economy (CAFE) by 2025. Perhaps these unknowns helped balance out the day, as the IPO closed at $55 per share—5.5 percent higher than it started.

“The Ferrari is a dream—people dream of owning this special vehicle, and for most people it will remain a dream apart from those lucky few,” the late Enzo once stated. But when it comes to the uncertain road ahead, another quote of his comes to mind: “What’s behind you doesn’t matter.” (ferrari.com)