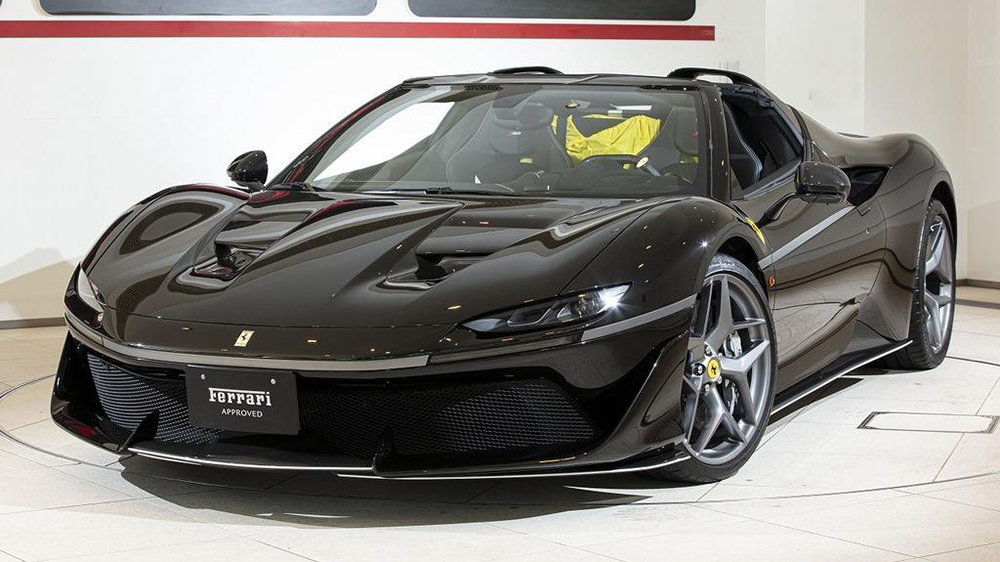 One of the rarest Ferraris of all time is up for grabs.

An example of the ultra-exclusive, one-of-10 Ferrari J50 was just listed for sale by an official dealer in Japan, according to Motor1.com. How rare is it to see a J50 hit the market? This is the first time it’s publicly happened since 2019.

The J50 was announced in 2018 to celebrate the Prancing Horse’s 50th anniversary in Japan (hence the name). The one-off release was designed by the automaker’s Special Project division and is based on the 488 Spyder. It’s differentiated from the base model by two key design details: a more angular body and a two-piece carbon-fiber targa top that can be stored behind its two seats.

Also distinct was the rear mid-engine speed machine’s engine. The J50’s twin-turbocharged V-8 features an extra 20 horses, pushing the total to a robust 490 horsepower. Mated to a seven-speed, dual-clutch automatic transmission that delivers power to the rear axle, the mill is capable of rocketing the vehicle from zero to 62 mph in three seconds flat and pushing it to a top speed of 203 mph.

This particular example is finished in Nero Daytona, or metallic black, with a matching black leather and Alcantara interior offset by carbon-fiber trim and white stitching, and it rides on a set of custom 20-inch rims. Having only rolled off the line four years ago, the limited-edition sports car remains very close to mint condition with just 430 miles on the odometer. What’s more, it’s not scheduled for its next official Ferrari maintenance until 2026.

As you may have guessed, you’ll have to spend and spend big if you want to get your hands on the J50. The car has been listed for ¥398 million (or about $3.6 million at current exchange). That’s no small figure, of course, but it’s also not much more than the $2.3 million to $3.4 million it original sold for.