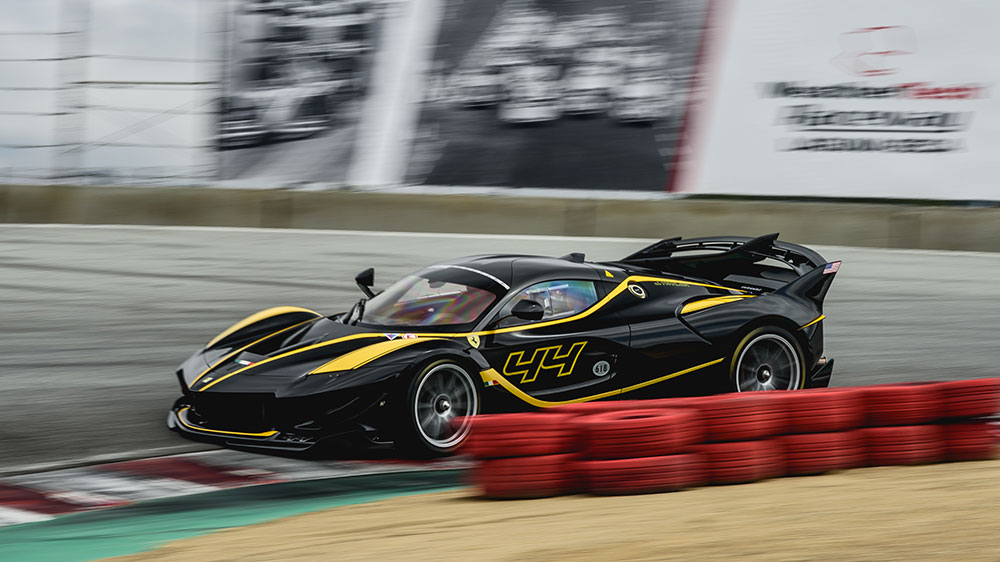 “Hiya.” John Taylor’s gentle Southern drawl is welcoming as the Dallas, Tex., native settles into a lounge chair above the pit lane at Laguna Seca. Below us, a cadre of Ferrari engineers and staffers scurry around, readying a host of Prancing Horse vehicles for Ferrari’s Challenge Series and Racing Days. Taylor, the CEO of a seniors healthcare and housing corporation, has owned a stable of Maranello’s finest, including a 599 GTO, a 458 Speciale Aperta, an F12tdf, an 812 Superfast and a LaFerrari Aperta, but we’re here to chat about his Ferrari LaFerrari FXX K Evo.

For the uninitiated, The Ferrari LaFerrari FXX K Evo is a $2.6 million, 1,036 hp V-12 hybrid that you can’t drive on the roads and you can’t race in any series. For the first few years of ownership, it remains with Ferrari. Only when you’re ready to drive it does Ferrari send it, along with a team of technicians and engineers, to the track to ready it for you. You must be asked to purchase it, and you must promise to actually drive it, instead of letting it sit around in hopes of flipping it as an investment. Only 40 such FXX K Evos exist, and each represents the apex in Ferrari’s racing technology. The only more impressive Ferrari you can buy would be a used F1 car.

Here, Taylor breaks down what it was like buying the FXX K Evo, what it’s like on track and what the community of FXX K owners is like.

What was your first Ferrari?

The first street Ferrari was a 360 Modena that I owned while I was waiting for a new 430 to be delivered back in 2004. Through exposure to the brand and my dealer, I knew that Ferrari North America had a client racing series, Ferrari Challenge and, over five years, I became interested in it. It took a while but, in 2010, I started the Challenge series.

Did you go through Corsa Pilota, Ferrari’s racing school?

I did, in Tremblant, in Canada. When I decided to do the Challenge Series, the program itself recommended I go to a racing school, so I did two segments of Jim Russell’s school out in Sonoma, Calif. I bought a 430 Challenge car, just to own as a track car, and not long after that the 458 Challenge car came out. I had a 458 street car and I knew how good it was and I knew that it had to be a better race car, so I committed to buying one of those to start the series with. I was offered a 599 XX, but I was so new at driving a race car, I didn’t think it was a good idea for me to go to that much car so quickly, I wanted to drive a race car for a few years first. I told my dealer, when the next XX car comes out, I’d like to be considered for it. When the LaFerrari came out, and I was offered to buy one of those, I instinctively knew that was going to be the next XX car, so I reminded my dealer I was interested. Ultimately, I was offered one. I also bought the LaFerrari Aperta.

What is the process like when you’re offered the FXX K Evo?

I came out and talked to the president of Ferrari North America about it. The program would like for people to buy those cars and actually drive them. They don’t want your FXX sitting around. They wanted to be sure I understood the commitment and that I was willing and ready to drive the car on the track. That was the main thing; a conversation about the program and ensuring you were going to be an active participant. I knew a lot about the FXX program because I had talked to a lot of other guys who were in the program.

How much research had you done on the car itself?

Not much. They debuted the car in Abu Dhabi at the finale of the F1 season, and I saw—and heard—it and knew I wanted it. My first thought was, “What a car! I have to have that.” That’s about all the research I did. I took delivery four years ago in August. The process moved fairly quickly once I was in the queue. I had to sign all the documents and pick the livery before they could build it. Three or four months later, the car was delivered.

What were some of the livery options?

They’re unlimited. I have the good fortune of being good friends with Flavio Manzoni, the head of Ferrari design. I asked Flavio if he would help me, so he sent me three or four different choices, knowing a little bit about what I liked in cars, and I picked one from that. He sent it to Corse Clienti to execute. Corse Clienti will do this whole process on their own, but I wanted Flavio’s help.

Where did you first see your car in person?

At [Ferrari’s private test track in] Fiorano. There were three FXX K cars delivered and we all did our shakedowns together. You ride first with a professional driver, and it was an ‘oh my’ moment. It was surreal to be on that Fiorano track, since I never thought I’d be driving there. When I got in the driver’s seat, it was amazing.

Did you immediately try to push it?

I’m more of a build-up kind of guy. I’ve been driving a race car for the past five years, so it wasn’t that I couldn’t drive it fast, but I wasn’t trying to set a lap record at Fiorano. I did get it hauling by the end of the day. I wasn’t nervous, but I was excited.

How many tracks have you driven the FXX K on since then?

I don’t know. I’m one of the drivers who has the most kilometers on the car, 7,500 km [4,660 miles] already. Every track you drive, you get a sticker on the windshield, so I have a complete row and a half. Though all are fun, the track best suited for the Evo is Spa-Francorchamps in Belgium. The car runs well here at Laguna Seca, too. I tested here for Challenge so I know the track pretty well and I’ve been impressed how the car runs here. I think it’s well suited to any road course. I’ve also been to Vallelunga in Italy, Hockenheim in Germany, Silverstone in England and we’re going to Nordschleife in July. That’ll be my first time on that bucket-list track.

How do you top driving an FXX K at Nordschleife?

I don’t know if you can. My hope is to do the Red Bull Ring in Austria or Suzuka in Japan, and maybe Abu Dhabi.

What surprised you most about the Evo when driving it for the first time?

It’s the first hybrid car I’ve ever driven, and the torque out of a slow corner was incredible. The electric power gets you out of a corner very strong. We have the capability of manipulating the KERS, and an added feature in the Evo is a push-to-pass button, which gives you not the maximum power—that’s Qualifying mode—but it gives you a really good boost. It’s been an amazing experience to drive a hybrid car and feel that nice electrical accompaniment to the V-12

The KERS (kinetic energy recovery system) helps recover energy under braking. Can you explain the system a little and how you use it?

There’s a Fast Charge mode, which we use to bring it in after using Manual mode or Qualifying mode, because it takes the battery power down fast. Qualifying mode gives you maximum power from the electrical system. It has a Long Run mode, which is what I drive it in most of the time. Now that we have the ability to activate Manual mode with our thumb, I use that a lot. Using the KERS with the buttons allows you to regenerate the battery power without having to put it back into fast charge. It disengages when you put on the brake and you have to reengage it after a turn. I’m using it where you have enough straight line distance to benefit from it. It’s just less hassle to recharge the battery this way. They sought a lot of driver input into the Evo and the most common thing they heard was the manettino for the KERS was on the console before and could they put it on the steering wheel, where it’s less distracting to change it.

There’s no wheel-to-wheel action with the FXX Ks, just open track time. Do you miss racing?

I do, but at my stage in life, after six years, this suits me better. At 72, I’m not sure I will get back into competitive racing. I do still get a thrill when I hit the push-to-pass and fly by someone. I’ve used it a few times coming out of turn 11 here, and a slower car in front of me was to the floor, and I still got around him.

Without race results, how do you judge what’s a good day for you?

Driving consistently, and if I keep the car on the track. I want to be conscious of the other drivers, including some who are faster than me, and I need to be able to let those folks by when they need to. I want to have a good time but without hindering anyone else.

You mentioned consistency. Are you drilled into your telemetry?

I don’t look at it every time I go out but I do look at the telemetry. It’s such a great program and at the end of every track session, we get a USB drive with all our onboard footage and all our telemetry that you can dive into at home. They send us email reports with that data, and the status of the car and the life of the gearbox and how much time until they have to do a tune up or an engine overhaul. I watch all the video of myself, looking for mistakes. I always ride with one of the Corse Clienti driving coaches. Riding with those guys, you realize you’ll never drive like they do, but you certainly know what the car can do.

Those guys are champion drivers, across a host of series. What do you learn from them?

You watch their gears and their brake zones and they talk me through the track on headsets. It’s extremely helpful.

How tight-knit are the FXX K owners?

Quite. We all enjoy each other’s company and that’s kind of like the Challenge Series. You build a real camaraderie with the other drivers. There are some that are less interactive than others, but most of them are friendly and fun to be around. I keep in touch with a few when we’re not on the track.

I assume you have the means to have any car you desire. What made you pick the Evo over, say, an F1 car?

I’ve been enticed to think about an F1 car. I drove the GT3 yesterday and I’m 6’1” and I had to contort myself to get in there. I think the FXX K is the perfect car for me and my stage in life. It’s easy to enter and exit and it’s such a pleasant car that’s driver friendly. If you’ve driven race cars, then this becomes an easy car to drive.