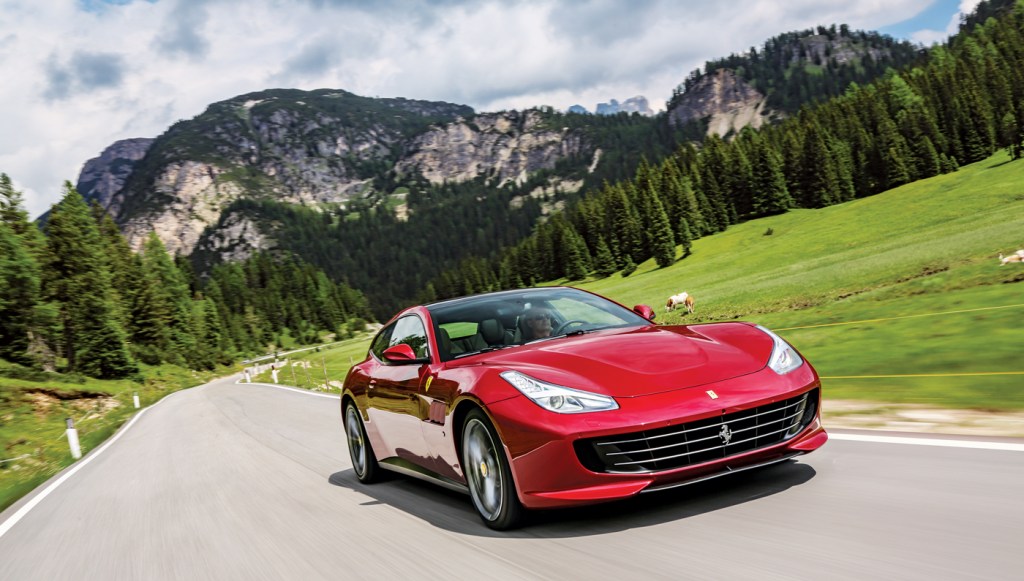 Like the FF that preceded it, the Ferrari GTC4Lusso is a stunning and powerful GT with plenty of room for four occupants, plus their ski and overnight bags.

On a steep slope overlooking the narrow Campilltal valley in Italy’s South Tyrol province, an old farmer in a white hat and an indigo apron scythed hay by hand. Perched on the mountainside above him was a 13th-century castle that was once home to prince-bishops and now houses a museum of Ladin history and culture. In this and other obscure valleys of the Dolomite Mountains, some 30,000 souls still perpetuate the Ladin language, an ancient tongue that derives from the colloquial Latin spoken here ages ago.

Seeing the farmer silhouetted against the valley’s checkerboard of dark and pale green, I pulled over to watch him work and recalled something a local Bürgermeister had said the previous evening at a reception at the Kronplatz ski lodge. Over nettle dumplings served on a wild-herb salad and alongside a glass of ruby-red wine from the Schiava grape, he described how living a simple life close to nature contributes to the longevity of the people in the Dolomites. He spoke specifically of the small-farm owners. The incongruity of watching this one tend his field in a timeless fashion while I was seated in a swoopy, futuristic-looking gray Ferrari GTC4Lusso was not lost on me.

The new coupe succeeds the FF model, which was the first Ferrari equipped with all-wheel drive, and it extends the marque’s tradition of exceptional GTs, including the ones that its name references: the elegant 250 GT Berlinetta Lusso and 330 GTC of the mid-1960s. (Lusso is the Italian word for “luxury.”)

A motorcycle pulled over ahead of the Ferrari, and after getting off his bike, the leather-clad rider removed his helmet and introduced himself as the owner of an auto-repair shop in Germany. He had already spotted a white GTC4Lusso in the area—another car from the deployment of press-preview Ferraris—and was curious about the new model. Hearing some of the specifications provoked an “aaww!,” a “whaa?,” and a “wow!”

Revised with new cylinder heads and other improvements, the GTC4Lusso’s free-breathing 6.2-liter V-12 generates 690 hp. That power enables the car to accelerate from zero to 124 mph in 10.5 seconds—0.2 second faster than the FF. The GTC4Lusso retains the FF’s forward-mounted power-takeoff unit, a small electronically controlled gearbox that distributes torque to the front wheels when all-wheel drive is required. (The 7-speed dual-clutch automatic transmission and electronic differential sit at the rear.) A new four-wheel steering system angles the rear wheels for less understeer, and thanks to an automatic valve, the exhaust note goes from languid countertenor to screaming beast with just a nudge of the gas pedal. The GTC4Lusso will become available for purchase by the end of the year, at an expected price of about $300,000.

Like the GTC4Lusso, South Tyrol has more than one voice. Less than 15 miles from the farmer’s field is Bruneck, also called Brunico, the main town of Puster Valley. Founded by Prince-Bishop Bruno von Kirchberg in the 13th century, Bruneck counts 82 percent of its households as German-speaking. At the bar at the Majestic, the hotel in Bruneck that hosted the media members in town to test-drive the Ferrari, Maxlrainer beer from Bavaria was on tap, but Prosecco and Fernet-Branca were also served. A sign outside a nearby church indicated that Sunday mass was said in German at 7 am and in Italian at 9 am.

The GTC4Lusso demonstrated its merits on a drive from Bruneck into the heart of the Dolomites, along Strada Statale 242, to Val Gardena, the ski resort that has hosted World Cup ski races almost every year since 1969. The car’s new face, with a sportier trapezoidal grille and bold horizontal headlamp frames, pointed the way through the narrowing canyon until the road wriggled over Sella Pass at 7,362 feet above sea level. The taut lines, subtle rear spoiler, and graceful downward extension in the rear of the GTC4Lusso make it one of the smartest-looking cars on road.

The new car offers backseat passengers a tad more legroom than the FF. You have to be limber to enter the rear of the cabin, but once you settle in, you’ll remain comfortable all day. A new dual-cockpit configuration benefits the front passenger. The design includes an optional display of media, navigation, and performance information on a slender screen above the glove box. “We try to give the passenger the same dignity as the driver,” said Ferrari’s GT product manager, Pietro Virgolin. “People who buy this car like to share it.”

For the driver, Ferrari has redesigned the steering wheel so that the telephone controls are on the front and the indicator switches are longer than they were on the FF. “It’s more compact and ergonomic,” said Virgolin. Beyond the steering wheel is a central tachometer with a brilliant face that evokes a sport chronograph. Dual 5.4-inch thin-film transistor displays—one on each side of the tachometer—present selectable information about pressure, range, and pace: The left monitor shows fuel range, battery range, tire pressure, and oil pressure; the right shows the speedometer. The center dashboard features a 10.2-inch, full-HD multifunction touchscreen that displays drop-down menus and large indicators and has the pinch-zoom functionality of a smartphone.

In addition to these features, sumptuousness and beauty, and power and performance, the GTC4Lusso offers practicality. Under the liftgate is nearly 16 cubic feet of cargo space. A large pass-through in the rear seat backs accepts skis, or you can fold them down in an instant to increase the cargo space to more than 28 cubic feet.

Ferrari considered Bruneck and the Dolomites as the perfect setting to showcase the GTC4Lusso’s style, handling, and traction. The area’s ski resorts could be likely destinations for the car’s owners, who Ferrari expects will be similar to FF owners and different from owners of other models in the brand’s lineup. “We like to call them adventurers,” said Virgolin. The company says FF owners are, on average, 10 years younger than owners of other Ferraris. They drive more miles, and more often than not have four people in the car. The GTC4Lusso’s all-wheel drive makes a ski vacation in the mountains even more plausible.

The car may have seemed out of place next to the farmer scything hay, but it still could be a good fit with the Dolomites.