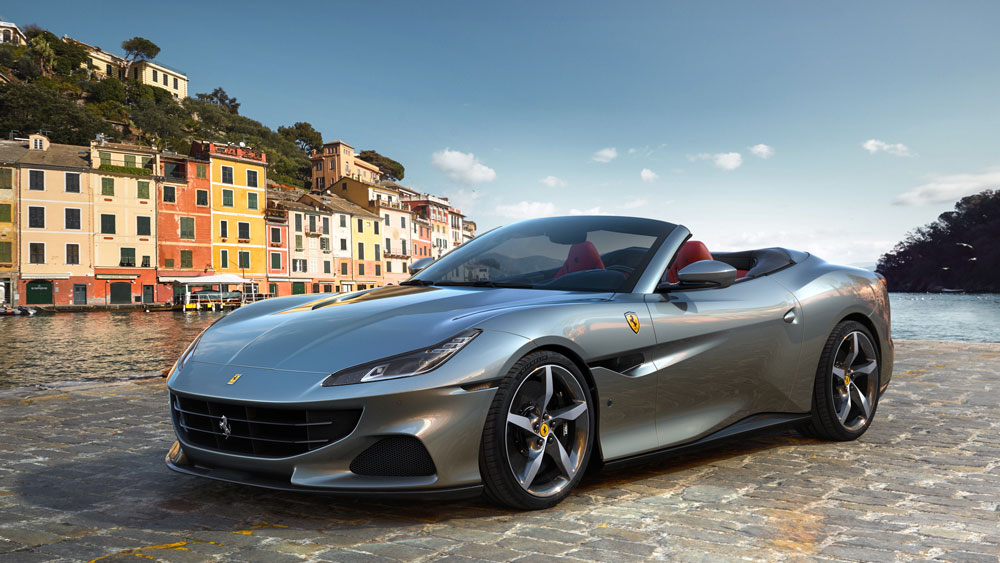 Ferrari’s original Portofino, introduced in 2017 as the successor to the California T, quickly established itself as one of the world’s best GT convertibles. Not just a revamped Cali T, the Portofino broke new ground with its performance and looks. Notably, its retractable hard top offered coupe-like styling when raised, plus convertible pleasures—amplified by the sound of Maranello’s snarling twin-turbocharged V-8 engine—when lowered. And for the first time in automotive history, a folding hard top—which opens and closes in 15 seconds—had a flowing fastback profile as beautiful as the spider’s sleek drop-top design.

In Ferrari fashion, however, it was time to make a great car better. The Portofino M is the latest version of the marque’s 2+ GT spider, and it was unveiled yesterday in Ferrari’s first-ever live online reveal for a car. Named after the seaside village on the Italian Riviera, the new Portofino appends an M, which means Modificata, a suffix familiar to followers of models from the Prancing Horse. That M is all about evolution, most apparent in the car’s boosted power and performance, and also in its exterior and interior design.

The power plant features new cam profiles that increase valve lift and optimize combustion, and “zero turbo lag” is how Ferrari characterizes its V-8’s seamless application of power. Turbo impellor speeds have increased by 5,000 rpm, while emissions across the board are lower in order to be in compliance with stricter Euro clean-air standards. Torque, at about 561 ft lbs, remains the same as before, and is available from 3,000 rpm to 5,750 rpm. The Portofino M’s engine—spinning a flat-plane crankshaft—has an addictive sound, made more so with a new exhaust system that eliminates the rear-most silencers to reduce back pressure and make the Ferrari’s voice even more intoxicating.

Especially notable is the new eight-speed dual-clutch transmission, which replaces the seven-speed dual-clutch unit in the outgoing Portofino. According to chief technology officer Michael Leiters, the rear-mounted transmission, a close relative of that used in the SF90 supercar, will be featured in future Ferrari models. Shorter gear ratios in lower gears take advantage of the extra power, while longer ratios in higher gears reduce emissions and improve fuel economy. The new gearbox is 20 percent smaller but produces 35 percent greater shifting torque, which is purported to make driving the Portofino M even easier in stop-and-go traffic during rush hour.

The redesigned exhaust allows for a more streamlined rear bumper, with a separate rear diffusor below.  Photo: Courtesy of Ferrari N.V.

The Portofino M is essentially two cars in one. Ferrari’s chief design officer, Flavio Manzoni, calls it “a beautiful combination of sportiness and elegance at the same time.” Its exterior design has been refined, though at a glance there is no question it’s still a Portofino. The redesigned exhaust let designers create a lighter appearing, more streamlined rear bumper, with a separate rear diffusor below, now optionally available in carbon fiber. Up front, a conspicuous new air vent at each front wheel arch reduces drag, while a redesigned front bumper accentuates the car’s profile and incorporates capacious air intakes. In addition, a new grille distinguishes itself with aluminum slats and the wheels feature a diamond-finished aesthetic, also new for the M.

Handling dynamics and safety are enhanced by Ferrari’s state-of-the-art SSC (Side Slip Control), which coordinates vehicle dynamics and integrates all vehicle control systems. And then there’s FDE, a lateral dynamics control system that adjusts brake pressure and engages only in Race mode, which, with the Portofino M, is available for the first time in one of Ferrari’s grand touring spiders. The other modes, accessed by the five-position Manettino (the little red-anodized aluminum switch on the steering wheel), comprise Wet, Comfort, Sport, and ESC off. The latter deactivates the electronic stability controls.

The dashboard is complemented by a central console featuring a 10.25-inch touchscreen.  Photo: Courtesy of Ferrari N.V.

Top up or down, the chief attraction of the interior is its ability to accommodate two people in the rear seats. Ferrari calls the Portofino M a 2+, and the plus suggests those are most often children. Still, the fact that the Portofino M might be called a “family car” broadens its market appeal. Back passengers will appreciate the lightweight magnesium-framed front seats with a compact rear seatback profile that increases rear legroom. The engaging multi-level dashboard is complemented by a central console featuring a 10.25-inch touchscreen, while the front passenger gets a 7-inch touchscreen for access to infotainment and navigation.

As with all Ferrari models, an impressive list of options is available to clients who wish to make their Portofino M even more special. It will cost from € 206,000 when it comes to the European market in the second quarter of 2021. Pricing for the model in North America, where it will arrive later, has yet to be announced.