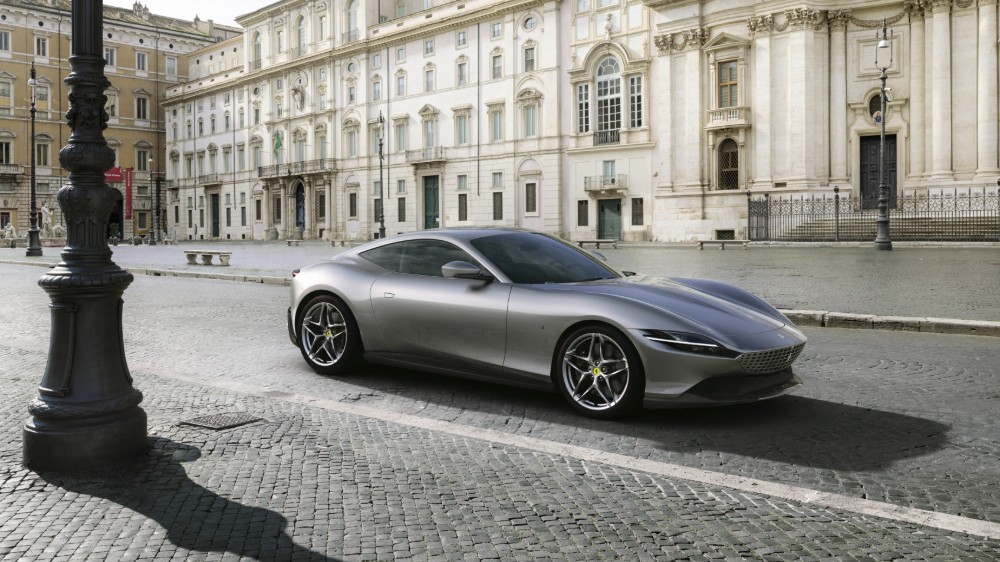 The debut of a new car model is an occasion, but when that debut is of a new Ferrari, the anticipation, ceremony and drama are upped considerably. That’s the case in Rome as we’ve just seen the new Ferrari Roma. And the latest from Maranello arrives as a truly stunning grand tourer.

Meant to evoke “La Nuova Dolce Vita,” the car is an ode to life in the Eternal City of the 1950s and 1960s. Like the Ferrari Portofino, Maranello, and Modena, Roma takes its name from a specific place in Italy, this time its most famous city and capital. And while that carefree vibe and lifestyle were an inspiration, so too were a few of the Ferrari GTs of the period. Design director Flavio Manzoni says the 250 GT Berlinetta Lusso, and 250 GT 2+2 embodied this the most. We can sense those cars in the sculpted hood, the new perforated grille, and the overall profile silhouette.

“We wanted this to be a pure, monolithic form. It was important to be able to draw the car with just one line,” says Manzoni. The exterior exudes modernity, is sleek and defined by clean lines. The grand front end, with its Aston Martin–like pinched shark nose, adaptive full-LED headlights (with a horizontal LED character strip) and the new grille concept make it the most modern looking Ferrari we’ve seen yet.

The rear evokes muscle with haunches wrapped over 20-inch wheels. The taillights are thin, sharp bars and create an especially strong graphic. Two sets of dual exhaust pipes, set to the outer corners, hint at the Roma’s performance capability.

Ferrari’s latest GT covers zero to 60 mph in 3.3 seconds and can reach a top speed of 199 mph.  Photo: Courtesy of Ferrari.

The mid-front-engine proportions are backed up by Ferrari’s award-winning turbo V-8, good for 611 hp at 7,500 rpm, and 561 ft lbs of torque. Power is distributed via an eight-speed DCT, the same one that recently debuted on the SF90 Stradale, meaning it should also be about 13 pounds lighter than the one it replaces. Roma can hit 60 mph in about 3.3 seconds, and boasts a top speed of 199 mph.

Ferrari says these figures are good for best-in-class performance. Helping it achieve that performance is a suite of tools. For one, the rear windscreen has a built-in mobile spoiler that is flush within the rear of the car. It automatically deploys under hard driving to aid with downforce. Roma also boasts cutting-edge dynamic systems like its Side Slip Control 6.0, with five driving modes, the Mannetino and Ferrari Dynamic Enhancer, which hydraulically adjusts brake pressure at the calipers, a first on a Ferrari GT model.

According to the marque, great effort was made to reduce weight wherever possible, and it’s resulted in a best-in-class power-to-weight ratio.

To meet emissions standards, Roma required Gasoline Particulate Filters, so engineers in Maranello paid extra attention to the sound of the exhaust system by removing silencers and introducing new bypass valves to enhance the soundtrack.

The interior reflects an evolution of the dual-cockpit that first appeared on the GTC4 Lusso, creating a feeling of individual driver and passenger cells. The HMI has been fully reworked, the steering wheel is new, and all of the Roma’s main commands can be accessed via haptic controls on the wheel, which allows drivers to focus on the road.

A 16-inch digital cluster provides all necessary information, and the 8.4-inch vertical touchscreen—as well as a passenger screen—were developed to be intuitive. A Ferrari key with “comfort access” allows the driver to open the car with just the touch of a button next to the new flush handle on the door. While pricing for the US will be announced closer to delivery, Ferrari says the Roma will start around 200,000 euros ($220,500 USD) in the European market.