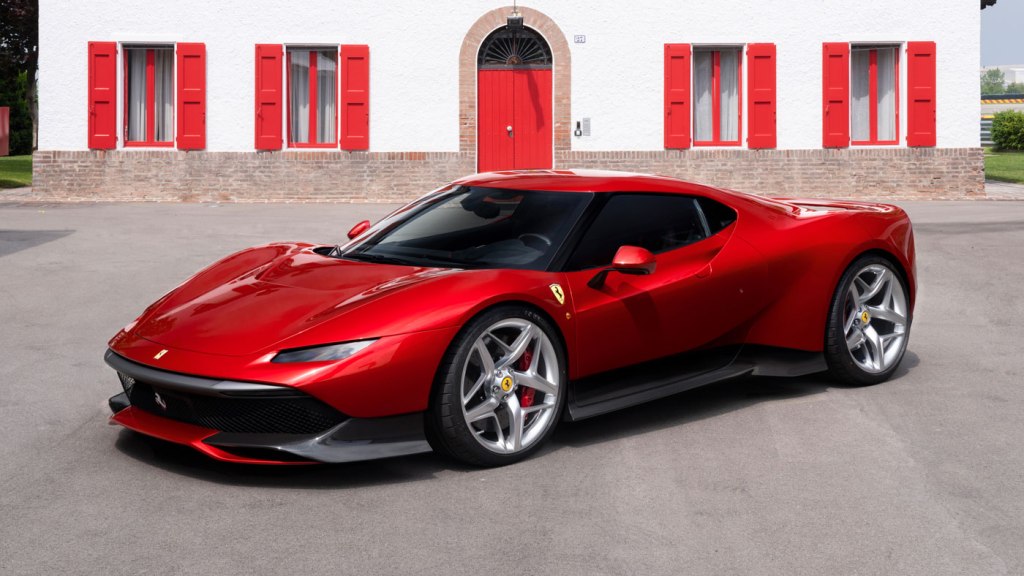 Ferrari has unveiled the newest bella macchina from its exclusive One-Off customer program—a re-sculpted, highly bespoke version of the production 488 GTB that Maranello is calling SP38.

This metallic red masterpiece has been specially created for what Ferrari describes as one of its most dedicated customers—rumored to be young Swiss Ferrari dealer and passionate Ferrari race team owner, Ronnie Kessel.

While the car is based on a 488 GTB, the entire bodyshell has been reimagined by the Ferrari Design Centre and references design elements from the legendary F40, the car that celebrated Ferrari’s 40th anniversary.

Arguably the new SP38’s most defining feature is its beautifully formed tri-louver rear decklid that replaces the 488’s glass panel. That and the F40-inspired rear wing which rises out of the bold rear fenders.

Equally dramatic are the changes made to the slant-nose front end. New, slimline headlights replace the 488’s elongated lights, while a slender blacked-out bumper lip gives a nod to the old 308 GTB seen on the show Magnum P.I. The carbon diffuser beneath it is nothing less than automotive art.

Gaze at the car in profile and you’ll see that the 488’s distinctive rear fender-top air intakes have been replaced with openings at the base of the side windows. It gives a smoother, more elegant look to the car’s rear quarters.

Under the new skin, the SP38 carries over the 488’s potent 662 hp, 3.9-liter twin-turbo V-8 and seven-speed F1 dual-clutch transmission. Performance figures have not been revealed, but the 488 GTB’s zero-to-62 mph time of 3 seconds and top speed of 205 mph will likely be unchanged.

The SP38 joins a small, highly exclusive line of bespoke cars from Ferrari’s One-Off program. Among the first was the gold-painted P540 Superfast Aperta, built in 2010 for Broadway producer Edward Walson. Arguably the most famous was the SP12 EC created for guitarist Eric Clapton in 2012.

Before the SP38 gets delivered to its new owner, it debuts to the public at this weekend’s Concorso d’Eleganza Villa d’Este on the banks of Italy’s Lake Como.