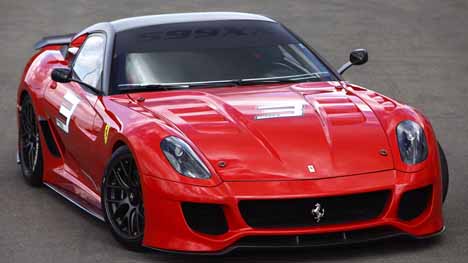 In a move that recalls its Enzo-derived FXX racer, Ferrarinow turns up the heat on the 599 GTB Fiorano, creating the dazzling new 599XX. Ferrari made available a mere 30 examples of the FXX to select customers during 2005 and 2006 (priced at $1.8 million), and the company retained the right to manage the cars’ track use after purchase. The new 599XX won’t command a sum quite as stratospheric as the FXX (only about $1.4 million), but the car will be at least as rare—and as tightly reined.

The company plans to make available a mere 20 to 30 examples of the 599XX to a select few on its closely guarded client roster (a list that includes Canadian businessman Lawrence Stroll, who owns Quebec’s sensational Circuit Mont-Tremblant). Like the FXX, the 599XX is a rolling test bed of cutting-edge go-fast technology—a fair amount of it destined for the Ferrari’s road cars. It packs a reworked version of the Fiorano’s glorious 6-liter V-12, producing a nice round 700 horsepower (up from 612) at a screaming 9000 rpm. Revisions to the SuperFast six-speed automated manual transmission cut shift times to a scant 60 milliseconds (down from a slightly less scant 100 milliseconds). Outside, modifications to the Fiorano’s artful Pininfarina-penned shape are surprisingly low-key but suitably sinister. Carefully integrated aerodynamic modifications—including a rear diffuser and downturned winglets on the roof’s buttresses—increase high-speed stability and help produce 618 pounds of downforce at 200 kilometers per hour (125 mph) and a whopping 1,389 pounds at 300 kilometers per hour (186 mph). And because stopping is at least as important as going fast, Maranello’s engineers have worked with brake manufacturer Brembo to create a racing version of Ferrari’s carbon ceramic braking system, which weighs substantially less and shortens stopping distances. And as it did with the FXX, Ferrari will attach to the 599XX’s purchase a commitment to participate in the Corse Clienti race program, which governs track usage and requires owners to report back to Maranello on the car’s performance. If you’re on the secret client list, you know it already; if you’re not, well, daydreams are free. (www.ferrari.com)