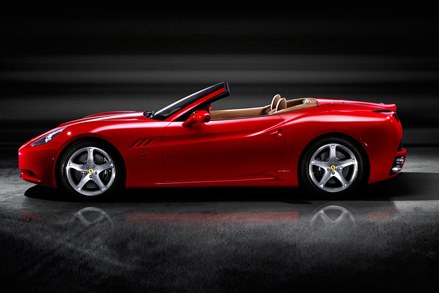 It is not every day that Ferrari pulls the wraps off an all-new model, particularly one that evokes one of the brand’s most hallowed names. Ahead of October’s Paris Motor Show, the artisans in Maranello, Italy, have revealed the sensational new Ferrari California grand tourer. Inspired by the 250 GT California Spyder from 1957 and intended to slot below the F430 as the Ferrari range’s value leader, the California nonetheless distinguishes itself with an appropriately seductive profile and stellar performance, along with a surprising degree of utility.

Motivation comes courtesy of a front/mid-mounted 4.3-liter V-8 with direct fuel injection producing 454 horsepower at a howling 7,500 rpm. The engine is matched to a brand-new dual-clutch automated manual gearbox. Similar to Porsche’s new PDK transmission, Ferrari’s twin-clutch seven-speed promises lightning-quick gear changes with no hiccup in the flow of torque during full-throttle acceleration. The company claims the California will bolt to 60 mph in less than four seconds. The aluminum-bodied model features a retractable hardtop that opens or closes in just 14 seconds and an unexpectedly capacious trunk (a set of custom-fitted Schedoni luggage is an option). Ferrari is calling the car’s cabin a “2+” concept, but two plus what remains to be seen. Company insiders suggest buyers will be able to specify either a parcel shelf behind the front seats or a pair of vestigial rear buckets with three-point seat belts.

Ferrari hasn’t yet revealed an on-sale date or pricing for the 2009 California, but expect the Golden State’s dazzling new namesake to slip in just below the $200,000 mark when it rolls into American showrooms next year. (www.ferraricalifornia.com.)