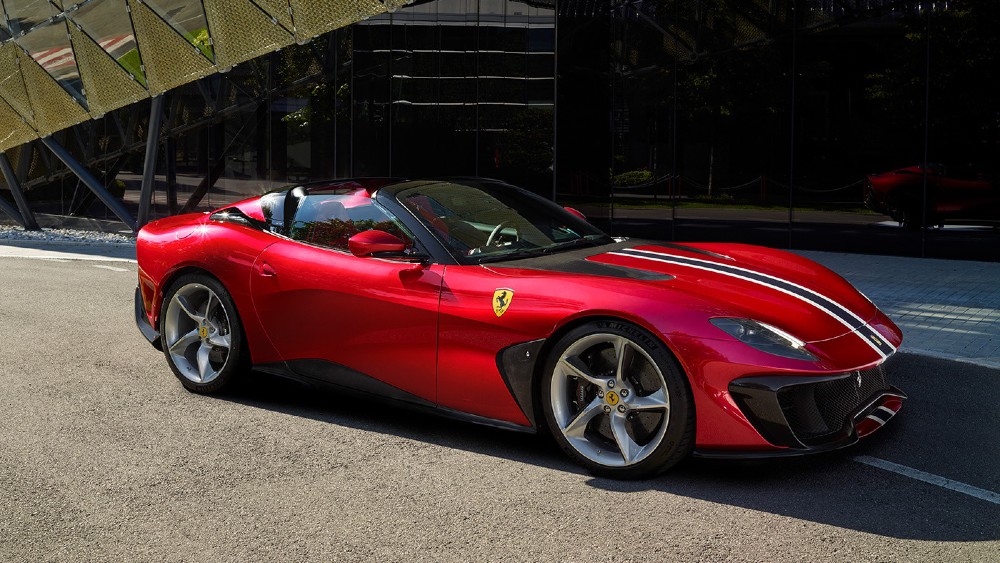 If you’re splurging on a one-off Ferrari, you might as well go all out.

That’s exactly what the owner of the new SP51 appears to have done. The open-top speed machine is built on the bones of the powerful 812 GTS and features a beautiful body inspired by the marque’s classic race cars.

Like the Special Projects team’s previous one-offs, the SP51 was built to the exact specifications of its anonymous owner. The collector reportedly wanted a thoroughly modern supercar with a look that pays homage to the Prancing Horse’s mid-century track dominance. Specifically, the 1955 410 S race car that was once driven by the legendary Juan Manuel Fangio. The custom four-wheeler is finished in Rosso Pasionale—the red hue was developed exclusively for the vehicle, of course—and features a blue-and-white racing stripe down the center.

The racing-inspired livery isn’t the only design element that differentiates the SP51 from the 812 GTS. It also has a reworked front fascia, with a more aggressive grille and front splitter. The biggest change, however, is the roof. The 812 GTS has a retractable hardtop, but the SP51 has done away with it completely. It’s likely because of this modification—which one can only imagine has affected the vehicle’s aerodynamics performance—that a carbon-fiber spoiler now sits between the flying buttresses, just behind the two seats.

One of the more unique details of the SP51 is that the racing stripe carries over to the interior. The bulk of the cabin—which, like the body, was designed with heavy input from the owner—is covered in red Alcantara that is broken up by blue and white accents. The center console also features a plaque denoting the vehicle’s one-off status.

It’s unclear if any mechanical changes were made to the car. It would be rather hard to improve upon a vehicle like the 812 GTS, though. The standard version of the sports car is powered by a front-mounted, 6.5-liter naturally aspirated V-12 that produces up to 789 hp and 530 ft lbs of torque. All that grunt makes it the most powerful convertible currently available. In fact, it has a sub-three-second zero-to-60 mph time and a blistering top speed of 211 mph.

The identity of the SP51’s owner isn’t the only thing Ferrari is keeping quiet about. The marque also won’t say how much the unique build cost, but it likely eclipsed the 812 GTS’s nearly $400,000 starting price. Quite the splurge.