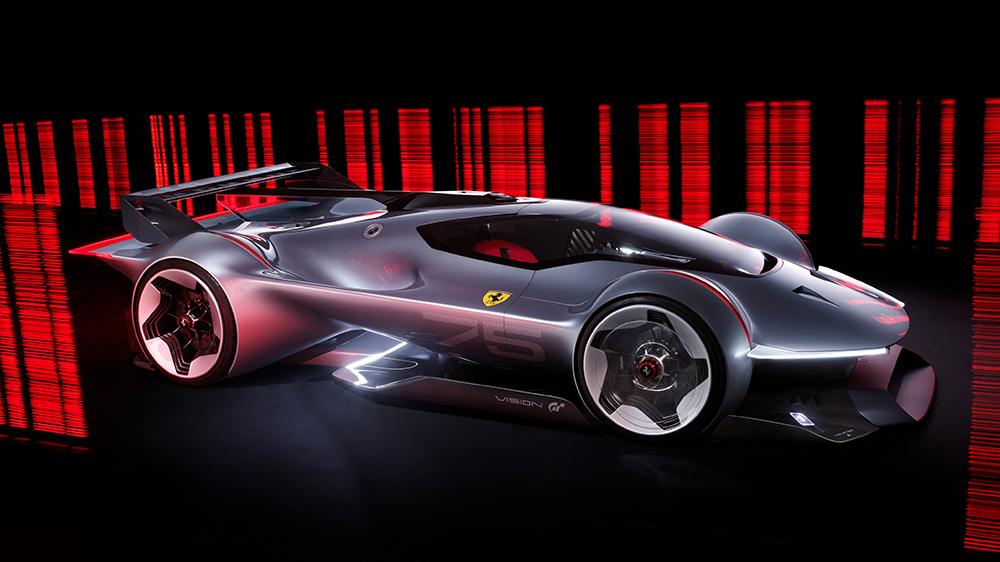 The Prancing Horse is ready to conquer the digital world.

Ferrari has just unveiled a race car concept that will make its debut in the latest Gran Turismo video game before the end of the year. The eye-catching speed machine is the first original vehicle the Italian marque has contributed to the racing franchise’s Vision Gran Turismo program, which dates back to 2013.

The automaker’s futuristic racer is called the Ferrari Vision Gran Turismo. Like Lamborghini and Porsche before it, the Maranello-based brand used its virtual car as an opportunity to really let loose, creating the most stylish and high-performance vehicle it could dream up. The result is a single-seater that makes the brand’s upcoming Le Mans racer, the 499P, look relatively restrained in comparison.

Ferrari’s latest concept looks as much like a rocket ship as it does a race car. It has a layout similar to that of the company’s open-wheel Formula 1 car, except that everything is enclosed by its curvaceous body, including its center-positioned cockpit. The shape of the racer may look a bit out there, but it’s specifically been designed to be as aerodynamic as possible, which explains the presence of a spoiler and giant wing in the rear. Completing the package is a razor-thin light package and “75” badges to celebrate the 75th anniversary of the marque’s first race car, the 125 S.

The Vision Gran Turismo features the same twin-turbo 3.0-liter V-6 found in the 499P, but here it’s assisted by three electric motors—two on the front axle and one on the rear, giving the vehicle all-wheel drive. The setup is linked to the same eight-speed, dual-clutch gearbox found in the company’s F1 car and is capable of pumping out a combined 1,337 horses (1,015 hp is produced by the internal combustion engine and 322 hp by the trio of electric motors). Ferrari says the car can zoom from zero-to-62 mph in under two seconds and has a top speed of 217 mph.

The best part of the Vision Gran Turismo program is that we actually get a chance to try the wild concepts out for ourselves. Ferrari’s racer will be available to drive in Gran Turismo 7 starting Friday, Dec. 23 (the winner of the game’s upcoming campaign quiz will get access a week early). The car won’t just exist in the virtual world, though. The automaker is also building a full-scale physical model that will be on display at its museum.

And who knows, maybe one day the latest Vision Gran Turismo will go into production. It’s happened before.