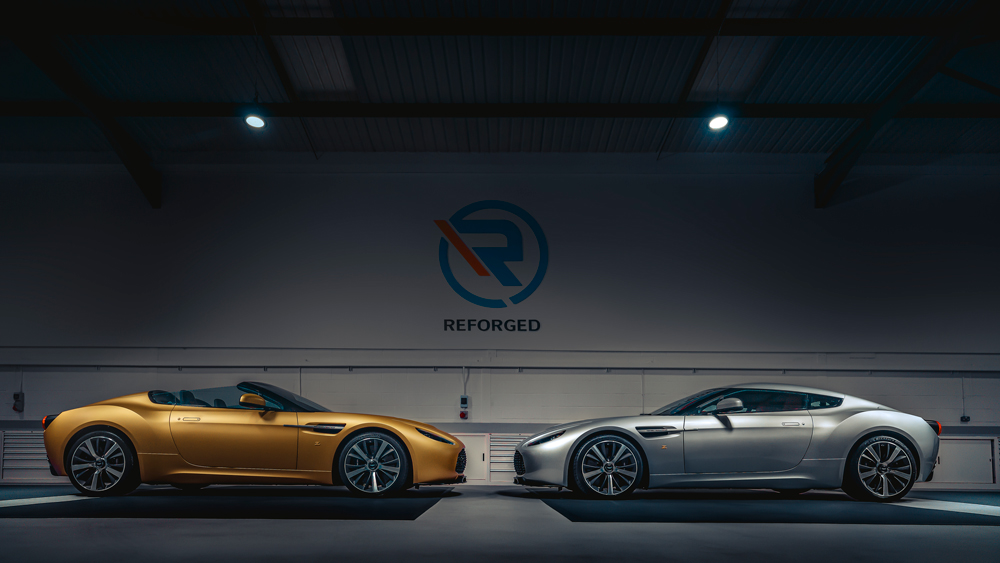 Following R-Reforged’s announcement of its ambitious project in June 2020, the first of 19 pairs of spectacular Aston Martin Vantage V12 Zagato Heritage Twins have been unveiled. The initial Coupé and Speedster—both prototypes developed for Zagato’s CEO Andrea Zagato and his wife Marella—were made by R-Reforged, the manufacturer of small-series vehicles based in Warwick, UK. Built to celebrate the centenary of Zagato, Italy’s oldest surviving coachbuilder, the Twins are a contemporary take on the original 2011 Aston Martin Vantage V12 Zagato Coupé styled by the Milanese coachbuilder.

The Twins feature sleek bodies fabricated in carbon fiber, and incorporate numerous technical and aesthetic enhancements that improve on the already stunning performance and looks of the 2011 version, largely through the use of active aerodynamics. The all-new Speedster that completes the pairing explores a topless version of the Coupé and was not originally available in 2011.

Zagato and Aston Martin go way back, and no Aston Martin is more iconic than the DB4 GT Zagato, built from 1960 through 1963. Penned by Ercole Spada, it was designed as an aerodynamic road racer built to compete with Ferrari’s 250 GTO and other track terrors of the day. That only 19 were ever built handily explains the decision to create 19 pairs of 2021 Twins.

“The essence of this project was to create a perfect garage, comprising two desirable and collectable cars; Coupé and Speedster,” says Andrea Zagato, who further explains, “Despite having created over 450 models since our formation, we chose Aston Martin, which has surely been our most prestigious partner over the last 50 years, to mark this celebration. The cooperation with R-Reforged ensured that we could create an instant classic.”

The Twins celebrate the centenary of Italian coachbuilder Zagato.  Photo: Courtesy of R-Reforged.

All 38 cars comprising the 2021 Twins are based on the final iterations of the series-production Aston Martin Vantage V12, made until 2018. The initial task entailed sourcing approximately 40 Vantage V12s to become “donors,” though nothing visible remains of the original Vantage once R-Reforged has its way.

The interior of the Speedster.  Photo: Courtesy of R-Reforged.

Each of the Twins features the aforementioned carbon-fiber bodywork, and each is identifiable through all new styling that includes revised fenders, new front bumpers, an active-aero rear wing and 19-inch center-lock wheels. Importantly, the Aston Martin 5.9-liter, 48-valve V-12 engine has been tuned to deliver 600 hp—about 80 more than standard. Added power comes, in part, through a revised aluminum air intake and lightweight titanium exhaust.

Customers who want to flaunt the carbon-weave look can opt for a visual carbon finish, requiring an additional 400 hours to get the weave just perfect and to impregnate the carbon with the desired color tint. Of course, customers can select a paint-to-sample color for both Coupé and Speedster, different or identical in hue, and in a variety of finishes. Inside, Bridge of Weir leather—a staple hide of the British luxury car industry—is used for the luxurious cabin. Construction of each car is accomplished over 16 weeks by a team of 12 R-Reforged craftspeople who carry out every task by hand.