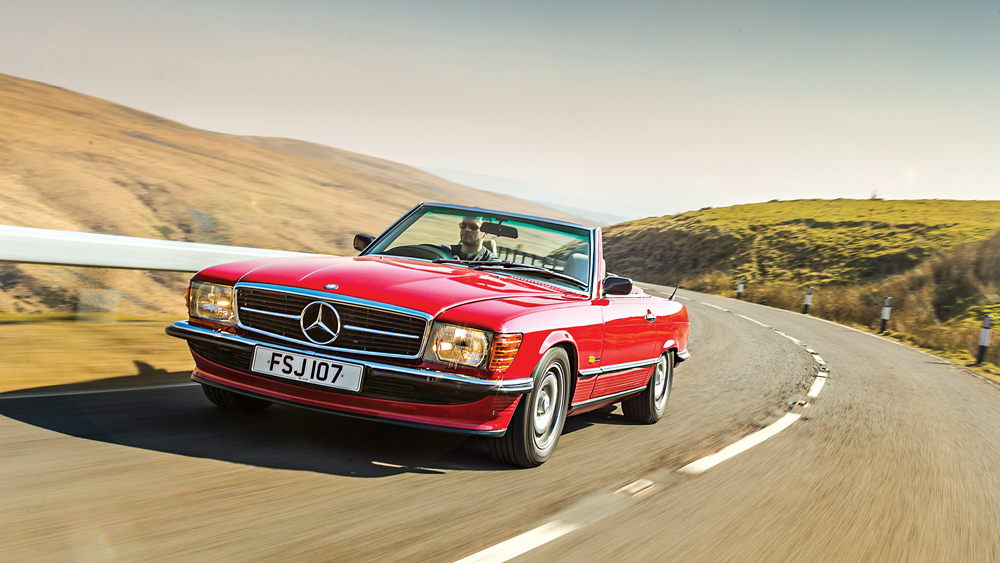 The Mercedes-Benz R107, more commonly known to the public as the SL that was on sale from 1971 until 1989, had the longest production life of any model from the German marque, apart from the original G-Wagen. Yet for those of a certain age, myself included, this will always be the Dallas SL. Driven by the character Bobby Ewing in the prime-time TV show, it seemed to epitomize 1980s glamor and success.

This 1989 300 SL restomod looks near-stock and wears the same Signal Red paint as Ewing’s famous 450 SL, but the fictional Texas oil baron would likely be dumbfounded by how it drives. The UK-based SL Shop has modified the R107 from an easygoing cruiser into a genuine sports car.

Located in the English city of Stratford-upon-Avon, SL Shop is one of the world’s leading classic SL specialists. At the time of my visit, it has around 60 cars for sale—mostly the R107 and its W113 “Pagoda” predecessor—plus many more in various stages of restoration. Highlights include several R107s converted to endurance rally spec, plus a lone 300 SEL 6.3: the first Mercedes-Benz modified by AMG.

The SL Shop’s SportLine conversion is a long way from the European muscle cars that swiftly became AMG’s calling card. “Our goal was to make sympathetic and respectful upgrades,” explains SL Shop’s Francis Robertson-Marriott. “It blends the R107’s classic character with modern handling and performance.” This isn’t a full Singer-style reimagining, in other words, but a relatively subtle twist on the restomod recipe.

From the outside, the only obvious giveaway is the SL’s lowered ride height, achieved via coilover springs with custom Bilstein shocks. Most vehicles would look slammed after a 3.2-inch suspension drop, but the regular R107 has so much fresh air beneath its arches that the 15-inch alloys still have plenty of space. Parked between two oh-so-pretty Pagodas, the SportLine’s broad shoulders and squared-off stance are even more striking.

When it left Stuttgart, Germany, 33 years ago, the SL was fit with a 3.0-liter M103 straight-six engine that mustered a modest 185 hp and 118 ft lbs of torque. Today, those figures have rocketed to 255 hp and 250 ft lbs of torque. Upgrades include a ported and polished cylinder head, spikier camshaft, lightened flywheel, redesigned throttle body, bigger injectors and a stainless-steel exhaust. With a curb weight of 3,100 pounds, the car sprints from zero to 60 mph in 5.9 seconds and tops out at 169 mph—truly in a different performance league from the stock R107, which manages the same rate of acceleration in 9.6 seconds and can reach 126 mph.

Opening the reassuringly heavy door, I immediately spot the stick shift—quite a rarity on an R107. The five-speed manual transmission comes from an early Mercedes C-Class, with closely stacked ratios for livelier acceleration. That aside, the beautifully retrimmed interior looks almost original. There are red stripes on the seatbelts and white SportLine dials, but you’ll search in vain for a touchscreen or any token slabs of carbon fiber. Plush leather and polished wood are the order of the day here.

Twist the key and the car announces its presence with a resonant rumble that’s more V-8 than straight-six. The driving position is quite upright, the large steering wheel is offset towards the center and the soft seats offer little side support. Then there’s the long hood, which necessitates threading the car carefully through SL Shop’s packed parking lot. First impressions don’t exactly scream sports car.

That changes when you reach an open road, though. The gearshift is pleasingly notchy and mechanical, and a shortened throttle linkage elicits an instant response. The modified engine feels muscular in the mid-range, then pulls with real urgency to its 7,000 rpm limiter (extended by 1,000 rpm, hence the custom tachometer). As for the engine soundtrack, the custom twin-pipe exhaust totally transforms it into a searing metallic snarl that gets under your skin like a hungry mosquito.

The biggest surprise, however, is how the SL handles. The original car is so relaxed it’s almost somnambulant, but the SportLine conversion feels wide awake. Its chassis is focused and tenacious, with limited body roll and plenty of grip. It encourages you to attack corners at speeds that would have a normal R107 squealing in protest. And crucially, it does so without ruining the ride, which is taut but still supple.

If there’s a chink in the armor, it’s the recirculating ball steering. Despite tweaks by SL Shop, it can’t offer the directness or clarity of, say, a classic Porsche 911. Then again, the R107 is a better long-distance cruiser than any air-cooled 911, with roomier rear seats and a far more practical trunk. It’s also a less obvious starting point for a restomod, yet the end-product is every bit as cool and covetable.

This particular example is currently for sale at $160,000, or SL Shop can build one to your exact specification—including the donor car—starting at $185,000. You can also buy the various SportLine parts separately to convert your own SL. My advice? Do it while the R107 is still undervalued, as prices for the Pagoda are now stratospheric. And go for Dallas red, obviously.