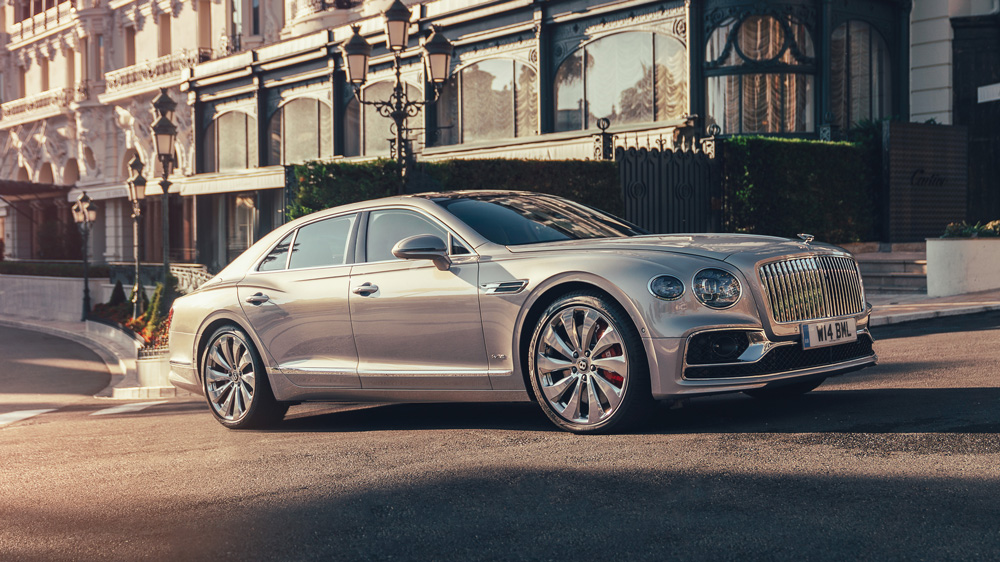 You descend upon Monaco, and it feels as if you’re in a grand spectacle each time. The elegant pastel pink and cream buildings with balconies and terraces overlooking the shimmering Mediterranean exude a bit of panache. All of this is heightened when viewed from the back seat of the new Bentley Flying Spur, which boasts quite a bit of theater and spectacle itself.

“On the exterior, I love the new Flying B the most,” Bentley chief designer Stefan Sielaff tells Robb Report. The proud ornament was a substantial project unto itself, a modern symbol for a brand that placed the hundredth candle on its birthday cake, 2019 being Bentley’s centenary year. And this third generation of the Flying Spur is quite a gift.

A commanding W-12 engine cranks a substantial 626 hp and 664 lft lbs of torque, helping the British limousine sprint from zero to 60 mph in a supercar-quick 3.7 seconds. The 2020 Flying Spur is also capable of reaching a top speed of 207 mph, and it can do it in sixth gear. The last two gears of the eight-speed dual clutch help this iteration of the W-12 engine achieve 15 percent better fuel economy.

Four driving modes ensure that, like Walt Whitman, the Flying Spur contains multitudes. Coasting through Monte Carlo, along Casino Square and the Hotel de Paris, you’ll likely want to be in Comfort, or the Bentley mode. Custom allows you to tailor the experience further. But along the Route Napoleon, on the switchbacks of the alps that watch over the Côte D’Azur? You’ll want to reach for the dial—perfectly placed so you can switch modes while keeping your eyes on the road—and turn it to Sport.

A W-12 engine with 626 hp and 664 ft lbs of torque is paired with an eight-speed dual clutch transmission.  Photo: Courtesy of Bentley Motors Limited.

Here, the W-12’s grunt becomes noticeably louder, a bit menacing. More power can be sent to the rear wheels, and you could be forgiven if you momentarily forget you’re not in a svelte sports coupe. On the hairpins up towards the Chateau St. Roseline, you might think the Flying Spur was five feet shorter, and the newly added, electronically controlled rear-wheel steering only enhances this impression. The optional upsized 22-inch wheels fitted to our car carve and cut into corners with shocking precision for a vehicle of this size, length and weight.

Part of the magic is the Flying Spur’s exceptional chassis, a version of which is also used by Porsche. An active anti-roll system is powered by a 48-volt battery. All of these technologies work seamlessly to deliver considerable levels of comfort in the cabin. But it’s also the details that are everywhere to appreciate.

The cabin is a case study in refinement.  Photo: Courtesy of Bentley Motors Limited.

That Flying B hood ornament that Sielaff is proud of? It can retract at the touch of a button. The cut-crystal LED matrix headlights are visually engaging, and the sculpted proportions wrap the eyes around the exterior. But it’s the interior that has received especially noteworthy attention.

The exceptional “digital detox” rotating display that has proven popular on other Bentley models and, so far, has a 90 percent take rate on the new Continental GT, also adds to the theatrical nature of the four-door luxe sedan. Here the 12.3-inch touchscreen rotates away, leaving an elegant wood veneer in its place.

Even the Flying B hood ornament exudes elegance in motion.  Photo: Courtesy of Bentley Motors Limited.

Our favorite new feature, happens to be Sielaff’s as well: the world’s first 3-D leather on a production car. “They made it nuclear proof,” Sielaff jokes, referring to the testing and effort to make sure the sculpted leather retains its shape over time, and in extreme heat or cold. The effect is enchanting, and draws the eyes in. If there was one option that is an absolute must, it’s this.

“That’s something we’re very proud of, because the idea first came in our EXP 10 Speed 6 Concept, and we were able to translate this to production,” Sielaff notes. And Bentley, which has been doing superior wood applications in its cars about as long as any other carmaker, will also have a forthcoming 3-D wood, available through its Mulliner specification team.

With a top speed of 207 mph, the Flying Spur can sprint from zero to 60 mph in 3.7 seconds.  Photo: Courtesy of Bentley Motors Limited.

A touchscreen controller in the rear—one that is as intuitive as an iPhone—can also be removed and held in hand. There you can slide the front passenger’s seat forward for extra room, or adjust the shades, climate, or even massage settings to your preference. Audiophiles will delight too, with a choice of three upmarket systems, including 16-speaker Bang and Olufsen and 2,200-watt Naim systems on offer.

Perhaps most impressive is the Flying Spur’s ability to meld luxury, true comfort, performance and technology. Most successful cars are good at one, perhaps two. Bentley itself couldn’t claim as much just a few short years ago. Most were technologically deficient, and while powerful and fast, none had this level of agility and all-around performance. The new crop of Bentleys has changed this in a dramatic fashion, and the 2020 Flying Spur will join the Bentayga and Continental GT models in propelling the brand further than ever before. Deliveries of the marque’s newest four-door begin early next year.