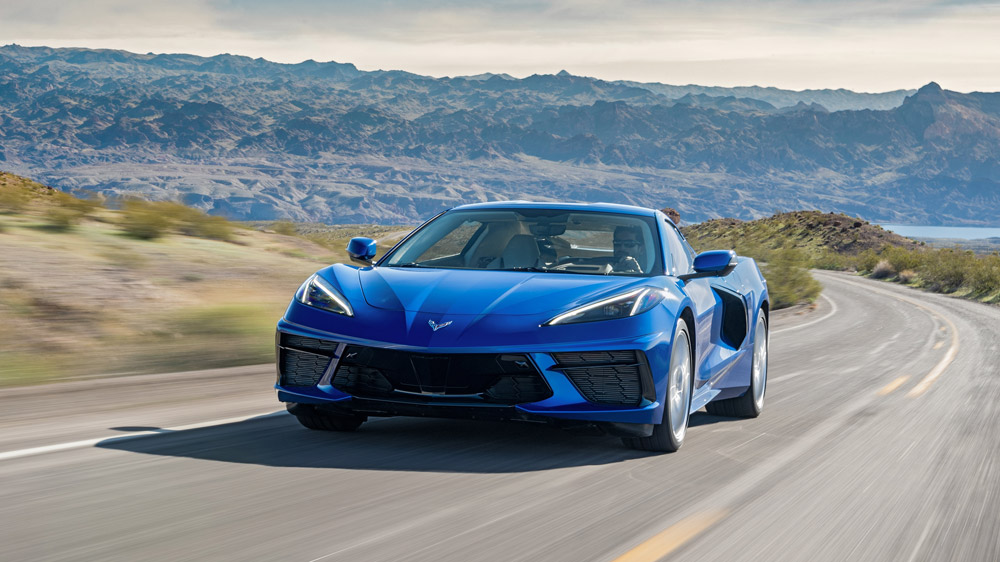 For car enthusiasts, an all-new Corvette is a big deal. Every 8.4 years, on average, Chevrolet introduces a completely redesigned ‘Vette. With that comes abundant fanfare and opinions, both positive and negative, but unified in their conviction. To folks who have high-octane blood, a reengineered Corvette is basically like witnessing a new president getting inaugurated.

To American car lovers, specifically, the Kentucky-built Corvette is a symbol of national pride. It’s America’s sports car. Granted, the Dodge Viper conjures up patriotism, too, but that snake’s been bagged and tagged three years. And, sure, there’s plenty of reason to be proud about the Ford GT but, ultimately, the GT is an unattainable supercar that’s actually built in Canada. When it comes to the vehicle that represents the USA, Corvette is the last word.

However, the eighth-generation (C8) Corvette Stingray is not just another redesign. It’s a reinvention. Since its birth in 1953, the Corvette has had its engine up front, but not this year. Chevy now has its famous small block V-8 located behind the driver and ahead of the rear wheels. The Corvette is now mid-engine like a Lamborghini or McLaren. In addition, Chevrolet no longer offers a manual transmission. You can only get a dual-clutch, automatic gearbox, also as with a Lamborghini or McLaren.

Corvette fans are famously vociferous about change. Remember the uproar in 2014 when the C7 brushed 53 model years of quad-circular taillight design off its backside? I do. I was the editor of Corvette Forum at the time, and complaints about the new trapezoidal taillights deluged the discussion boards.

Those passionate about America’s sports cars are no less vocal today about the Corvette’s drastic conceptual shift. Some think Chevrolet shouldn’t have called this mid-engine car a Corvette. Some think the Corvette should have split into two models: one front-engine and one mid-engine.

After testing the all-new 2020 Corvette Stingray in Las Vegas recently, I can report that none of that is necessary. From behind the wheel, the C8 is still all Corvette and a new bag of endearing tricks.

For starters, you can still use the car for weekend getaways. The new model stores up to two sets of golf clubs out back. That’s sure to keep older ‘Vette fans happy. Just like ‘Vettes of yore, the C8 coupe features a removable roof panel that stows inside the rear trunk compartment. However, having the roof back there eats into available space. Fret not, though. There’s still a front trunk, or “frunk,” that can swallow a piece of carry-on luggage, as well as a laptop bag. In total, the new vehicle offers up to 12.6 cubic feet of cargo space. The convertible variant offers the same amount (compared to the 10 cubic feet from last year’s open-top version). And because the solid, folding top electrically retracts ahead of the engine, cargo space stays the same regardless of roof position.

The 2020 Corvette remains as comfortable as ever, though. Typically, with mid-engine sports cars, you have to clamber over a high structural door sill to gain entry. Once you’re in, your legs are forced to the right in order to make room for an intrusive front wheel well. Not with the Corvette. Once you’re in, even with your left foot on the dead pedal, your legs rest straight.

This arrangement helped make my 90-minute drive northeast from the Las Vegas Strip to Valley of Fire State Park incredibly easy. The new Stingray offers three different seating options: GT1 (base), GT2 (luxury) and GT3 (racing). My tester had the Napa leather-covered GT2 seats, which offered terrific support. The GT3 seats are too aggressive for everyday driving. Even for my rail-thin frame (5-feet, 10-inches tall and 139 pounds), the GT3 seat-bottoms make me feel like I’m stuffing my backside into a 5-gallon paint bucket. As finely crafted and well-designed as the C8’s cabin is, the confining GT3 seats almost feel out of place in an otherwise cosseting cockpit.

There’s plenty of screen real estate inside the new car, starting with the sharp, 8-inch center display. GM’s infotainment system is simple to use, but Apple CarPlay and Android Auto come standard if you prefer your smartphone’s interface. Ahead of the driver sits a 12-inch, reconfigurable instrument-cluster display. Corvettes with the 3LT package also get a head-up display, embedded navigation, a performance data and video recorder, a front curb-view camera, a rear-camera mirror and wireless phone charging. The 3LT package also includes driver-assistance features like blind-spot monitoring and rear cross-traffic alert.

On my way to Valley of Fire, I remove the coupe’s painted roof panel and store it in the rear trunk. The targa-style top’s weight, removal and storage processes are pretty much the same as last year. Surprisingly, top-down driving in the C8 is unpleasant at highway speeds. With the windows down while charging above 60 mph, there’s excessive wind buffeting. Air gathers behind my neck and left shoulder.

Raising the windows removes that creepy column of swirling air, but then, above 80 mph, the Corvette’s open roof creates high- and low-pressure oscillation inside the cabin, known colloquially as “the helicopter effect.” No C8 Corvette drop tops were available to test on this first drive, but I’d imagine the convertible’s optimized top-down aerodynamics would yield a more comfortable open-air experience.

It’s also unfortunate that the Corvette’s available 14-speaker Bose Performance Series audio system is unable to overpower the top-down wind noise at highway speeds. Mid and high frequencies remain clear, but low frequencies get lost in the rushing wind. The C7 never had this problem. With the C8’s top up, though, the system sounds just fine. That’s because with the coupe’s roof up, the new Corvette is as quiet as the average four-door sedan. Stomp the loud pedal, and things remain pretty quiet, still. Those who love the classic Chevy V-8 snarl might be disappointed at how muted the engine sounds at wide-open throttle. Chevrolet augments the engine noise with frequencies that flow through the speakers, so the engine’s tone, while muted, sounds fantastic. Chevy does include a performance exhaust system as part of the $5,000 Z51 package, which ratchets the volume up a smidge.

The C8’s well-isolated and balanced chassis feels like it can handle way more power than what the 6.2-liter LT2 engine provides. The big V-8 produces 490 hp and 465 ft lbs of torque sent to the rear wheels through a quick-shifting, eight-speed, dual-clutch transmission (a GM first). Chevy claims the model can make it from zero to 60 mph in 3 seconds while on the way to a quarter-mile time of 11.2 seconds and a top speed of 194 mph. The Z51 package shaves 0.1 seconds off the standard car’s zero-to-60 mph time by adding an electronic limited-slip differential, as well as an extra 5 hp and 5 ft lbs of torque.

Chevy claims the model can make it from zero to 60 mph in 3 seconds and reach a top speed of 194 mph.  Photo: Courtesy of Chevrolet Division of General Motors Company.

Launch control gets me off the line efficiently, with just the right amount of wheelspin. But once the Stingray hooks up, I realize this is the calmest I’ve ever felt accelerating to 60 mph in 3 seconds. Mind you, I’ve recently test-driven a Tesla Model 3 Performance. Dialing back the Corvette’s traction control makes acceleration more interesting, but the real takeaway here is that this car is desperate for another 200 hp.

During the journey, my test example’s standard suspension offers plenty of ride compliance, but when veering over into the passing lane, I notice some body roll. During acceleration and braking, there’s also some rear squat and front dive. Despite the body motions, the Stingray on standard suspension feels planted.

Also solid are the standard brakes, which are well-modulated. In spite of the new Corvette’s brake-by-wire system, there’s still a proper amount of feel through the pedal. Throttle response is quite good, as well.

The following day, I head to Spring Mountain Motorsports Ranch to wring out the C8 on track. I kick off the morning on an autocross course, alternating between a standard suspension Stingray and a Z51 with the optional, $1,895 magnetic dampers. The Z51 with Magnetic Selective Ride Control exhibits none of the standard car’s body roll. Its upgraded Brembo brakes and stickier tires make the higher-spec C8 more responsive and controllable.

That said, I prefer the standard car on the autocross. Because only 40 percent of the C8’s weight rests over the front axle, light braking on corner entry is imperative if you want excellent turn-in. The standard suspension’s slight bob and weave gives me a greater sense of where I’m putting the car’s mass, and thus enhances engagement.

Coming out of turns, the standard Stingray feels looser on corner exit, meaning more opposite lock. In the base-suspension car, I get more of a sense that I’m taming a beast. The Z51, on the other hand, makes me feel like the Corvette is doing the driving for me.

The C8’s steering is plenty direct and accurate, but I expected more feedback through the wheel. The steering is good enough but, compared to other mid-engine sports cars, it’s unremarkable.

Out on the big track, Chevy provided a fleet consisting of solely Z51s with magnetic dampers. No matter the corner, the more capable C8 exhibits all the right behaviors. It feels unflappable near its incredibly approachable limits. Venturing past the traction threshold, it’s a breeze getting the Z51 back in order. And yet, that abundant obedience borders on making the car feel dull. After only a few laps, I yearned for the standard example.

But even as good as the non-Z51 Corvette is, it failed to blow me away. Some of the blame for that could be attributed to how great the C7 Corvette remains. Every time I’ve driven a C7, I’ve been awestruck at how special that car feels. On paper, the C8 is better than the C7. The 2020 model is more powerful, faster at the limit, better balanced, more comfortable, has a 10 percent stiffer chassis, is a higher quality product and is more advanced. And yet, all those superior attributes feel as though they’re working independent of one another.

The C7, on the other hand, feels like more than the sum of its parts. It may not be as high of an achiever as its successor, but there’s a magic about the seventh-gen car that its successor is lacking. Give it time, though. Radical reinventions like the C8 take time to ripen.

Is the 2020 Chevrolet Corvette Stingray worth acquiring? Absolutely. Coupes are now arriving at dealerships, while the convertible is expected to hit dealer lots in April. My bottom line: The new ‘Vette is a remarkable achievement for something starting under $60,000, but it’ll be a while before the C8 matures into the outstanding machine I’m confident it can be. Maybe that machine is the forthcoming Stingray convertible. Maybe it’s an eventual higher-powered Corvette variant. Either way, I feel the magic looming.