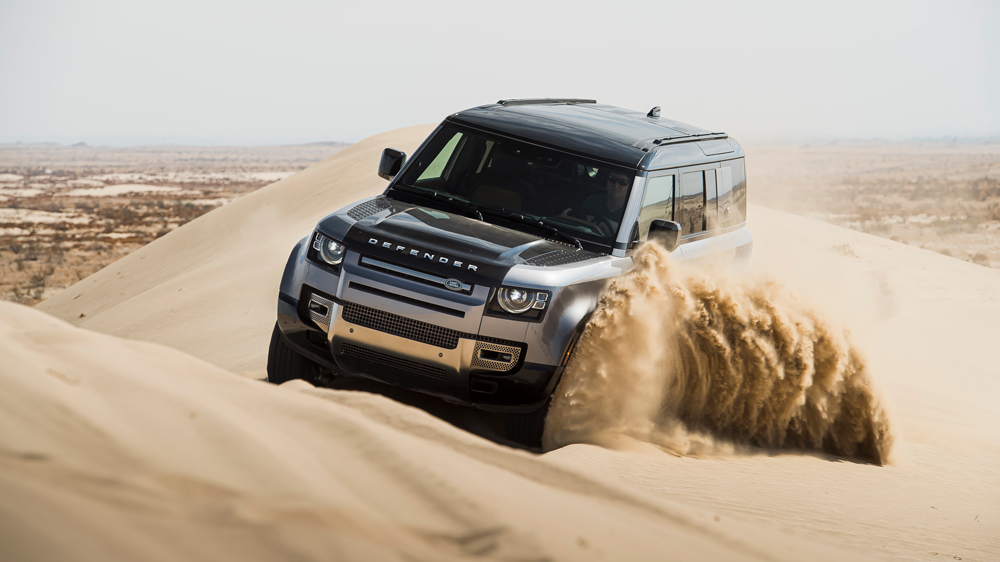 These days, the Land Rover brigade has a lot to be excited about. With Land Rover’s introduction of its brand-new Defender, enthusiasts finally have a 21st century version of the marque’s ultimate off-roader. Launched in 1948, no other vehicle has the bushwhacking persona of an original Series 1 Land Rover. That model, later called the Ninety (two-door) and One Ten (four-door), was eventually renamed Defender, and remained essentially unchanged from 1983 to 2016.

With their wavy sheet metal and unapologetically bare-bones design, even the final versions look more at home in a 1960s-television episode of Daktari than on modern roadways. The Cambrian-Era trilobite of the vehicular world, elderly Rovers soldier on quite capably, supported by a number of companies whose specialty is restoring the old beasts and offering some surprisingly powerful and luxurious upgrades. So it is that the new Defender is being met with much fanfare by serious off-roaders, whose only real alternative in the new-car market is the Jeep (and recently, Bronco) or Mercedes-Benz’s upscale and expensive G-Wagen.

Built at a new facility in Nitra, Slovakia, the Defender starts at a modest $49,900 and presents an enticing proposition in the Land Rover lineup, comprising the Discovery and Range Rover series that includes Autobiography models, which can easily crest $200,000 a copy. While those, like SUVs from Bentley and Rolls-Royce, have been engineered to have credible off-road capability, not one of them has been designed from the ground up to primarily excel in such undignified behavior as rock-crawling, fording waist-deep water or jumping Sahara-sized sand dunes. The likelihood that any of these luxo-SUVs—or the pricey Mercedes-Benz G Wagen for that matter—will ever see duty more challenging than vying for parallel parking along Rodeo Drive is slim indeed.

The team at Land Rover was eager to show off the capabilities of their accomplished new Defender 110 in the Southern California desert. Here, temperatures during our test-drive excursion hit 116 degrees and made one appreciate the stamina and resolve of early explorers like Juan Bautista de Anza, who in 1775—without benefit of roads, and accompanied by soldiers, servants, padres and various species of quadrupeds—made the trek from Mexico to find an inland route to San Francisco. It even made me wonder how one could embark today on a desert adventure in any vehicle not equipped with life-saving A/C.

Acknowledging its long and rich legacy, the design of the new Defender recalls the original, but avoids becoming a retro-pastiche. Instead, it presents a contemporary interpretation of the classic four-door. It will be followed in early 2021 with the Defender 90, a shorter, two-door version. Six models of 110 are available: Defender, Defender S, Defender SE, Defender HSE, Defender First Edition and Defender X. The first two are powered by a 2.0-liter turbocharged inline-four with 296 hp and 295 ft lbs of torque.

The Defender SE we drove, starting at $62,250 ($72,780 as equipped) is the entry into the P400 series and has a 3.0-liter turbocharged inline-six with a 48-volt electric supercharger. This power-train configuration develops 395 hp and 406 ft lbs of torque. Our example’s zero-to-60 mph time of 5.8 seconds is mightily impressive for a vehicle with a drag coefficient of 0.38. Despite its upright windshield and a shape less aerodynamic in appearance than a Galapagos Tortoise, the Defender exhibits little fatiguing wind noise at speed, and is as surprisingly quiet and comfortable as a freeway flyer.

The vehicle has the ability to negotiate 45-degree ascent and descent gradients.  Photo by James Lipman/jameslipman.com, courtesy of Land Rover.

The interior is tastefully simple and gimmick-free, yet hardly the hair shirt and bed of nails encountered in the original Defender. For a bit of aesthetic flair, designers have chosen to expose structural elements inside the pragmatic cabin, which features a new central-mounted Pivi Pro3 infotainment system and 10-inch touchscreen, an intuitive interface with standard Apple CarPlay and Android Auto. Comfortable front seats are divided by a generous center console that folds down to become a third seat, while the rear seats accommodate three occupants, with optional third-row seating for two.

Despite its curb weight of 4,830 pounds, the Defender is compact and feels nimbler and lighter than it has any right to, especially considering its ability to carry nearly 2,000 pounds of payload, and the fact that it has an 8,201-pound towing capacity.

An eight-speed ZF automatic transmission puts power to the road, or surfaces which are anything but. The Defender’s all-new D7x aluminum platform makes the body three times stiffer than the previous body-on-frame design, and features a fully independent electronic air suspension, twin-speed transfer box and permanent all-wheel drive. Configurable Terrain Response fine-tunes the suspension with a range of settings—from Sand to Comfort—to suit conditions. And, the Defender can dip its toes into three feet of water, an exercise of which we weren’t able to avail ourselves during our scorching desert drive, where the only water encountered was bottled, residing in the capacious cupholder.

Dimensionally, the Defender is a winner. With extra-short front and rear overhangs, 11.5 inches of ground clearance, 38-degree approach, 40-degree departure, 31-degree ramp breakover angles and the ability to negotiate 45-degree ascent and descent gradients, it’s the most capable Land Rover ever. The new Defender’s unflappable off-road talent became apparent as we turned off CA-86 onto a nondescript scenic trail that quickly descended into a barren and inhospitable place.

Extra-short front and rear overhangs and 11.5 inches of ground clearance help make the 2020 Defender the most capable Land Rover ever.  Photo by James Lipman/jameslipman.com, courtesy of Land Rover.

One stretch in an alluvial fan of eroded sandstone—a narrow, miniature canyon—had the Defender deftly rocking side to side, simultaneously lifting opposing wheels at either end. The image of a ponderous pachyderm, carefully balancing on alternating feet at the command of its trainer, immediately came to mind as I followed signals from the experienced Land Rover guides. The Defender was equally adept blasting up and down sand dunes, thwarted only once by this driver’s ineptitude. To its credit, the Defender—like a horned lizard wiggling out of an ant den—adroitly extracted itself and then scaled the dune with a more vigorous application of throttle.

The Defender dressed for a day on the town.  Photo by James Lipman/jameslipman.com, courtesy of Land Rover.

Elegant in its simplicity and attractive in a way that the most functional devices are, the Defender is a daily driver and a jungle or desert tool at one and the same time. Like a GI Joe action figure or Barbie doll, it can be dressed for most any role, and four optional Accessory Packs—Explorer, Adventure, Country and Urban—let owners choose a persona that most closely matches their own.

Land Rover also offers 170 individual accessories, including a front-bumper-mounted remote-control electric winch, enhanced exterior protection, an assortment of interior trim and even personalized illuminated treadplates. Altogether, its indefatigable character and superb design make the Defender the vehicular equivalent of a Swiss Army knife; an indispensable tool for adventure in both wild and tame environments.