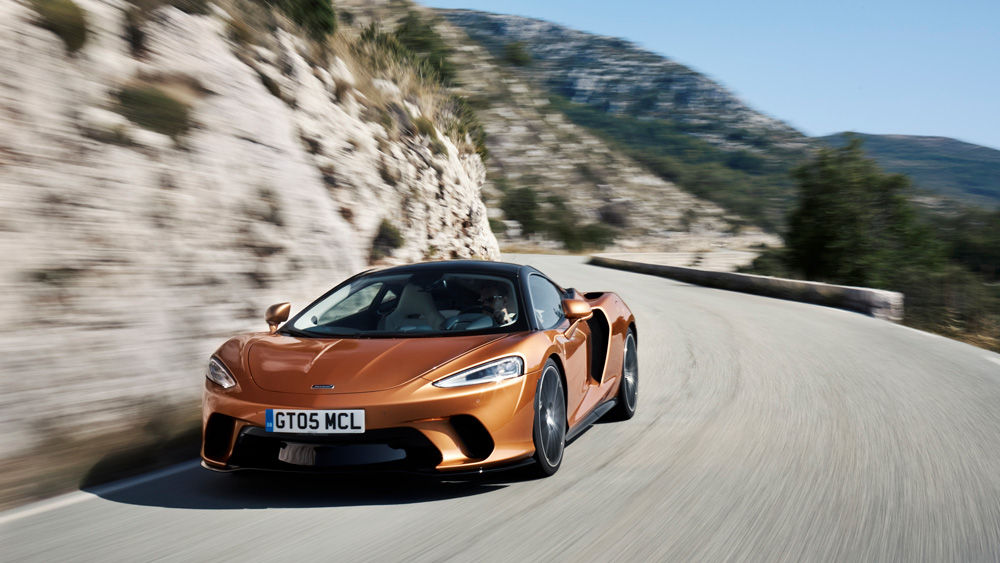 McLaren was gravely concerned that its clients who fancied alpine sports couldn’t stow their skis inside one of its existing coupes. So much so, that the company tasked its lads from Woking to whip up the new GT to fill that void. We jest; that wasn’t the impetus for the new grand tourer from McLaren, though there were frequent mentions about the ability to tote your skis (or golf clubs) within the class-leading 20.1-cubic feet of storage during the launch drive in St. Tropez.

In reality, McLaren sought to provide customers with its version of a grand tourer, aiming squarely at capturing market share away from the likes of Aston Martin and Bentley fans. However, the “grand tourer” moniker manifests itself in a wide variety of ways across various brands. Since McLaren didn’t stray far from its foundational supercar DNA when sitting down at the GT drawing board, the result is vastly different than, say, a DB11.

For starters, the GT—which begins at $213,195—is a true two-seater, with dihedral doors, a mid-mounted twin-turbo V-8 that’s nestled low behind a carbon-fiber safety cell. That 4.0-liter mill is a cousin of the screaming demon that is the beating heart of the 720S, but the tune in the GT realizes an admirable 612 hp and 465 ft lbs of twist. A higher compression ratio and small, low-inertia turbos (in a bid to minimize lag) are employed, too, and the scramble to 60 mph occurs in about 2.9 seconds. Keep your foot buried, and the GT will top out at 203 mph. If you think that sounds eerily like every other McLaren, you’re not wrong.

So, what’s grand tour-y about it? Externally, subdued design demarcates it from its Sports, Super Sports, and Ultimate Series brethren. No wheel-arch vents, no honking rear wing, no sinister or ferocious bodywork. Just sleek and elegant lines over the 15-foot vehicle, McLaren’s longest ever. The five bespoke GT colors on offer aren’t bombastic, either. A dashing bronze, a rich dark blue, a subtle green and more all indicate the GT is meant to blend more than its louder cohorts. The GT receives the largest wheels McLaren’s ever affixed, with 20-inchers up front and 21s in the rear. Multi-spoke wheels, custom-crafted for the vehicle, bolster the refined feel, surrounded by custom Pirelli rubber.

McLaren’s grand tourer covers zero to 60 mph in 2.9 seconds on its way to a top speed of 203 mph.  Photo: Courtesy of McLaren Automotive.

The sum result is that the GT has a presence. While nosing into a posh hotel on the Cannes Croisette, an Aston Martin Zagato and Bentley GT convertible ahead, and a Lamborghini Huracán behind, passersby chose to pepper the GT with compliments.

Behind the wheel, comfort abounds. As a zealous fan of the 720S and the incredible feedback it translates from the road, I have to admit that prolonged time spent in that beast can be a mite taxing, especially wedged into the narrow race seats while bouncing along over imperfect asphalt. In the GT, however, plush leather seats make lengthy hauls a breeze (though we wouldn’t argue with the future inclusion of ventilated seats, especially when the temps spike as they did during our test drive).

Anti-roll bars and adaptive dampers, akin to the 570S setup, gleefully sop up the few bumps and dips we encountered along otherwise pristine French countryside roads. A new Proactive Dampening Control system in the suspension “reads the road ahead,” per engineers, and runs everything through an algorithm to respond predictively within two milliseconds in hopes of mitigating choppiness. The ride in the GT is far more forgiving than its forebears, something that’s instantly recognized and appreciated.

It’s also significantly quieter in the cockpit. An active exhaust keeps the satisfying engine growl to a minimum under casual driving but will ratchet up the noise in Sport or Track mode, or under heavy acceleration in Comfort mode. Even with the exhaust valves wide open, conversations in the cabin can be held without raising your voice, a concept that doesn’t ring true in the 600LT or the 720S.

What’s not muted is the steering feel. The same wonderful, hydraulically assisted steering you’re used to on McLaren’s sport coupes appears in the GT, keeping everything bright and sharp the minute you turn the tiller. It will nip into a corner with precision while giving you solid feedback. Extra boost helps make low-speed maneuvers easy, particularly helpful during parking and creeping around tight corners in French mountain towns.

And several French mountain towns strung together are routes upon which McLaren hopes its GTs embark. Longer journeys are enabled by the aforementioned luggage space, both in the trunk and the rear. Lift the glazed tailgate to discover that the low positioning of the engine affords a chunk of space above the chassis back there. This luggage bay can fit a set of golf clubs or two sets of 185 cm skis (and boots!), and optional SuperFabric—reinforced, easy-to-clean, stain-resistant, quick-drying material—is available as a bed-liner.

Custom luggage to fit this space is offered by McLaren, mostly because your existing luggage likely won’t fit in the uniquely shaped area. Given that the bay sits just above a boiling engine, an innovative cooling system that uses the radiator fan to push air into several layers of materials brings the temperature down from several hundred degrees to around 100 degrees in about three inches. It’s a thoughtful—and necessary—consideration, given that our two backpacks emerged from the space after a day of driving quite warm to the touch.

If judged by apparent attributes, McLaren’s definition of grand tourer seems to be a car that’s fast, fun, communicative but not noisy, comfortable yet still dynamic, and overflowing with storage. (Did we mention that it can hold your skis?!) That’s an interpretation we can applaud.