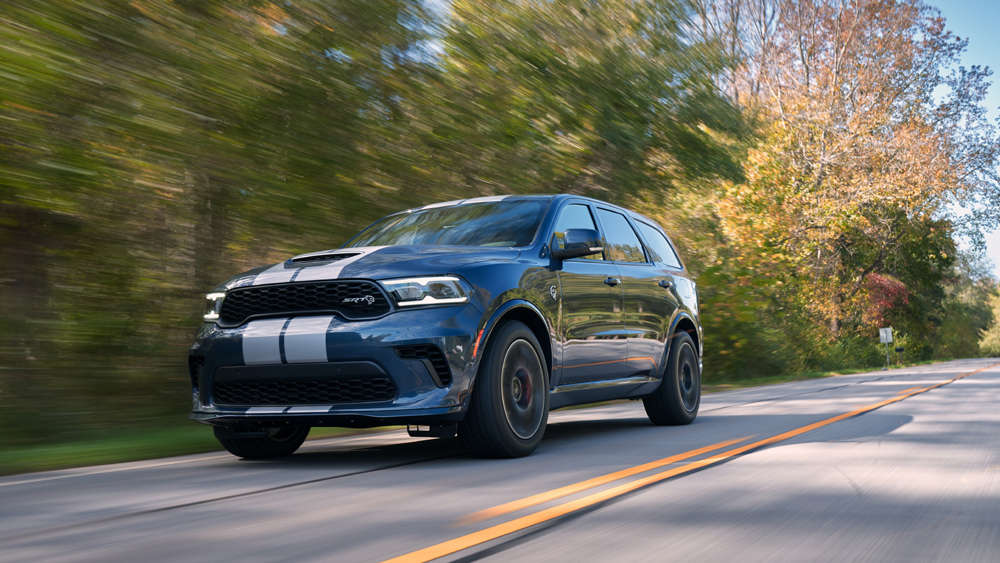 In an era when electrification is being endlessly touted as the next big thing, the intrinsic appeal of the 2021 Dodge Durango SRT Hellcat is obvious the first time you press that big red start button. A seven-passenger vehicle with the heart of a no-holds-barred muscle car, the new supercharged Durango embodies the kind of hot-rodded ostentatiousness that, recently, has only been pulled off by the Street & Racing Technology (SRT) division of what was formerly known as Fiat Chrysler Automobiles. (It appears the team will be reconfigured after FCA’s recent merger to become Stellantis.)

Does the world need a 710 hp three-row SUV that can sprint to 60 miles per hour in 3.5 seconds and top out at 180 mph? Absolutely not. Is the world a better place for it?  You bet.

Of course, even Dodge is willing to concede that such a machine faces significant automotive headwinds. Production of the Durango SRT Hellcat is limited to a single year and capped at a total of 2,000 examples. Still, considering the fact that the entire allotment is already spoken for at the dealer level, it’s clear that the motoring public’s appetite for V-8-derived horsepower remains as strong as ever.

But while its straight-line capability is stunning, what makes the 6.2-liter Hemi-powered behemoth truly remarkable is how well it does everything else. Stopping power is provided by six-piston Brembo brake calipers with 15.75-inch rotors up front, while four-piston calipers with 13.8-inch discs are installed at the rear—a combination that brings the 5,700-pound Durango to a halt from 60 mph in a mere 116 feet. These big brakes not only effectively corral the big brute’s power and mass after some judicious use of the go pedal, they should also come in handy when dealing with the vehicle’s 8,700-pound towing capacity.

Only 2,000 examples of the model will be made.  Photo: Courtesy of FCA US LLC.

And although the Durango SRT Hellcat’s suspension is noticeably firmer than that of a garden-variety Durango, the SRT team worked with the folks at Bilstein to develop new three-mode adaptive dampers with a wider dynamic range than the ones used in last year’s Durango SRT 392, the previous high-water mark in the Durango lineup. The result is better ride quality in Auto mode (the default setting) and better body control in Track mode, the most aggressive option. There’s new rear damper mounts on hand as well, which are 18 percent stiffer than the previous units, working in conjunction with the re-tuned shocks to help reduce understeer while allowing for greater corner entry and exit speeds.

Out on the winding tarmac of the Angeles National Forest, about 20 miles northeast of downtown Los Angeles, it’s clear that the engineering required was worth the effort. Despite its high center of gravity and sheer mass, the SUV surprised us with its responsive handling and sharp steering. Given the size of this beast, its competence in the corners is commendable, although don’t expect to run down any 911s out in the canyons. The all-wheel-drive system and eight-speed automatic transmission also make good use of the abundant power on tap, while the brakes remained consistent throughout our flogging sessions, reassuring us that we’d be able to scrub off the speed when needed.

It looks the part of a Hellcat as well, with a unique grille, a two-piece front splitter and an SRT-exclusive rear spoiler design. Coupled with an aggressively styled hood and big 20-inch x 10-inch wheels, the top-dog Durango has legitimate presence. But while the performance and aesthetics offered by Hellcats has helped keep them in the spotlight since the supercharged Challenger and Charger models landed on the scene in 2015, it’s the everyday civility they offer that has kept automotive enthusiasts coming back for more.

That split personality has become a hallmark of Dodge’s approach to contemporary high-performance tuning, and the Durango SRT Hellcat continues the tradition. It means that even when you’re stuck in commuter traffic, being behind the wheel can still be a pleasant experience: set the (optionally available) adaptive cruise control, dial in the heated and ventilated seats to your liking, crank up the burly Alpine audio system and let the miles roll by.

Along with speed, the Durango SRT Hellcat demonstrates its power with an 8,700-pound towing capacity.  Photo: Courtesy of FCA US LLC.

The 2021 model year brings a host of updates for the entire Durango lineup, and the biggest improvements among them are found in the cabin. The interior now takes inspiration from that of the Challenger, offering a more driver-focused layout, and the SRT Hellcat model gets red-accented gauges along with a number of Hellcat callouts on the front and second-row seats.

Perhaps the biggest upgrade comes by way of the onboard technology, as the 2021 Durango is one of the first vehicles in the FCA/Stellantis ecosystem to receive the all-new Uconnect 5 infotainment system. It’s been reworked from the ground up, boasting a 10.1-inch bonded-glass touchscreen and enhancements like wireless Apple CarPlay and five times the processing power of its predecessor.

The infotainment system takes its cues from modern smartphones, both in its interface design and feature set. And as it now runs on Android OS, the graphics are sharp, input response is near-instantaneous and the overall design shows a strong emphasis on personalization. In addition, a wireless charging pad is situated below the center stack, which means you can use CarPlay or Android Auto for Google Maps navigation while also charging your phone—all without ever plugging in a cable. That might not sound like a big deal at first glance, but in practice, it’s incredibly useful and convenient.

The interior features the new Uconnect 5 infotainment system with a 10.1-inch touchscreen and five times the processing power of its predecessor.  Photo: Courtesy of FCA US LLC.

Taken as a whole, the Dodge Durango SRT Hellcat plays to inherent strengths of the platform while delivering on its promises of eye-watering performance and undeniable curb appeal. It may be out of step with where things are headed these days, but for anyone who both loves muscle cars and is obligated to the needs of a larger family, it’s just what the doctor ordered.