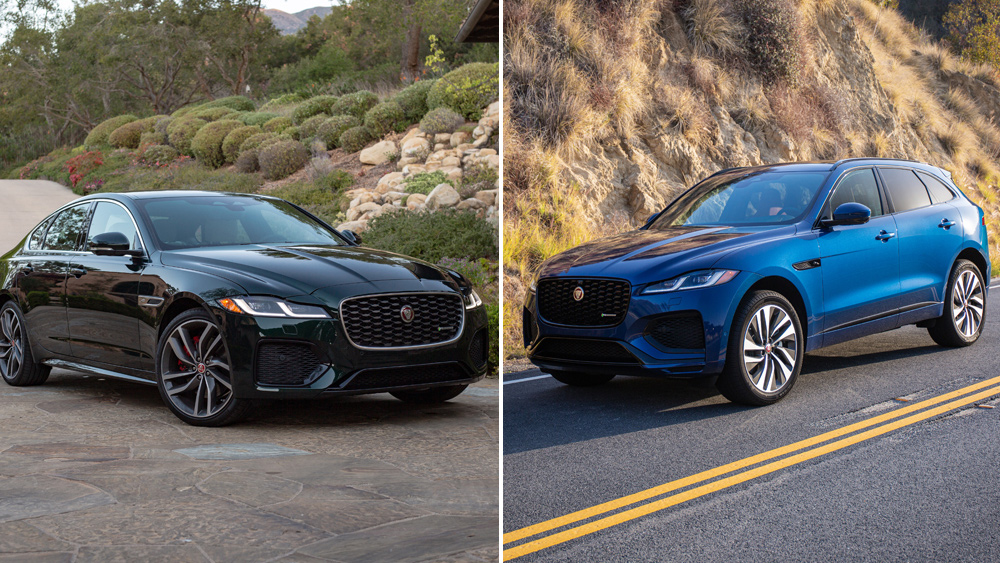 Jaguar is a brand that combines three favorite automotive traits to various degrees: performance, luxury and style. In the 1960s, models like the Mark 2 and the E-Type represented the fastest cars, by a considerable margin, that you could get at a semi-affordable price. In the 1970s, the marque underwent a significant transformation, mainly driven by the US market: Jaguars became plush and luxurious, the brand image was defined by polished burl walnut dashboards, Connolly leather and, of course, the silky V-12 engine. By 2007, with the advent of the original XF, the automaker had refocused on contemporary, modern styling epitomized by designer Ian Callum’s first-generation XF and, subsequently, by the F-Type.

Now Jaguar is reinventing itself again. On the cusp of the electric age that is presumably upon us, Jaguar has announced that it will go fully electric by 2025. That doesn’t just mean there will be no more conventionally powered cars launched; it means that the entire current lineup, with the exception of the I-Pace, will be gone in just three-and-a-half years. And the consolidation of the portfolio has begun.

For the grand finale, Jaguar has made the XF sedan and F-Pace SUV more attractive, and more affordable. We recently drove both of them—specifically, the XF P300 R-Dynamic SE AWD with a 296 hp four-cylinder, and the F-Pace P400 R-Dynamic S powered by a 395 hp straight-six engine.

Let’s start with the XF, which according to Jaguar USA CEO Joe Eberhardt represents “a segment that has been reduced dramatically over the past few years.” Up to the last model year, Jaguar offered both the more compact XE and the XF and, just two years ago, Jaguar also offered the big XJ. Now it’s XF only, and it has gone from 10 versions down to only 3. The Sportbrake is gone, and so is the six-cylinder engine. There are no more diesels, either. How is less choice a good thing?

Not so fast, says Eberhardt: “If you have fairly small volumes with a highly complex and proliferated lineup, it gives the consumer the appearance of choice.” He notes, however, that customers often went to the dealer and found out that most variants were sold out. “So we focused on combinations that are most interesting from a customer perspective,” adds Eberhardt. And Jaguar made them less expensive, by a substantial amount. The entry-level price was lowered from $51,100 to $43,995, about 20 percent to 25 percent cheaper than a similar Audi A6, BMW 5-series or Mercedes-Benz E-Class.

No wonder the XE is gone. “As you know, in the US bigger is better,” Eberhardt says. “There is really no benefit in having the smaller car.” But there is a benefit in having a small engine: With the switch from the aging AJ V-6 engine to the new Ingenium straight-six, there is simply no more room under the hood of the XF. A 2.0-liter four-cylinder, sold with 246 hp and rear-wheel drive, or with 296 hp and all-wheel drive, must do. According to Eberhardt, “A lot of our customers don’t know whether they have a four-, six- or eight-cylinder engine. They just know that around 300 hp will allow them to accelerate as quickly as they need.”

Before getting behind the wheel of the XF, we first notice the updated exterior. Little has changed, the most significant upgrade being the more aggressively styled headlights with double “J”-shaped LED stripes. And the XF sedan is now fitted with the smoked taillights previously used on the defunct Sportbrake version. Even the entry-level models feature the gaping front air intakes of the R-Dynamic variant, distinguished only by bright accents.

The body has aged well, its proportions hinting at the rear-wheel-drive platform. The drag coefficient is an excellent 0.25, slightly better than before the facelift. The lower air intakes are more aggressive than before, especially on the standard versions, but conversely, the look is less elegant.

Yet those are small modifications. Far greater changes have taken place inside: The cockpit features generous, horizontal lines, a sculpted steering wheel—taken from the I-Pace—and a large, slightly curved touch-sensitive central screen that operates, among other things, Jaguar’s new “Pivi Pro” infotainment and navigation system that’s “always connected” and wants access to your phone and calendar in order to learn about your travel habits. It’s standard on the SE models, and it’s a quick and very competent setup.

The new XF’s interior is one of the more pleasant we’ve been in. Al Whelan, Jaguar’s creative director of interior design, mentions: “What we wanted to do is bring the lovely materials and the perforated grain leather close to the customer, where they can touch them.” Indeed, the materials are soft, beautiful and perfectly executed. And the “Est. 1935 Jaguar Coventry” lettering is a posh reminder of the brand’s heritage.

The interior of the XF features a sculpted steering wheel, taken from the I-Pace, and a large touch-sensitive central screen.  Jaguar Land Rover Automotive PLC.

We did not fall in love with the new gear selector, however. The commonplace palm shifter, with a well-hidden unlock button, replaces the automatically rising rotating knob that had been a futuristic signature element of the brand. Another feature we could do without is the gesture-activated roof blind, a gimmick that doesn’t simplify anything. And while we are complaining, the open cupholders in the rear armrest look downright cheap. Moreover, for a new dashboard, the integration of the head-up display is loveless.

Starting the (clumsily named) XF P300 R-Dynamic SE AWD with the push of a button brings the Ingenium Four to life unobtrusively, aided by a noise-cancellation system. The engine allows for a rate of acceleration from zero to 60 mph in 5.8 seconds, and little distinguishes this power plant from similar four-cylinder offerings by the competition, but that’s not a bad thing. It does the job with competence and efficiency, aided by the ubiquitous and meritorious ZF 8HP automatic transmission that’s used in a vast number of premium cars.

The chassis hits a good compromise between ride and handling, with precise steering and a suspension setup that does a very nice job at absorbing uneven surfaces. And although the lane-keeping assistant did not excel, we prefer to turn those systems off anyway as soon as the drive commences.

Priced at $49,995, only $6,000 above the entry-level model, the top-tier XF we drove adds all-wheel drive, a more powerful engine tune and a plethora of extra equipment. It’s a steal.

Moving on to the updated F-Pace, we found that it starts out where the XF reaches its ceiling. The four-cylinder F-Pace begins at $49,995, but unlike the XF, the popular SUV comes with four-, six- and eight-cylinder engines. We drove the F-Pace P-400 R-Dynamic S, priced at a very competitive $65,200 and powered by a 395 hp 3.0-liter straight-six that drives all four wheels through a ZF eight-speed automatic.

The changes to the exterior of the F-Pace are subtle but a bit more extensive than on the XF. The SUV gets more angular taillights, and the sensors for the assistance systems are better hidden. The interior receives a major improvement with a dashboard—previously shared with the defunct XE—that is now identical with the one on the new XF. Thus, it comes with that big central screen, luxe materials and the same unremarkable gear selector.

Unlike the XF, the F-Pace’s engine compartment has room for the 3.0-liter straight-six, a marvel of an engine that, in P400 trim, cranks out a healthy 395 hp, allowing the vehicle to cover zero to 60 mph in 5.0 seconds and cruise easily into triple-digit speeds. While the engine itself sounds silky-smooth, only the most tech-savvy occupants will appreciate the high-pitched whir of the electric supercharger that provides instant throttle response before the exhaust-fed twin-scroll turbocharger spools up.

The handling characteristics are still at the top of the class, the steering is precise. Yet it is comfortable enough on virtually every surface, and with the large trunk and generous rear seats, the updated F-Pace remains a veritable long-distance cruiser.

Also in contrast to the XF, The F-Pace doesn’t undercut the competition’s price, but is right in the center of its segment. And given its undeniable qualities and style, it remains one of the most attractive offers in the class. But we strongly recommend checking out the wild F-Pace SVR, priced at $84,600 and powered by a supercharged 5.0-liter V-8 that cranks out an impressive 550 hp.

The F-Pace’s interior receives a major improvement with a dashboard that is now identical with the one on the new XF.  Jaguar Land Rover Automotive PLC.

Having spent time with the new XF and F-Pace, we find that they blend performance, luxury and style with a true value story. It’s hard to believe they represent the end of an era. No more gasoline-powered Jaguars after 2025? Perhaps it’s time to get one of the last ones, or hope for a “Plan B” in Coventry.