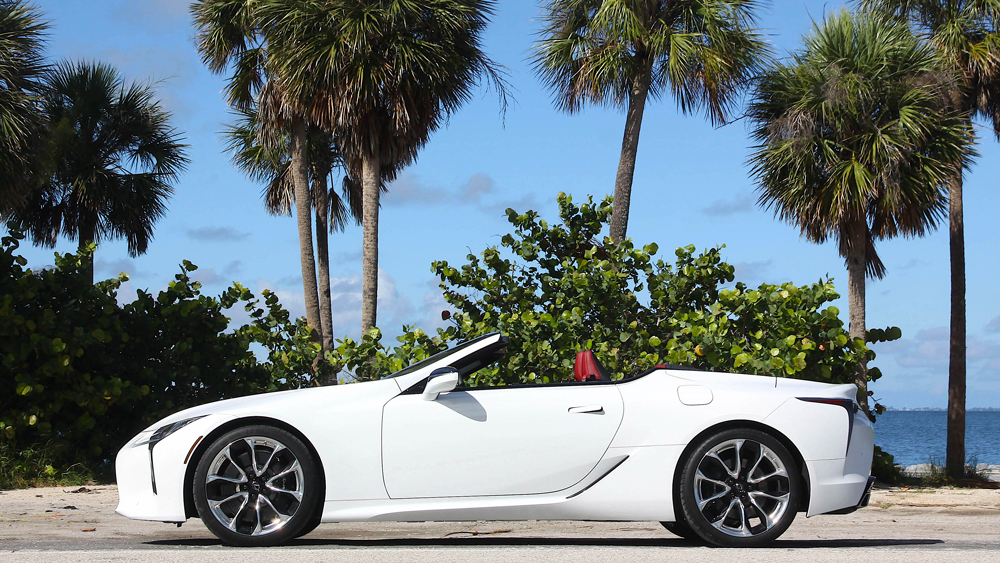 Five minutes ensconced behind the perforated leather helm of the sublime new 2021 Lexus LC 500 Convertible leaves you in no doubt that you’re in the company of a grand tourer of the highest order. Here’s an ideal two-seat, drop-top cruiser for exploring California’s Pacific Coast Highway through Big Sur, or ambling along Florida’s A1A to Key West, that buttery-smooth V-8 whispering in the background, long-travel suspension hoovering-up every tarmacadam imperfection.

Just sit back, soak-up the sun and feel those zephyrs of breeze swirling around the cockpit. Maybe stream your favorite playlist on the booming Mark Levinson sound system while you absorb the scenery. Life in an LC 500 Convertible is certainly good.

So, Dr. Jekyll, would you like to say a quick hello to Mr. Hyde? All it takes is the twist of a knob to dial up Sport+, a couple of pulls on the magnesium paddle shifters and a stomp on the aluminum right pedal for the big V-8 to rip, roar and unleash its 471 hp. Revs soar, tailpipes go from reticent to full riot and this hip-high projectile lunges toward the horizon, covering the zero-to-60 mph dash in just 4.6 seconds.

Anyone thinking the LC 500 might have gone soft in its transformation from brawny coupe to cosseting convertible, or anyone with memories of its flaccid SC 430 predecessor, should think again. Lexus has truly done a superb job in lopping the top off the elegant LC 500 Coupe. Roadsters are typically runners-up in the beauty department compared to their hardtop siblings. Not so the LC.  Top up or down, it’s simply gorgeous, and the lack of a permanent roof accentuates the car’s mile-long hood, its raked-back screen and short muscular rear. Bolting on a set of optional 21-inch forged rims—like the ones on our test car—only heightens the visual drama.

The lack of a permanent roof accentuates the car’s extended hood and muscular backside.  Photo by Howard Walker.

And 15 seconds is all it takes for the four-layer canvas roof to lift, fold and disappear into a well behind the seats—even at speeds up to 31 mph. Only the top’s slightly clunky, herky-jerky action and the ugly display of wires and plastic brackets beneath the tonneau, seen in the rearview mirror when it’s in mid-fold, detract from the elegance of the movement.

But folding the top does give you a view of the beefy, die-cast aluminum brace between the rear shock towers; part of the heightened structural work that’s gone into stiffening the car to compensate for becoming a convertible.

With the top lowered but all four windows raised, the interior stays remarkably calm and unruffled.  Photo by Howard Walker.

The other success story with this model variant is its key lack of wind buffeting for those inside. With all four windows raised—conveniently enacted by a single switch—and with the help of a seemingly undersized but effective clear polycarbonate screen between the rear seats, the interior stays remarkably calm and unruffled, even at close to triple-digit speed. And for additional turbulence reduction, there’s an origami-style wind deflector that clips behind the front seats.

While all the extra bracing and added weight of those top-raising hydraulic pumps has piled on around 217 extra pounds to the car’s waistline, you’d never know it. The 5.0-liter normally aspirated, direct-injection V-8 is still a masterpiece of power and refinement, and works in true concert with the smooth-shifting, super-intuitive 10-speed automatic transmission.  And the choice of six drive modes—Eco, Comfort, Normal, Custom, Sport and Sport+—are there to perfectly suit your mood.

The Sport and Sport+ settings will also adjust steering feel and precision together with damper firmness to deliver crisp and poised cornering when the blacktop gets twisty. Yet, even with those 21-inch wheels at each corner, the ride never becomes brittle.

Yes, like the opposition, options will quickly engorge the LC’s sticker; those forged 21-inch rims add $2,650, the Mark Levinson audio is another $1,200 and a Touring Package with fancier leather, embossed headrests and surround sound audio adds another $5,290.

Or, you can have it all with one of the Inspiration Series examples that come painted in a spectacular shade called Structural Blue with a blue top and white semi-aniline leather—a deal at $119,800. However, as the latter is limited to 100 units, they’re going fast in more ways than one.