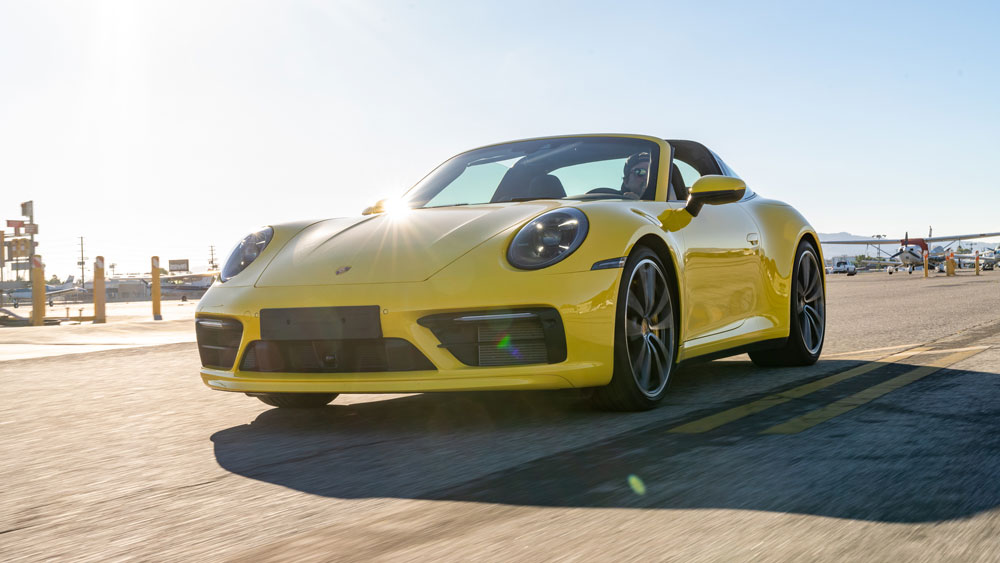 In Los Angeles, the Strip of Sunset Boulevard is the erstwhile stomping grounds of the low-slung guitar types of the city’s vaunted music scene. While that section of neon-lined asphalt is famous for being the playground of every lothario from Jim Morrison and Axel Rose to Vince Neil and David Lee Roth, the roads just west are playgrounds for another type of pleasure-seeker: the dissolute gearhead.

It is here on this twisted tarmac—where towering palms replace nightclub marquees—that we’re testing the 2021 Porsche 911 Targa 4S’s mettle, and we’re not being easy on it. The corners come quick and hard, and often wildly off-camber. Luckily, late in the evening, these roads are empty, allowing you to really stretch this open-air 911’s legs. And the feeling is… exquisite.

This is where Porsche’s alphabet soup of proprietary technology begins to work, with precise orchestration akin to the Bavarian Radio Symphony Orchestra. The active anti-roll bars of the PDCC (Porsche Dynamic Chassis Control), rear-axle steering (both only available on the 4S) and active dampers grant the Targa enough leash to attack corners with ferocity, without shirking barely a wiggle. It’s insane how planted, how utterly unshakeable this 911 4S feels at speed. Laser-fire downshifts from the eight-speed double-clutch PDK (Porsche Doppelkupplungsgetriebe)—quite possibly the best transmission on the planet—ensure that you’re always in the perfect rpm bandwidth. And should you ever get too froggy on that throttle, which you almost surely will, the PCCB ceramic disks will scrub speed quick.

The Targa’s roof configuration makes it the Goldilocks of open-air touring.  Photo: Courtesy of Porsche AG.

Through it all, the 911 Targa 4S’s 3.0-liter twin-turbo boxer-six plays conductor, infusing this glorious Teutonic machine with rolling chords of power. Its numbers aren’t headline grabbing in the age of the modern supercar, 443 hp and 390 ft lbs of torque compared to the Targa 4 which makes 379 hp and 331 ft lbs of torque. But on this platform, and with AWD wide track and sticky Pirelli P Zeros, it’s all you’ll ever need. Explosive throttle (zero to 60 mph in just 3.4 seconds) allows for heart-fibrillating exits from an apex, and loin-warming bursts uphill as peak torque hits at only 2,500 rpm.

Keeping you connected to machine are some of the best performance seats in the business. The 18-way adjustable Sport Seats Plus ride that fine but nebulous line between supportive and unforgiving, not handcuffing you in place as you slalom through the hills of Bel Air so much as hugging you like mom.

The cosseting interior of the 2021 Porsche 911 Targa 4S.  Photo: Courtesy of Porsche AG.

And that controversial Targa top. Is there a better solution in the automotive world for open-air driving? The unsealed cabin connects you with reality. There’s no “video game” effect here, or sound-deadened womb separating you from the elements. With the soft top safely tucked away in the trunk, the elements play with you: the wind blow-dries your coif; the sounds of physics and petrol combustion assault your ears. You are here in the moment, young grasshopper. Be present.

Then there’s the convertible action: the way the soft top stacks into the rising back end is more Transformers than rolling top MG. The fact that our Targa 4S was Bumblebee yellow only exaggerated the robotics of it all. Never mind that the chronograph-like movement of this 992 generation Targa is the same as that of the previous gen 991 Targa—that’s unimportant. Swiss watchmaker Jaeger-LeCoultre‘s celebrated Calibre 101 movement was invented in 1929 and the company is still hand-assembling its 95 components to this day. If it ain’t broke, don’t fix it.

The car’s 3.0-liter twin-turbo boxer-six is responsible for 443 hp and 390 ft lbs of torque.  Photo: Courtesy of Porsche AG.

Some aesthetes might argue that the Targa is totally unnecessary. There’s already the Carrera coupe for the average commuter, then numerous higher-performance versions from the Turbo to the GT3 for those with an eye on the track. Meanwhile, if you want to catch some rays while zipping to and from the country club, the cabriolet is there for you, roof wide open in welcome.

We might be the minority who argue that the Targa isn’t the superfluous option—it’s actually the ideal option. If you’re not a track rat, that is. Because the 4S offers all the performance any non-racer could ever ask for, while its Targa roof is the flirty Goldilocks of open-air touring—it’s just right.

Raise your head and no matter where you look, all you’ll see is sky. You don’t need the roof to go all the way down as in the Cabriolet. It’s also one of the few “supercars” we’ve driven where you don’t have to crawl up every parking lot ramp at 2 mph (or activate a hydraulic nose lift). This may seem like a small detail, but in LA, where you’re hitting water drainage gutters every time you cross Sawtelle, La Cienega or Crenshaw, this front clearance is an opiate. The same can be said for the overall drive experience of the new Targa 4S in general.