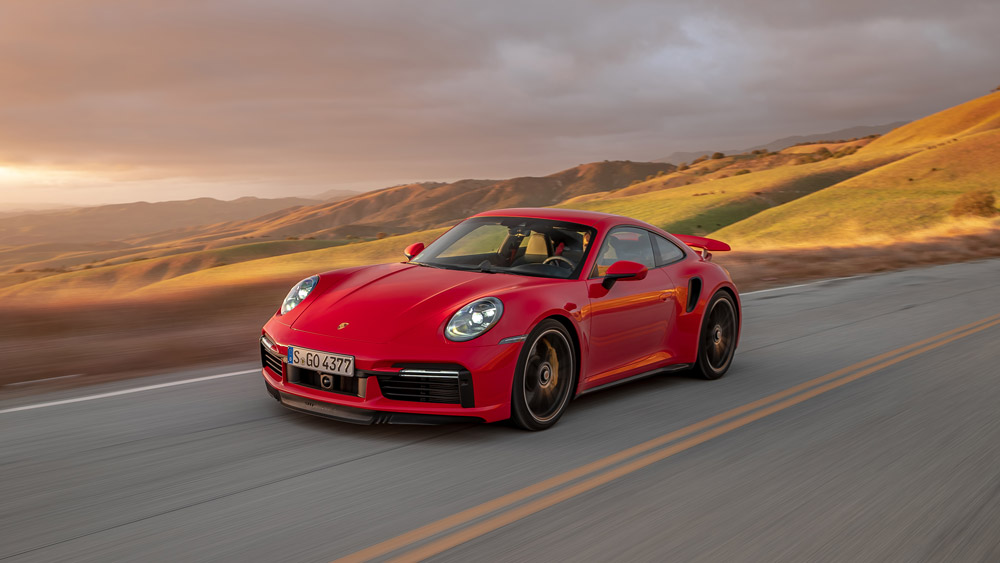 In 2020, every single 911 available in showrooms is turbocharged. But decades ago, turbocharged Porsche 911s were the exception not the rule. The Turbo-with-a-capital-T was an exclamation mark in the lineup, a flare-hipped outlaw with shock-and-awe presence and a frightful tendency to swap ends when driven indelicately.

“Turbo” now carries a different weight for 911s than when the model debuted back in the disco era. Porsche’s limited production RS models (see: GT2 RS, GT3 RS) often assume the role of brutish speed freak, while the Turbo has evolved into a deceptively complex and understated persona.

To cut to the quick, the most direct way of experiencing the depths of the new 2021 Porsche 911 Turbo S’s capabilities is to engage and deploy launch control—preferably with an excitable passenger by your side. Why the militaristic lingo? Because launch control in the 911 Turbo S is the four-wheeled equivalent of point-and-shoot warfare. Simply turn the dial to Sport +, hold and release the stability control toggle and press both pedals firmly until the “Launch Control activated” prompt appears; release the brake pedal, and you’re go for liftoff, dumping 640 hp and 590 ft lbs of twin-turbocharged torque to all four wheels.

The instant onslaught of kinesis catapults the sports car to 60 mph in 2.6 seconds, and it will eventually reach 205 mph if you have the grit to keep the pedal buried (and also happen to have an open runway at your disposal). But here’s the rub: the pyrotechnics may be spectacular, and perhaps potentially detrimental to your relationship with the aforementioned copilot, but the staccato g-force generated actually runs contrary to the Turbo S’s inherent personality.

Years of relentless refinement have honed Porsche’s Turbo models into exemplars of swift-and-effortless driving. For the 2021 model year, the rear-mounted flat-6 engine gains 60 hp over its predecessor, using turbines that change their geometry in order to deliver the optimal amount of boost depending on engine speed, creating smooth and flexible power that’s accessible nearly anywhere in the rpm range.

The suspension system makes 200 calculations per second in order to remain supple when possible, and stiff when necessary; infinitely variable air intakes and an active chin spoiler conspire with a large, electrically actuated wing to deliver the optimal balance of aerodynamic, drag-defying slipperiness and grippy downforce; four-wheel steering enhances rotation through slow and medium corners, but increases stability at higher speeds.

Call it better living through engineering, but the Turbo’s intense behind-the-scenes machinations have a way of making the driver feel more capable than he or she is— and when the circumstances are just so, actually bolstering the passenger’s comfort.

The interior’s tech and trappings.  Photo: Courtesy of Porsche AG.

Case in point: after testing the limits of my wife’s patience with launch control, she became unexpectedly calm as I negotiated the notoriously twisty Angeles Crest Highway at speed. One reason is that the 911 Turbo’s smooth power delivery and surprisingly compliant ride untangles these roads with efficient expedience. While it feels connected, it’s never so direct as to be jarring or uncomfortable. And that helps rebuild trust with the person whose intestines you just attempted to rearrange.

Another relationship test arrives in the form of a freak rainstorm that drenches the mountainside. The precipitation triggers a prompt on the digital dashboard to engage Wet mode, a new feature on this eighth-generation 911 that is calibrated to treat the driver like a full-grown adult. The setting gently softens power delivery and lowers stability control thresholds— but only if the driver selects it manually. And somewhat reassuringly, pressing the throttle to the floor will still summon full engine output, a feature most car manufacturers’ lawyers would balk at.

Maneuvering this high-powered sports car in the rain is about as zen as mountain motoring gets. The 3,636 pounds of aluminum, steel, and glass have a way of interpreting driver inputs like a love language. Yes, the Turbo can brutalize the tarmac and attack an apex like a mercenary, but it can also lap up miles of corners while indulging its passengers in comfort. Cue the float like a butterfly, sting like a bee clichés…

Sure, when it comes to ultimate long-distance comfort, the 911 Turbo S is no Bentley Continental GT or BMW 8 Series, two of the finest luxobarges dedicated to transcontinental land travel. And while sharply styled, the disruptive and head-turning power of splashier offerings from Lamborghini and McLaren eludes it. But for drivers targeting high-speed transport with Bauhaus simplicity and passenger-pleasing ease, the 2021 Porsche 911 Turbo S hits a rare sweet spot of speed and usability that few, if any, supercars have managed to achieve.