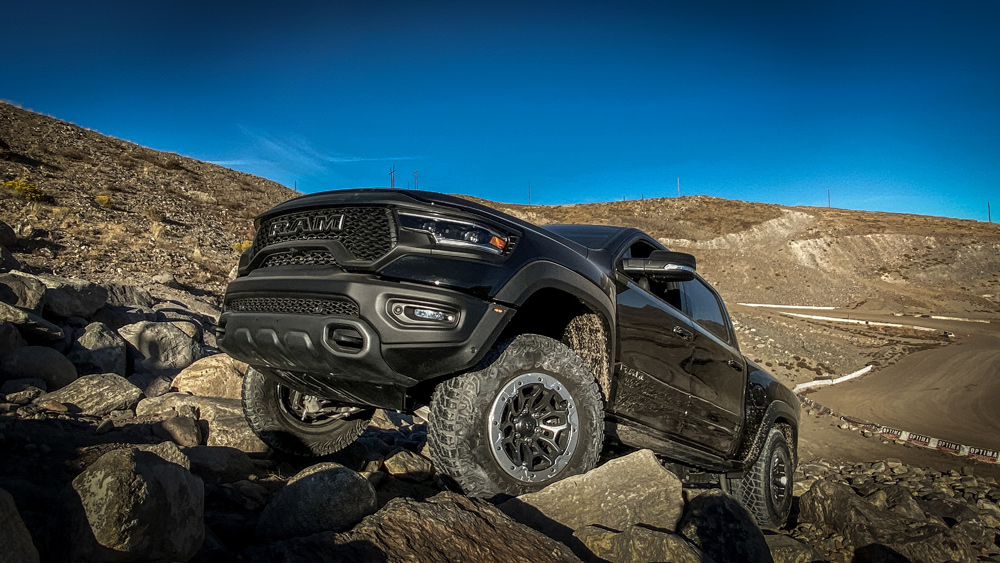 I was advised to approach the jump at 55 mph, so in the interest of investigative journalism, I hit it at 65 mph. OK, I was behind the wheel of the 702 hp Ram 1500 TRX, so pushing it was purely for my own thrill. Now serving as Ram’s halo truck, the TRX is the answer to Ford’s F-150 Raptor. Though long before jumping the TRX or driving it 100-plus mph off road, you need only press the start button to suss out that Ram’s primary message is, “Your move, Ford.”

You’ve long heard the tired adage “there’s no replacement for displacement,” but as soon as the TRX’s 6.2-liter Hemi V-8 is fired up, those words blare inside your mind with marching-band fanfare. The Ram’s opening rumble basically emasculates the Raptor’s gurgle. The numbers further delineate this point. The TRX’s supercharged V-8 is 252 hp stronger and offers 140 ft lbs more twist than the Raptor’s twin-turbocharged 3.5-liter V-6. The TRX, however, is 653 pounds heavier than the Raptor, so straight-line acceleration doesn’t feel drastically different between the two.

Still, the TRX is one quick beast. Engage launch control, and you can hit 60 mph in 4.5 seconds. Six ticks later and you’re barreling past 100 mph on the way to a 12.9-second quarter-mile at 108 mph. From behind the wheel, the truck doesn’t seem as quick as those numbers suggest, but the stopwatch doesn’t lie. In the Raptor, it took me roughly four seconds to accelerate from 65 to 80 mph. On the same stretch of highway, the “T-Rex” climbed the same spread in half the time.

The model starts at $71,790, but falls just under six figures if fully loaded.  Photo: Courtesy of FCA US LLC.

The TRX’s cabin probably does too good of a job isolating you from the outside world, thus the lack of agreement between the stopwatch and the seat of the pants. The interior seems recording-booth quiet and finishing-school refined. In addition to heated and ventilated leather seats, my loaded tester also featured a leather-wrapped dash with carbon-fiber accents, as well as beautiful suede trim on the center console and door cards. As premium as the TRX’s interior is, it appears that Ram designers envisioned the cabin of a mythical Lincoln-badged Raptor, and then set that as the target to meet or exceed. That said, the TRX could stand to lose the tacky center console specs plaque, as well as the loud “TRX” embroidery underneath the front-seat headrests.

There’s plenty of tech to complement the model’s abundant creature comforts. Taking center stage is the standard 12-inch Uconnect 4C touchscreen that can interface with Apple CarPlay and Android Auto, as well as an available 900-watt, 19-speaker Harman Kardon premium audio system. That’s enough wattage to get your heart pumping fast enough to make you want to blast through just about any trail or fly like Michael Jordan across a set of dunes.

Tearing through the track at Wild West Motorsports Park in Sparks, Nev., the TRX made me feel like an accomplished trophy-truck racer living a real-life version of the “Super Off Road” arcade game. Whether hitting jumps 10 mph too fast or at the recommended speeds, the big-bad Ram is quite the softie. Though my eyes could see that I was returning to terra firma after a second in the air, as far as my butt was concerned, I was touching down into a foam pit.

It was actually in the turns where I was most impressed with the new Raptor-fighting Ram. Left-foot braking in the Baja drive mode relaxes the stability control, which allowed me to achieve a respectable drift angle through turn one. Crew-cab pickups are really easy to drift thanks to their outrageously long wheelbases (145.1 inches in this truck’s case), but the TRX’s outstanding steering helped with the fun here. The sedan-like 16.3:1 ratio helps the big Ram feel more maneuverable on the track, as well as on the road. As you dial in more lock on paved roads, the steering even communicates that the truck is leaning harder on its chunky tread blocks. I never thought I’d be praising a truck’s steering feel in this day and age, but the Ram TRX’s steering is so good, I consider it the best rack I’ve ever experienced in a pickup.

Now, you’re not going to canyon-carve in a Ram TRX, but still, the truck is pretty composed in the corners. There’s body roll, but not as much as you’ll find in the Raptor, although the TRX’s ride quality is just as lovely. A nicely calibrated brake pedal is connected to 15-inch brake rotors at all four corners, which makes easy work of halting this 6,350-pound behemoth.

The privilege of eating Raptors is going to cost you. The Ram TRX starts at $71,790, including $1,695 for destination. That’s about $13,000 more than the base price of a Ford F-150 Raptor SuperCrew, but the TRX is easily worth the difference. Expect to pay more than $97,000 if you tick every option box, but that’s a bargain considering a high-end trophy truck can cost roughly a million bucks.

The 2021 Ram 1500 TRX brings the Ford F-150 Raptor’s theme into the new decade, with more power, performance, durability, tech, luxury, and, perhaps most importantly of all, bragging rights. Ram may have come out with a better alternative to the Raptor, but Stellantis’ truck brand can’t be complacent. Ford has the V8 F-150 Raptor R coming in 2022, and chances are it’ll give the TRX a run for its money. Bust out your popcorn, because this upcoming Detroit battle is definitely going to be a blockbuster.