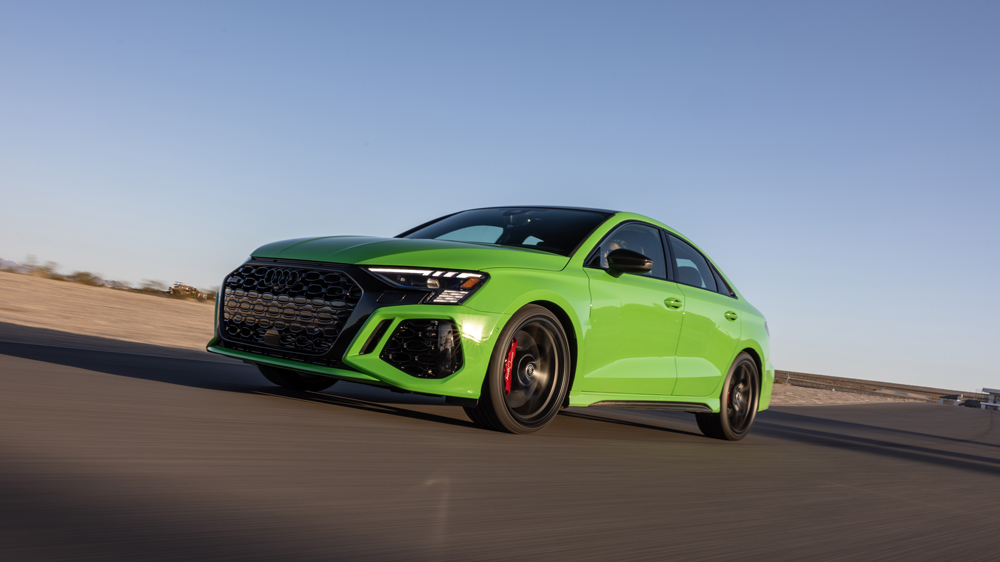 Audi’s brand-new RS 3 is a ferocious little thing. It’s as if the carmaker’s smallest sedan is possessed by the spirit of a Jack Russell Terrier—or more extreme, a Tasmanian Devil—waiting to be unleashed at the will of its driver. Docile until riled, Audi’s blistering banshee really gets up on its hind legs, capable of going toe-to-toe with just about anything made for real-world driving.

I like small cars with big personalities and power, and it’s a fact that some of the most rewarding ones to drive use the age-old hot-rodder’s formula of packing lots of engine into a small platform. It’s why compact coupes and sedans like the BMW 1M, various Mercedes-AMG C-Classes and, of course, Audi’s smaller RS models offer such unbridled fun.

Now, after a year’s hiatus, the RS 3 returns, bringing with it all the attributes of its predecessor with a bit more of everything except size. Well, actually, it’s about an inch wider and about 60 pounds heavier, but it has also got 401 hp and 369 ft lbs of torque at 3,500 rpm, an increase of 7 hp and 15 ft lbs, respectively. Notably, the North American engine puts out a few more horses than versions made for the rest of the world. The RS 3 can embarrass cars with power plants twice as large, getting from zero to 60 mph in 3.6 seconds, an improvement of 0.3 seconds over the 2020 model. Fragile egos and those desiring bragging rights may check the 180 mph track-speed option. Pay more, go faster. In fact, the model set the all-time lap record for a compact car on the Nürburgring Nordschleife, with a time of 7 minutes, 40.748 seconds. But as we’ve often noted, numbers are academic and, for the most part, irrelevant when describing the dynamic capabilities of a model like the RS 3. Forget counting, it’s so much more fun to just get in and drive.

To do that, Audi’s hospitable team invited us to Spring Mountain Raceway in Pahrump, Nev. The trip from Los Angeles and back was opulently accomplished in the new Audi S8 (a story for a future installment). That very quick blast through the deserted desert abruptly ended at the “Welcome to Pahrump” sign, after which one suffers a five-mile crawl through town at a heavily enforced 35 mph—which felt like the speed of glue—leaving time to count no fewer than a half-dozen fireworks vendors and multiple storefronts purveying firearms, cannabis and plenty of “loose” slots. But once safely inside the well-gated track and its community, we were greeted by a brightly colored RS 3 fleet in colors like Kemora Gray, Python Yellow, Turbo Blue and the model’s scorching debut hue, Kyalami Green. Our mission was to hammer the RS 3 both on the track and on a road course through the barren-but-beautiful desert highways on either edge of California and Nevada. Night drifting on the skidpad followed dinner.

It always brings me up short when, in a particular situation, a friend or stranger suddenly “reads my mind,” able to finish my thought or sentence. The Audi RS 3 can do that. Maybe it’s down to the car’s ideal balance, all-wheel-drive Quattro drivetrain or the brilliant engine that begs to be throttled within an inch of its 2.5-liter life. This mill has a rich heritage, beginning with the 1980 Audi Quattro, and is the only Audi five-banger made today, apart from the one in Audi’s TT. Its history goes back to some of the most accomplished racing cars in the Audi stable, like the 1984 Audi Rallye Quattro A2, one of the greatest Group B rally cars of all time, which was present, courtesy of our Audi hosts, Mark Dahncke and Steven Marks, who inveigled the Audi Tradition historical division to bring it and three other priceless Audi race cars from Ingolstadt to the trackside garage attached to our lodgings.

Talk about inspiration and authenticity! Rolled out of the garage, into the pits and fired up, the Rallye Quattro A2 was louder than a rented machine gun at a Las Vegas firing range. Though hugely attenuated, the RS 3 cackles with the same staccato cadence, thanks to the 1-2-4-5-3 firing order that is the turbocharged engine’s inimitable vocal signature. At higher rpm, it’s a sound no less inspiring than the song of a Ducati bevel-drive twin or a Ferrari V-12, especially through the optional RS sport exhaust system.

But an engine alone does not a great car make, and the RS 3 has plenty of other winning attributes that, together, make the whole machine greater than the sum of its parts. Audi’s seven-speed S-tronic dual-clutch transmission engages gears instantly, and has a bulletproof track record in motorsport competition. Standard RS Sport suspension with Dynamic Chassis Control (DCC) dispenses with previous Audi Magnetic Ride, and in Performance mode optimizes cornering at only a slight sacrifice of comfort. In Comfort mode, the car is a perfectly delightful highway cruiser, though a quick swipe of the central touchscreen unleashes Mr. Hyde.

A Python Yellow RS 3 with the 1984 Audi Rallye Quattro A2 racer on its heels.  Audi AG

Naturally, brakes are uprated from the four-cylinder A3 and even S3 models, with six-piston calipers clamping 14.8-inch steel discs in front. Available 15-inch ceramic fronts shed 22 pounds, look great and keep the stylish 19-inch cast aluminum wheels squeaky clean. Available 5-Y spoke wheels can be had with optional Pirelli P Zero Trofeo R motorsport tires, but you’ll have to sign a waiver to get them, as these are strictly for the track.

The track is precisely where we experienced the RS 3’s handling chops and imperturbable traction, due largely to the RS Torque Splitter. The RS 3 is the first Audi model to use the new rear end, a component that distributes drive torque for the rear axle fully variably between the left and right rear wheels. The result is improved stability, especially on wet surfaces, and agility during fast cornering in wet or dry situations. The RS Torque Splitter is fully integrated into Audi drive select, which offers five different modes, from Comfort to RS Performance—the latter designed for track use to minimize oversteer and understeer in fast cornering. RS Torque Rear mode allows for controlled drifts, aptly demonstrated at Spring Mountain with a wicked nighttime course illuminated by stadium-strength lighting.

At saner speeds, or even standing still, the RS 3 is an alluring design. Audis have always been “designers’ cars,” relatively understated and without gratuitous embellishments that can grow old fast. Which is not to say the RS 3 doesn’t have some performance-enhancing details that are quite visually appealing. Solid and sure-footed, the 2022 model is distinguished by a more aggressive stance and more sculpted panels than the previous version introduced in 2017.

The most noticeable difference is at the front, where the gloss-black honeycomb Singleframe grill—with air-gulping intakes on either side—is given a face by matrix-design LED headlamps with digital DRL, and a novel checkered-flag design that animates on startup and shutdown. The car’s demeanor is emboldened by wider fender flares at all four corners, embellished by a massive fender air vent aft of each front wheel arch.

Black is the theme inside the RS 3, and the only interior color available.  Audi AG

The semi-transparent black glass roof contrasts nicely with the paint color and conceals a sunscreen in the headliner, which should be an option for purists like this driver who despise sunroofs on performance cars. Around back, the gloss-black theme continues with a rear spoiler, RS-specific rear bumper with integrated diffusor and LED taillamps with their own novel start-up sequence. The available RS Sport exhaust system has fully variable flap control and massive, twin oval gloss-black tailpipes at either side. Incidentally, no artificial sounds are amplified within the cabin; the RS 3’s exhaust note is pure and authentic.

The interior is a businesslike place to be, and a comfortable one at that. Black is the theme inside the RS 3, and the only color available. Which is fine, especially since the eight-way, heated power front sport seats are upholstered in fine Nappa leather with RS embossing and RS-spec honeycomb stitching, which can be chosen in black, red, or Kyalami Green. Other green interior accents also add excitement to an otherwise sober design.

Infotainment is easily accomplished via the 10.1-inch, dash-mounted touchscreen, and the many driver-assistance systems that usually cost extra on other German marques are standard, including lane departure and park assist. On sale this summer, the RS 3 has a base price of $58,900. If going all-in, expect to nudge $73,000, and add a modest $3,900 for an Audi Exclusive special paint color. It’s hard to imagine getting so gratifying a car for less money . . . or even for a lot more.