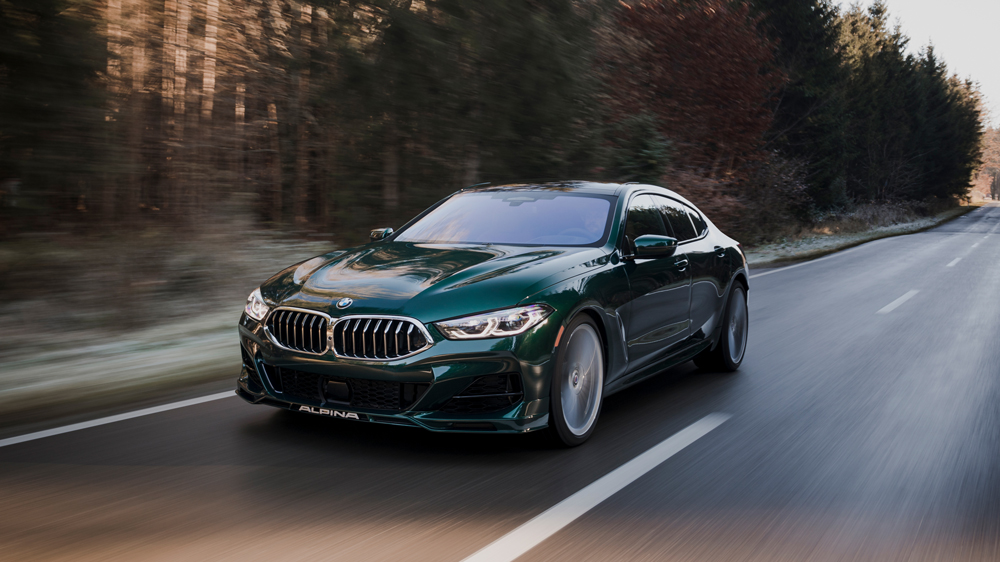 In San Francisco, the general attitude toward cars is somewhat apathetic. This may have something to do with the fact that the local tech industry has seemed intent on disrupting our relationship with the automobile, doing so by way of ubiquitous ride-sharing apps and electric scooter–sharing programs, not to mention the promise of self-driving cars and flying taxis. It has begun to affect the collective mentality. Yet cruising around the city in a green metallic 2022 BMW Alpina B8 Gran Coupé, I sense the automotive indifference of my fellow San Franciscans melting away.

First there was the fellow who reached out of his Tesla Model X to photograph the big sedan as I eased it into a parking spot; then another who screamed “Nice car!” from his passing Corolla. Even as I wind through my neighborhood with windows down—the better to enjoy the refined rumble of the B8’s custom-tuned, stainless-steel quad exhaust—a 30-something pedestrian stops in his tracks and exclaims, to no one in particular, “Dude . . . Alpina!”

The attention, in fact, is a little distracting, so I head out of town. Not long ago, in Aptos, just south of Santa Cruz, Calif., the esteemed chef David Kinch opened Mentone, a restaurant inspired by both the French and Italian Rivieras. I make that my destination, as the distance and variety of terrain encountered are perfect for getting to know the latest BMW from Buchloe.

The BMW Alpina B8’s specifications are impressive: 612 hp, 590 ft lbs of torque, a zero-to-60 mph time of 3.3 seconds and a top speed of 201 mph. But just as Alpina’s specialists are intent on maximizing power and performance, they are equally focused on engineering cars that are easy to drive and easy to live with. These traits go back to the automaker’s models of the late 1970s and early ’80s, and reflect the tastes of Alpina’s founder, Burkard Bovensiepen.

A craftsman at Alpina applies his expertise on an engine.  Katja Kuhl, courtesy of BMW.

In top gear on the 280 freeway, the B8 presents a cabin experience that is nearly silent, the car’s 4.4-liter, bi-turbo engine barely whispering at 70 mph, while the custom Pirelli P Zero rubber—equipped with Pirelli’s Noise Canceling System—keeps tire-cavity noise to a minimum. The road is empty, so I pull to the side, bump the driving mode to Sport Plus with the crystal glass iDrive controller, and test the acceleration. It’s massive and linear, punctuated by shifts that are at once decisive and quick, yet satiny smooth, and accompanied by a succession of sonorous glissandos that an operatic bass might dream of. It’s all over too quick, so I do it again. Delicious.

A crystal glass iDrive controller is just one of Alpina’s embellishments.  Roman Raetzke, courtesy of BMW.

At maximum speed, the B8 must be even more delectable. But this was no autobahn, so to sample a different kind of dynamic driving, I divert to the two-lane blacktop of Skyline Boulevard. As tractable as it is on the highway and on city streets, the B8 is a sheer delight on the roller-coaster ride of California State Route 35, the power so immediate that the engine could just as easily be naturally aspirated. And the Brembo brakes are a breeze to finesse and modulate; feeding on power and trimming it off over and over in an effortless rhythm that will make a run-of-the-mill driver feel like a virtuoso.

The 4.4-liter bi-turbo engine is responsible for 612 hp and 590 ft lbs of torque.  Roman Raetzke, courtesy of BMW.

The steering is just as impressive, the wheel—hand-finished in Alpina Lavalina leather—ideally weighted, the response direct and precise. The suspension, while supple, features Alpina-engineered enhancements that include stiffer struts, reinforced sway bars and stiffer lower-wishbone mounts, which all work to keep the B8 balanced, stable and secure in even the trickiest of curves.

As I near Aptos, I find myself thinking of the BMW M models I’ve driven, among them the M8 Competition Coupe. Although the difference between a BMW Alpina and the corresponding M model is not all that great, at least in terms of power and torque, the difference in the driving experience is quite profound. Both are enormously capable, to be sure, but whereas the M seems to be in a perpetual state of flex and itching for a contest, the Alpina version brings to mind an elite athlete with nothing to prove—serene, but with every muscle and reflex ready to respond decisively when called on.

Dining at Mentone, savoring an especially nice pizza funghi, I consider BMW’s vast performance menu and imagine ripping through the redwoods, bombing down the autobahn or cruising the Cote d’Azur. Without doubt, the Alpina B8 Gran Coupé is the selection that best sates my motoring appetite.