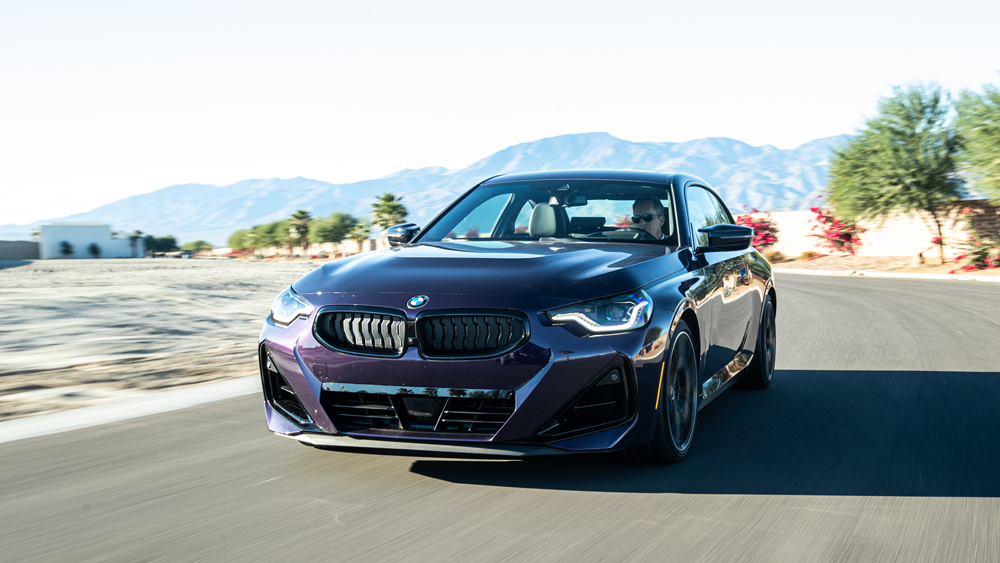 After stints hot lapping the M3 Competition, M4 Competition xDrive and M5 CS on the South Palm circuit at the Thermal Club in Thermal, Calif., I felt that the deck was decidedly stacked against the M240i xDrive, the next model I was to put through its paces. The suspension tuning was a bit softer than the others, the shove wasn’t quite as visceral, and the stopping power of the M Sport brake package wasn’t as urgent as the bigger, pricier carbon-ceramic systems on those top-tier M cars. Yet even on a fast, demanding course like this one, the M240i was not only competent, but also thoroughly entertaining. That is, with the right combination of settings.

All new for 2022, the BMW 2-Series has muscled up for its second act. In M240i specification, it’s now 3.5-inches longer, 2.6-inches wider, 0.1-inch lower and boasts front and rear tracks that are 2.5-inches and 2.4-inches wider, respectively, than the car it replaces. With a more prominent long nose, a short deck layout, bulging fender flares and a power dome hood, the car’s aesthetics alone make it clear that performance is a big part of the equation here.

It also has more grunt to back up the new look. The car carries a 3.0-liter, turbocharged inline-six engine that delivers 382 hp and 369 ft lbs of torque to all four wheels. Managing that delivery is an eight-speed automatic transmission—the sole gearbox available for the M240i xDrive. The latest model iteration not only dishes out an additional 47 hp over its predecessor, but also 17 hp and 26 ft lbs of torque more than the original M2. It’s a combination that’s good for a sprint from rest to 60 mph in 4.1 seconds, and it doesn’t stop pulling until you reach its electronically limited 155 mph top speed. But the M240i xDrive isn’t exclusively focused on setting your hair on fire, and our time on the street with the reworked machine gave us a chance to soak in our surroundings a bit more.

Aesthetics alone make it clear that performance is a big part of the equation with this model.  Photo: Courtesy of BMW.

BMW largely played it safe here, bestowing the new 2-Series with an interior that looks and feels like a shrunken-down version of the 3-Series. It’s not particularly daring, but it also leaves little to complain about. The sport seats, moonroof and M Sport Package come standard on the M240i, the latter of which adds a leather-wrapped steering wheel, cushioned knee pads on the center console and an array of M badging throughout the cabin.

Also on board is iDrive 7 with wireless Apple CarPlay and Android Auto support. The standard instrument layout consists of analog gauges with a 5.1-inch display between them, and an 8.8-inch center touchscreen. But if you spring for the $2,750 Premium Package—which also includes heated seats, a heated steering wheel, full LED lightning and a head-up display—the analog gauge cluster is replaced by a 12.3-inch digital display and the infotainment system scores a 10.25-inch touchscreen.

The latest iteration is longer, wider and slightly lower than the car it replaces.  Photo: Courtesy of BMW.

Thanks to its standard Adaptive M suspension, the M240i proved to be an agreeable steed on extended stretches of desert highway, as well as on the twistier bits we encountered. The compliant ride quality was what we needed during long hauls, and the sharpened responses were there when things got a bit more spirited. Still, we couldn’t shake the feeling that there was more to the story back at the track.

A 3.0-liter, turbocharged inline-six engine delivers 382 hp and 369 ft lbs of torque to all four wheels.  Photo: Courtesy of BMW.

A bit of context: Since the M240i lacks the M1 and M2 steering-wheel buttons of the BMW’s proper M cars (which allow you to call up an array of pre-programmed dynamic settings with a single button press), event organizers had simply set the M240i xDrive to Sport mode. And normally that’s fine. As is the case with this mode on most performance vehicles, the setting stiffens the suspension, sharpens throttle response and recalibrates the gearbox for more aggressive driving. One thing it doesn’t do, however, is loosen up the traction and stability control systems to a point that would allow most drivers to fully exploit the car’s capability. We noticed that the vehicle simply would not deliver the additional thrust we asked for when coming out of slower corners until the steering wheel was almost completely straightened out.

The M240i xDrive covers zero to 60 mph in 4.1 seconds and has an electronically limited top speed of 155 mph.  Photo: Courtesy of BMW.

There’s certainly a valid argument to be made that more precise driving technique would eliminate a lot of this, but the 2-Series has always been more about having fun than setting lap records. So after getting the nod from the powers that be, BMW sent us back out on track with Dynamic Traction Control (DTC) enabled, which basically means the stability and traction systems were set to partial-off. That might seem like a minor change, but it was transformative for the all-wheel-drive M240i, which was finally able to deliver the response we expected when we stomped on the loud pedal. And that, in turn, allowed us to noticeably elevate the pace in a number of different sections of the course.

With the $2,750 Premium Package, the analog gauge cluster is replaced by a 12.3-inch digital display, while the infotainment system scores a 10.25-inch touchscreen.  Photo: Courtesy of BMW.

The rear-bias design of the xDrive system also became evident when we exceeded the limits of grip offered by Pirelli P Zero rubber, which resulted in predictable, easily managed oversteer similar to what we had experienced in the M4 Competition xDrive when we put that feisty coupe in MDM mode (ostensibly the M cars’ version of DTC) earlier in the day.

Of course, we’d be disingenuous if we claimed that the faster, more sophisticated and significantly costlier M4 wasn’t the superior tool for the job. But that didn’t stop us from grinning wide as we brought the M240i xDrive back into pit lane.