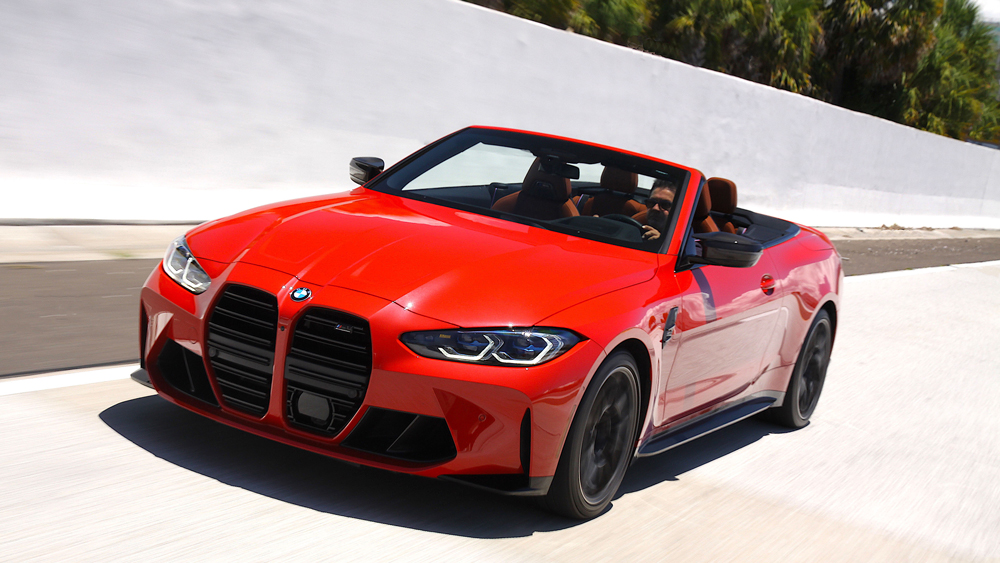 In the world of endangered species, the highly strung, high-performance four-seat drop-top is right up there with white rhinos and snow leopards as far as car enthusiasts are concerned. This makes BMW‘s latest 503 hp M4 Competition xDrive Convertible all the more covetable.

The model variant is a rather rare beast. Only available in hardcore Competition spec, and only with the xDrive all-wheel-drive configuration and eight-speed automatic transmission (there’s no manual, so don’t ask), this M car will be offered in teeny numbers. Considering all of that, and after spending time behind the wheel, we found the $87,495 asking price to be nothing short of a bargain.

The fact that it’s a convertible just adds to the allure. Toggling a switch on the center console triggers a choreographed ballet of panels, hinges and fabric that sees the roof retract in a mere 18 seconds, and at speeds up to 31 mph. Top down makes it all the better for hearing the tailpipe symphony that erupts from the wonderfully vocal 3.0-liter, twin-turbo straight-six mill as it slingshots the car from standstill to 60 mph in 3.6 seconds. Top speed? A follicle-ruffling 155 mph.

Yes, there was a previous M4 Convertible. But that version had a top-heavy metal roof that added weight and complexity while eating valuable trunk space. This iteration features a tight-fitting cloth roof that’s 40 percent lighter, looks sleeker and only sacrifices 3 cubic feet of the 13.6 cubic feet of trunk space when folded. Pity, however, that the roof only comes in two shades of black.

Settle into the well-bolstered and endlessly adjustable driver’s seat, with its illuminated M4 badge inset into the headrest, then press that racy-red start button and hear the six cylinders exhale through a quartet of tailpipes. This is one of the world’s great engines—silky-smooth, eager to rev, properly potent with its 479 ft lbs of torque and truly sonorous in its soundtrack. And off the line it delivers fearsomely rapid acceleration, spinning enthusiastically to its 7,200 rpm red line.

That power is channeled to all four wheels through a ZF-sourced eight-speed automatic that’s so intuitive and eager to shift, it makes the lovely carbon-fiber paddle shifters almost redundant. A manual shifter wouldn’t keep up. The motorsport-inspired M division’s DNA shows through loud and clear when you fire the roadster down a twisty backroad. The standard, rear-biased xDrive all-wheel drive adds an infusion of poise, balance and true agility to the handling.

Having coupled this with surgically precise and perfectly weighted steering, adaptive M suspension and sticky 19-inch front tires paired with 20-inch rubber at the back, the ragtop seems to lose little to its stiffer M4 Competition Coupe sibling. There’s also a multitude of drive settings to fine-tune engine and dynamic functions, yet we found most to be confusing and, frankly, overwhelming. Track hounds might have fun experimenting with the three engine-response modes, three suspension settings, three levels of stability control, six transmission-shift modes, adjustments for steering and nuances to exhaust sound. But for fast, focused road driving, Sport mode works just fine. As you’d expect, the ride is certainly on the firm side—and that includes the cushier Comfort mode. But plenty of body strengthening has dialed out any shake and shimmy, even over the most gnarly of surfaces.

Top down, sun on your face and wind in your hair makes the cockpit of this new M Convertible a lovely place to be. Admittedly, there’s a small gale that swirls around the cabin at speeds over 60 mph. Raising all four windows helps. But with the top raised, there’s hardly a rustle of wind noise, so good is the sealing. And while no one would call this new M a full four-seater, it does have a rear passenger area that is fine for kids, or for ferrying adults on short jaunts to a restaurant or the beach. Getting back there with the top raised, however, is only for contortionists.

Press that racy-red start button and hear the six cylinders exhale through a quartet of tailpipes.  Howard Walker

As of now, the M4 Competition xDrive Convertible has little in the way of actual competition. The sad departure of Mercedes-AMG’s thundering C63—with its twin-turbo V-8—and the lack of an RS5 Cabriolet from Audi leaves only Porsche’s pricier 911 Cabriolet and, perhaps, the Lexus LC 500 as alternatives. In our opinion, though, no alternatives are necessary. Here is arguably the best all-round performance convertible out there under six figures.