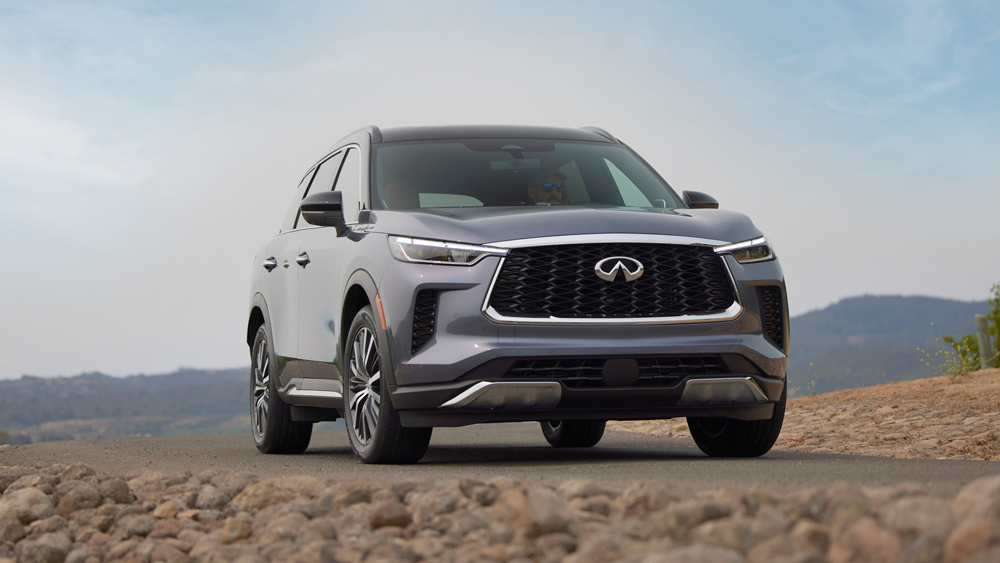 Once upon a time, Infiniti was renowned for building cars that put more than a few legacy automakers on notice. Models like the original Q45 and the G35 were industry benchmarks for driving enjoyment and, while not perfect, felt special and grabbed defectors from coveted German luxury brands.

Over the past decade, though, Infiniti has felt sleepy, like it’s been striving for adequacy rather than greatness. The outgoing QX60 seems to corroborate this notion. Despite being just an average player in its segment, the midsize crossover SUV was Infiniti’s most popular model last year and, historically, has sold competitively against chief competition like the Acura MDX and Volvo XC90. It’s troublesome, however, to consider how long a luxury brand can survive by leaning on what suffices. In other words, Infiniti needs a hit. Is the 2022 QX60 the ticket? Well, it certainly looks that way.

Both inside and out, the 2022 model is drastically improved from the 2020 iteration, as was obvious when we first saw it back in June. That introduction piqued our curiosity. Could this crossover SUV drive as well as it looks?

As a refresher, the outgoing model was as dynamic as a wet blanket. In May of last year, we spent a week with the 2020 QX60, and while it felt agile enough for motoring quickly about town, on a sinuous mountain road, the SUV felt awkward—the nude-while-public-speaking type of awkward. You’d think the abject absence of sporty handling would mean creaminess at a saunter, but the old QX60 offered only average ride quality.

After only 30 seconds in the 2022 model, we were blindsided by the night-and-day difference. Starting at $46,850, the new QX60 offers an impressive ride/handling balance that approaches that of the lofty BMW X5. A touch more attenuation of smaller road imperfections would place the Infiniti at parity with the Bimmer, but considering the Bavarian’s much higher $59,400 entry price, we’re still impressed.

The 2022 example we tested felt more planted and nimble than past iterations.  Photo by Patrick Daly, courtesy of Infiniti.

The QX60 can handle the twisty stuff, too. Charging into the bends around Goat Rock Beach in Northern California’s Sonoma County, the new QX60 feels planted and nimble, even with the moderate body roll expected. What’s most surprising, though, is the steering. Over the past few years, Infiniti has been introducing new models with anywhere from poor to forgettable electric steering. The QX60 bucks that trend by now featuring one of the better systems out there. During our testing, the steering effort feels on point in the Standard drive mode, and firms up nicely in Sport mode. The steering rack is 6 percent quicker this year, and even offers a hint of feedback through the wheel. Brake feel was never an issue with the previous QX60, and the same holds true for 2022. The pedal is firm and communicative for confident stopping.

Power still comes from a 3.5-liter V-6 making 295 hp and 270 ft lbs of torque, but instead of a continuously variable transmission (CVT), power is now routed to the front, or all four wheels via a nine-speed automatic transmission. We never had a problem with the 2020’s CVT, but the new torque-converter automatic does a better job of leveraging the V-6’s power and twist thanks to a wider ratio spread. Infiniti says its “low first gear delivers 60 percent more driving force than its predecessor.” In practice, the new QX60 really jumps off the line, and is more alert at all speeds.

As the miles continue to roll by during our loop around the Napa Valley and Sonoma Coast, the massaging front seats equipped on our loaded, all-wheel-drive, Autograph-spec QX60 (starting at $63,250), keep us feeling fresh, as does the ventilated front chairs. The QX60’s cabin is a comfortable and quiet place to spend time—quieter than ever now, thanks to about 35 pounds of additional acoustic-dampening material.

When it comes to sound, however, what comes through loud and clear is the new 17-speaker Bose Performance Series audio system, an upgrade from the previous 15-speaker Bose setup. But it’s not all good news for audiophiles. To maximize under-floor cargo space, Infiniti moved the subwoofers from the spare tire nook to behind the cargo area’s rear panels. As a result, the bass is less punchy, although most folks would likely choose the extra space if given the choice.

Many will also appreciate the QX60’s smoother-operating ProPilot Assist lane-centering adaptive cruise control. Now linked to the available navigation system, the semi-autonomous array can slow the crossover for bends and off-ramps. And we love how ProPilot Assist with Navi Link is minimally invasive, slowing the vehicle just slightly in the bends. Similar competitive systems scrub speed so aggressively in turns that motorists following behind may display a certain finger in displeasure.

Also impressive is the QX60’s traffic sign recognition. When it detects a change in the posted speed limit, a notification will pop up in the 10.8-inch head-up display asking if you want the vehicle to adjust its speed to satisfy the legal limit. How heartening is that? The robots may be taking over, but at least they’re asking permission first.

The 2022 Infiniti QX60 feels like a sign that the brand is turning a corner. This new, well-rounded QX goes beyond being just a major improvement over the outgoing model, it’s a crossover that buyers now truly have reasons to get excited about. People are going to want the latest version because it looks great, it’s fun to drive and it’s still a competent family hauler.

On par with its competition once again, this Infiniti knocks it out of the park. And if the marque is infusing passion into what’s arguably its most practical model, what could that mean for the brand’s enthusiast-oriented cars, not to mention the entire future lineup? Acura, Volvo and even the Germans may need to worry.