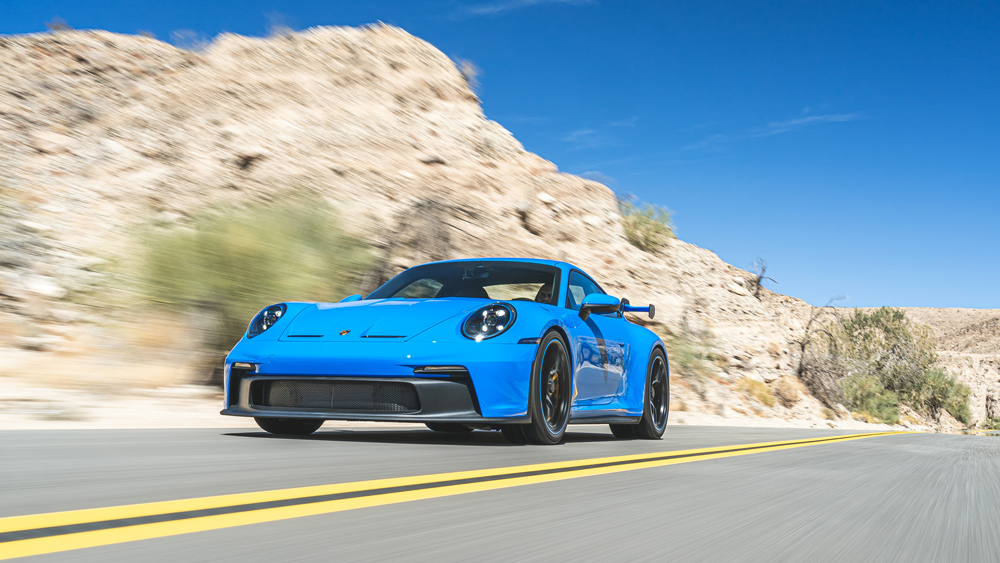 The landmark film Chinatown features some quotable conversations between complex, colorful characters. Over lunch, private detective Jake Gittes asks wealthy villain Noah Cross about the purpose of the land baron’s vast fortune. “How much are you worth? How much better can you eat? What could you buy that you can’t already afford?” To which the greedy old geezer replies, “The future, Mr. Gittes! The future.”

The 2022 Porsche 911 GT3 buys you a glimpse of the future—of sports cars, at least—with the most talked-about new 911 since the 911 R. The GT3 is, like those characters in Chinatown, colorful. Porsche enthusiasts have been eagerly anticipating this latest GT3 from the time the 991.2 series was replaced by the 992 in 2019. Meanwhile, the GT3 variant based on the previous platform continued to be made through 2020, satiating the appetites of the most ravenous Porschephiles. But like Noah Cross, they wanted more.

Porsche paleontologists who dig into the 911 fossil record can trace the DNA of the GT3 to the 1973 911 Carrera RS 2.7, a limited run made in Touring and Sport configuration to homologate a lightweight 911 for competition. The intervening years saw some Club Sport and other RS models, but the GT3—developed for Cup Grand Touring—only came on the scene in 1999 with the 996.1 series, which happened to be the very first water-cooled 911 production model. Since that time, the high-revving, naturally aspirated GT3 has been on the wish-list of most enthusiasts, and for reasons that become abundantly clear the minute one gets behind the wheel.

I met the new 911 GT3 in an unmarked location in Glendale, Calif., not too far from Angeles Crest Highway, the quintessential driving road that snakes uphill through some exquisite mountain landscape, east of Pasadena, toward snow-dusted Wrightwood. Porsche North America’s 911 expert Luke Vandezande delivered a detailed download on Porsche’s finned and spoilered predator, appositely painted Shark Blue, the official model-release color and a $4,220 option. Paint-to-Sample (PTS) nerds will squint their eyes and imagine an unholy marriage of Mexico Blue and Voodoo Blue. Non-metallic and not for the faint of heart, this new hue paints a bold way forward, though most buyers will likely take the easy way out with silver, gray, white or another non-color. I call that a wasted opportunity. True PTS is available, if the stars align and Porsche is in the mood, for $12,830.

The official model-release color, Shark Blue, is a $4,220 option.  Photo by Robert Ross.

During our walk-around, Vandezande elucidated some of the things that make the new 992-series GT3 special. From a distance, the GT3 bears a resemblance to the previous model, but surprises reveal themselves when you get within ten feet. A quick glance shows the new GT3 to be fractionally longer, taller and, with a front track of 63 inches, wider than the 991.2 version it replaces. Impressively, at 3,164 pounds for the PDK-transmission version, and 3,126 pounds for the manual, it weighs about the same as its predecessor, with lighter glass, exhaust, battery, brakes and wheels, and greater use of composites.

For example, the lithium battery saves roughly 22 pounds compared to the battery in the previous 911 GT3, while thanks to metallurgy and soldering techniques, the new sport exhaust shaves off another 22 pounds. Lighter center-lock wheels feature thinner and more angular spokes than the previous design. Front 20-inch wheels are a half-inch wider at 9.5 inches, while the rears are now 21 inches in diameter and a whopping 12 inches wide. Going on the hunt for unwanted pounds results in a weight-to-power ratio of 6.23 pounds per hp for the manual-transmission model.

Power, of course, is delivered only to the rear wheels.  Photo: Courtesy of Porsche AG.

To admit that the extreme capabilities of the new GT3 are wasted on this driver is not entirely true, for anyone can appreciate the technical advancements that underpin this car’s performance. But to fully exploit the GT3 on road or track is to require skills greater than most drivers—myself included—possess. That makes me feel good. It’s almost like buying a leisure suit that one can grow into, instead of out-grow. Stretch your waistline—or your driving chops—and the GT3 is there to accommodate your increased capacity. The GT3 never shames you for not coming up to its standards, just like my patient German language instructor.

According to Porsche GT head Andreas Preuninger, “We were entering a field of diminishing returns with regard to engine development, especially in Europe. So we had to look at other performance-relevant fields of engineering.” In essence, his team had to re-engineer the whole car, getting more performance with about the same power. That meant more aero, more contact patch and more weight-saving measures at every turn. The result is greatly improved aerodynamics, adapted from the 911 RSR Le Mans race car.

Apparent from the heavily revised front and rear ends, the upper body and underbody enhancements provide greater downforce and better airflow, and make the GT3 look more purposeful than ever, especially with the twin nostrils in the leading edge of the carbon-fiber-reinforced plastic (CFRP) frunk-lid. The CFRP rear wing can’t help but attract attention—unwanted or otherwise—due to its size alone. Novel and effective are the “swan-neck” uprights supporting the big slab that also allow air to flow more freely under it. The result from that, and other embellishments, is bodywork that creates 50 percent more downforce than its predecessor when the wing is in the standard aerodynamic setting. In the wing’s track-only performance position, the downforce can increase by as much as 150 percent at a speed of 125 mph.

Along with other aero embellishments, the rear wing adds to a total of 50 percent more downforce when in the standard aerodynamic setting.  Photo: Courtesy of Porsche AG.

The engine room in the back is where the power gets dished out from a 4.0-liter flat-six that takes deep, naturally aspirated breaths and makes 502 hp at 8,400 rpm. Most closely related to the previous 911 Speedster engine, it’s the only non-turbocharged boxer in the 911 lineup. Entirely different from that made with the engines in Carrera and Turbo models, the sound is intoxicating as the revs instantly build to a 9,000 rpm redline, accompanied by 346 ft lbs of torque at 6,100 rpm. The intake of the motorsport-derived engine uses six individual throttle bodies, while the dry-sump lubrication system uses a composite oil tank that is lighter than the aluminum unit in the previous GT3.

The big news is the front suspension, that, like the aerodynamics, is adapted from the Le Mans–winning 911 RSR. Complex and costly to implement, it’s a double-wishbone with anti-roll bar design that replaces the tried-and-true MacPherson spring strut setup of previous street 911s, which Preuninger says, was “maxed out” in its development for the GT3. Though it seems impossible, the new suspension offers even more precise handling than the 991.2 GT3, with predictable cornering, uncompromised by irregular road surfaces. Most memorable is how stable the car is over bumps, though residual comfort is outstanding, and even better than the outgoing model.

The new GT3 is fractionally longer, taller and wider than its predecessor.  Photo: Courtesy of Porsche AG.

The finesse and feedback of the electromechanical power steering remains a parlor trick that Porsche performs so well. Power, of course, is delivered only to the rear wheels, the suspension for which is Porsche’s multi-link rear axle with anti-roll bar setup. Rear-axle steering, as on the previous GT3, virtually shortens the wheelbase for greater agility. Porsche Torque Vectoring Plus (PTV+) varies torque distribution to the rear wheels, making the GT3 an even more sure-footed accomplice on Angeles Crest Highway.

The three hours spent driving the near-empty road on a weekday morning was a reminder that, when the coast is clear and the pavement is dry, it may be one of the best stretches of pavement on the planet. With plenty of sweeping curves and long, open straights, it was an opportunity to give the GT3 a chance to stretch its legs and explore the redline—at least up to third gear—which is accompanied by the most visceral intake and exhaust sounds this side of a Ducati bevel-drive twin.

The rear wing is supported by novel and effective “swan-neck” uprights.  Photo: Courtesy of Porsche AG.

Speed evaporates with the Porsche Carbon Ceramic Brakes (PCCB), a $9,210 option, and while the standard-equipment cast-iron rotors offer a more practical and cost-effective solution for regular track users, the ceramics are stellar performers whose composition produces no brake dust and keeps wheels clean. About the only option that should be considered essential, however, is the $3,670 front axle lift system, which raises the low front end about 1.5 inches at the push of a button and features GPS-enabled memory to take the worry out of negotiating regularly encountered driveways and road impediments.

The 992-style interior takes a little getting used to for those accustomed to previous 911s. The flat dash surfaces create a wide expanse and the all-digital instrumentation—except for the central analog tachometer—is a departure from the 911’s five-dial tradition. Thoughtfully, a track screen reduces the digital displays left and right of the center tach for spirited driving.

Carbon-fiber trim is optionally available to dress things up. A first for a Porsche GT car is the multifunction sports steering wheel with a mode switch on the right that lets drivers dial in performance, going from Normal to Sport to Track. Thankfully, drivers who opt for the PDK transmission will note that a real gearshift-like lever replaces the Braun-electric-razor-of-a-nub that serves as a console shift on 911 Carrera and Turbo models. GT3 buyers get three seating choices and no seats for kiddies in the rear. The four-way Sport Seats Plus w/ Race-Tex inserts are standard, and optionally, 18-way sport or full bucket seats are available. Made of carbon fiber, the full buckets are a worthwhile $5,900 upgrade, and save 26 pounds compared to the standard seats. The buckets are my choice for weekends and occasional drives; owners pressing a GT3 into daily service (are there any?) would wisely opt for the greater comfort of 4- or 18-way chairs.

Regardless of the seats one chooses, the real purpose of the 911 GT3 is pushing Porsche GT cars forward. While the PDK version gets from zero to 60 mph in 3.2 seconds, its Nürburgring Nordschleife time of 6:59-and-a-hair—17 seconds quicker than its predecessor—tells the performance story best of all.

So there remains one more choice that any potential buyer will need to make, namely, to decide between the seven-speed dual clutch transmission (PDK) or the six-speed manual. Both are priced the same. While the manual is 37 pounds lighter than the PDK, it’s not as quick, taking an extra half-second to reach 60 mph. Top speed—academic really—is 197 mph and 198 mph with the manual and PDK transmissions, respectively. What’s not academic is that drivers who plan to use their GT3 on the track, or in rush-hour traffic for that matter, will likely opt for the PDK. It delivers sumptuous, sure, supersonic-fast shifts, and in Auto mode, lets the driver concentrate on the road and not the gearbox.

Our Porsche hosts didn’t have the manual to compare with the PDK, but based on experience with my 2018 GT3 Touring, the manual transmission, with its Auto Blip rev-matching feature and short-throw shifter, is the most emotional and entertaining way to enjoy a GT3. But then, I don’t track my car. When asked about the stick-shift vs. PDK take rate, Preuninger acknowledged that “America likes manuals. People like manual transmissions for a reason. I would take a manual, maybe.”