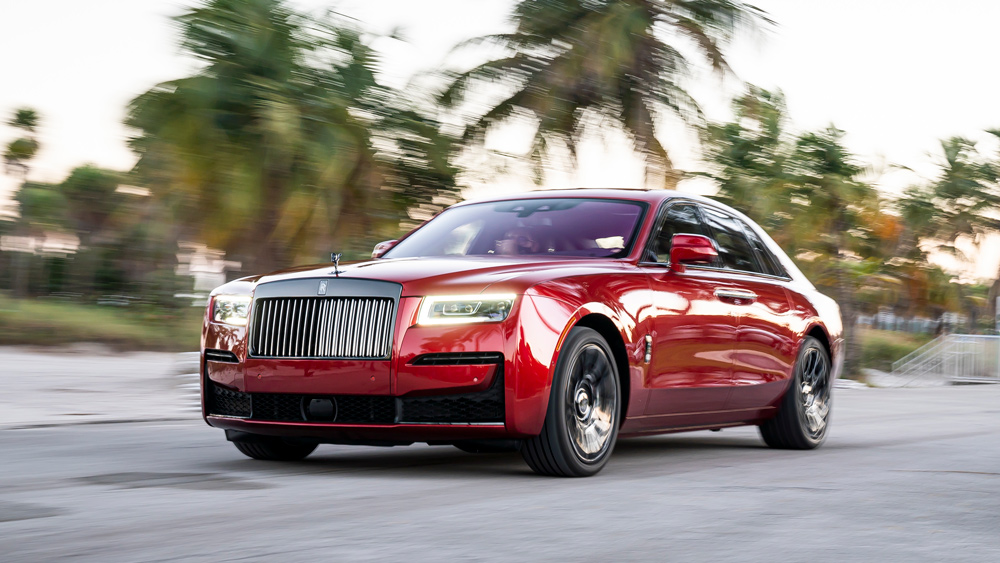 The Florida police officer turns and peers ahead, then looks back and gives me the thumbs-up. I stomp the throttle and the nearly 5,490-pound sedan I’m piloting responds like a locomotive with jet turbines, the soft growl of its exhaust note keening higher as I ride the wave of acceleration. This dragstrip-style launch is not to test an Italian supercar but rather a stately British four-door, the 2022 Rolls-Royce Black Badge Ghost, just hours after its global debut in Miami.

Rolls-Royce introduced its Black Badge treatment in 2016 to attract a younger clientele, and its done just that, according to Torsten Müller-Ötvös, CEO of Rolls-Royce Motor Cars, who says that the average age of the brand’s customer base has lowered from 57 to 43, and that 27 percent of Rolls orders are for Black Badge versions across the lineup. Müller-Ötvös calls the option a “darker, menacing image of Rolls-Royce, that alter ego.”

Now applied to the completely revised standard Ghost, Robb Report’s Luxury Car of the Year for 2021, that upgrade enhances the base model’s already spirited ride. Built on the Ghost’s same aluminum spaceframe platform, the new variant, starting at $395,000, also shares that car’s 6.75-liter twin-turbo V-12, though cloaked in Black Badge guise it delivers 591 hp and 664 ft lbs of torque—an increase of 28 hp and 37 ft lbs, respectively—allowing zero-to-60 mph coverage in 4.5 seconds, which is 0.3 seconds faster than before.

Although the same 6.75-liter twin-turbo V-12 as in the standard ghost, the engine now makes 591 hp and 664 ft lbs of torque.  Photo: Courtesy of Rolls-Royce Motor Cars.

“It’s not just about painting every part black,” Müller-Ötvös tells Robb Report. “It’s very much about how the drivetrain feels, how the steering feels, how precise the car maneuvers around corners—everything.” And while testing is currently underway on the company’s first fully battery-powered offering, Spectre, he assures that the Black Badge ethos will continue when the entire line is electrified by 2030.

Performance is further souped up by the package’s exclusive Low mode, a setting that unleashes full torque at only 1,700 rpm and cuts shift time by half when the pedal is at least 90 percent deployed. (The Ghost’s eight-speed automatic transmission, you may have heard, is aided by satellite to better shift according to road conditions.) The added thrust and athleticism is appreciated even after exiting the closed course at Key Biscayne’s Crandon Park, with the sedan able to jockey deftly around the rush-hour gauntlet and a slew of construction. Given the car’s mass, it’s deceptively agile thanks to its modified all-wheel drive, four-wheel steering (for a shortened turning radius) and larger air springs on the wafting planar suspension. Each system is tailored to the vehicle’s more aggressive performance capabilities.

The posh yet uncluttered aesthetic—a fairly new look dubbed “post opulent” by the automaker—is defined inside by obsidian-like Bolivar wood paired with composite veneers and shaded brightwork. Outside, the iconic Spirit of Ecstasy hood ornament and striking Pantheon Grille, both blackened with a chrome electrolyte, are complemented by formidable 21-inch wheels, each comprised of 22 layers of carbon fiber.

The iconic Spirit of Ecstasy hood ornament and striking Pantheon Grille are both blackened with a chrome electrolyte.  Photo: Courtesy of Rolls-Royce Motor Cars.

Crossing Rickenbacker Causeway after sunset, the celestial headliner seems an extension of the skyline’s myriad lights; the car becomes the night. Fittingly, the haunting opening to Shakira’s “Don’t Wait Up” flows from the 1,300-watt sound system, a message that’s sure to be every Black Badge Ghost owner’s sentiment when behind the wheel.