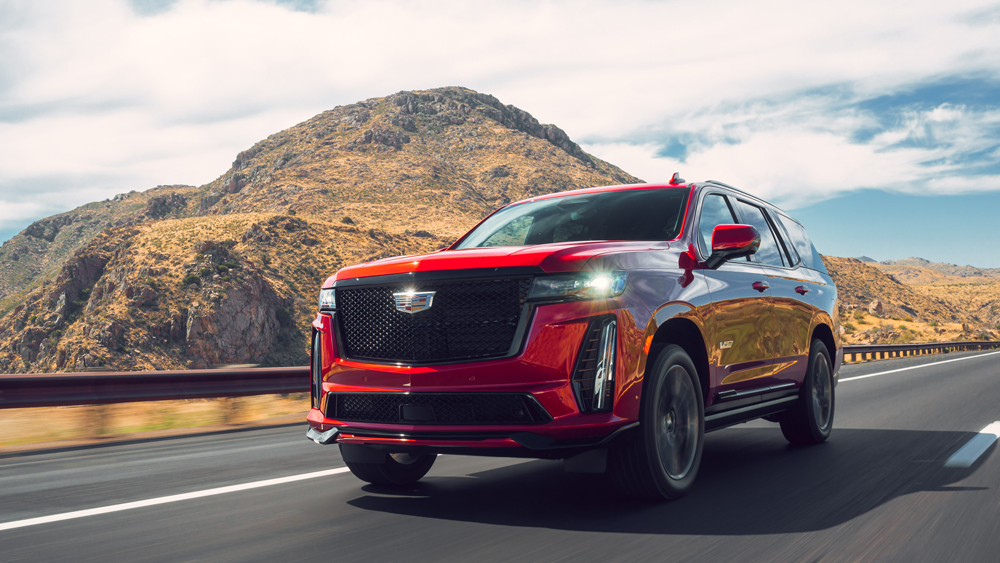 Back in the early aughts, Cadillac decided it was time for a makeover. Eager to shed its reputation as the go-to luxury choice for Palm Desert retirees, the automaker wanted to target younger buyers that were gravitating toward European marques like BMW and Mercedes-Benz. A key part of this effort included the creation of the V-Series, a performance-focused skunkworks within the brand, not unlike BMW’s M division and Mercedes-Benz’s AMG.

Cadillac has developed some seriously potent V-Series cars over the past two decades—the second-generation CTS-V, which set a Nürburgring lap record, and the venerated CT5-V Blackwing being particularly notable highlights—but strangely, the brand’s most recognizable model has never been given the V-Series treatment. Until now, that is.

Available in both standard and ESV long-wheelbase configurations, the Escalade-V packs a supercharged 6.2-liter V-8 with the same engine block and forged rotating assembly that you’d find in the engine bay of the CT5-V Blackwing, but with an even bigger 2.65-liter blower from the seven-generation Corvette ZR1 parts bin. The result is an output of 682 hp and 653 ft lbs of torque, which bests the naturally aspirated V-8 in the standard Escalade by 262 hp and 193 ft lbs of torque. It also makes this the most powerful Cadillac ever produced, and what the brand is touting as the most powerful full-size SUV that money can currently buy.

With the aid of standard all-wheel drive and a quick-shifting ten-speed automatic transmission, this 6,200-pound SUV catapults from zero to 60 mph in less than 4.5 seconds. But as impressive as that is for a vehicle of this size, the Escalade-V’s modestly bolstered seats and unremarkable top speed of 125 mph reveal a greater truth: Despite the outrageous output, luxury remains the primary focus here.

Of course, Cadillac didn’t just shove a ballistic missile into the Escalade’s engine bay and call it a day. To help wrangle all of the newfound motivation, engineers revised both the Magnetic Ride Control adaptive dampers and the air suspension, outfitting the latter with stiffer rear springs to help corral body motions while an electronically controlled limited-slip rear differential ensures that the grunt gets put to good use. Stopping power is also enhanced by six-piston Brembo calipers that clamp down on 16-inch discs up front. What’s odd, however, is that the same all-season rubber found on the standard Escalade is the only option Cadillac makes available for its most potent variant.

The Escalade-V is also outfitted with unique front and rear fascias to help it look the part, along with exclusive 22-inch wheels, a quad-tipped dual-exhaust system and signature “V” badging on the front doors and cargo hatch. While these tweaks do amp up the visual aggression a bit, the aesthetic treatment is pretty subtle and gives off sleeper vibes rather than overt performance intent.

It’s largely business as usual inside as well, where exclusive semi-aniline leather upholstery is the main differentiator between the Escalade-V and a well-appointed garden-variety Escalade. That’s not necessarily a bad thing, though—the cabin is eminently comfortable, thoughtfully laid out and comes loaded straight out of the gate for V-Series duty. The Escalade’s curved OLED displays for the digital-gauge cluster and infotainment system dominate the proceedings and provide a tech-focused look, although some of the switchgear does feel a bit down-market for a vehicle with a price tag approaching $150,000.

A press of the ignition button will remind you where that money went, though. The V-8 springs to life with an authoritative growl—virtually identical to a seventh-generation Corvette Z06—and settles down to a loping rumble thanks to the active exhaust system. The soundtrack readies your expectations for a stiff, sports-car-like ride, but around town, the Escalade-V dutifully soaks up road imperfections with zero drama. Even with V-Mode enabled— which stiffens the suspension, tightens the steering, opens up the exhaust valves and dials in the gearbox for a more urgent response—the ride quality remains outright supple by performance-vehicle standards.

Yet out on the winding canyon roads of Southern California’s Angeles National Forest, that soft tuning paired with all-season tires results in handling that’s simply outclassed by full-size performance SUVs like the Mercedes-AMG GLS 63 and the BMW Alpina XB7, both of which also out-accelerate the Cadillac in the sprint to 60 mph and have significantly higher top speeds. The Escalade-V certainly has the hustle and stopping power to keep things interesting in the hills, but low grip and significant amounts of body roll equate to an SUV that seems more at home eating up miles on the highway.

So, when we had the opportunity to take a three-hour drive out to Coachella Valley from our home base in central Los Angeles, that’s exactly what we did. Although our tester was not equipped with Super Cruise, Cadillac’s advanced driver assistance technology, adaptive cruise control and Lane Keep Assist proved useful during some of the more mundane sections of the trek. With the 36-speaker AKG audio system cranked, the massage seats working out the kinks and the noise of the outside world effectively blotted out, it’s very much the experience you’d expect from a well-appointed Escalade; and you’re reminded that this is something special when you dip into the throttle to overtake slower traffic with, well, V-Series ease.

The 2023 Escalade-V is Cadillac’s first foray into producing a V-Series sport utility vehicle, and while it proves to be more bark than bite in some respects, the charm of such an over-the-top machine is undeniable. While Cadillac has stated that this will be a limited-production model, the automaker hasn’t said how many it will produce or how long the run will last. Considering the variant’s copious thirst at the pump and the current industry-wide push toward electrification, this temporary benchmark for the brand will likely be a supercharged sidenote soon enough.

Click here for more photos of the 2023 Cadillac Escalade-V.