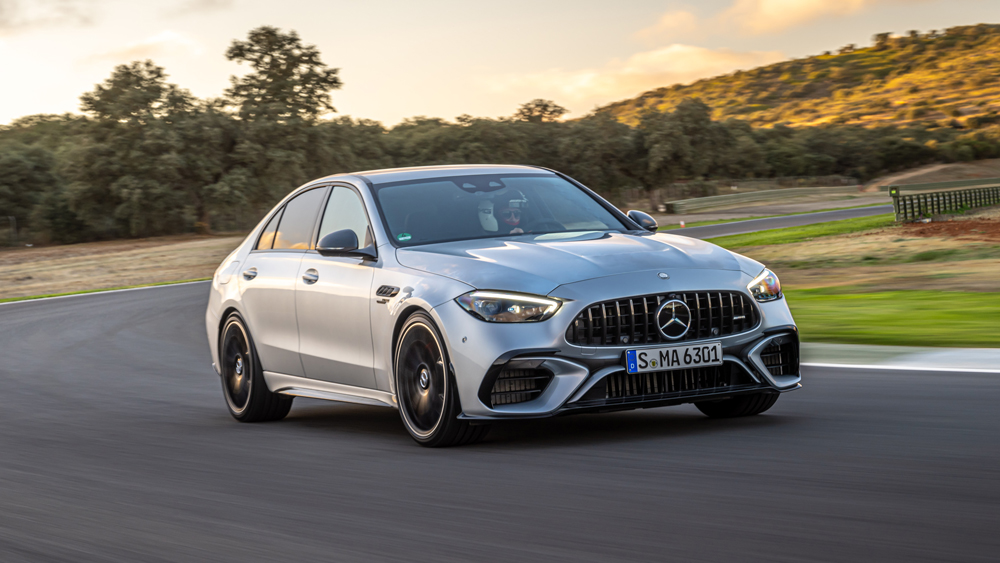 Mercedes-AMG’s vaunted C63 supercar bloodline embodies the paradoxical evolution of modern power-train dynamics. In the 21st century, some of these automotive elements have improved, such as total output and rate of acceleration, while others, like displacement and analog tactility, seem to whither— and along the way, the heartstrings of gearheads everywhere are wrenched.

Consider the first-gen C63 from 2008, with the same mill as that of AMG’s flagship SLS supercar. The first engine designed entirely by AMG from the ground up, the “M156” 6.2-liter V-8 was, at the time, the most powerful production V-8 ever made, at least among those that weren’t boosted. It transformed the C63 into the closest thing the Germans had yet developed to a swaggering American muscle car, with all 451 horses channeled straight to the rear wheels. Unbridled lunacy awaited.

To date, it’s the last naturally aspirated V-8 that Mercedes has produced. In 2015, when the second generation of the C63 ceded its engine bay to AMG’s latest ode of V-8 wonderment, reaction was bittersweet. Enthusiasts bemoaned the 4.0-liter power plant’s lost displacement, while praising the twin-turbocharged V-8’s swollen output: up to 510 hp, which allowed the car to cover zero to 60 mph in 3.9 seconds.

For 2024, Mercedes-AMG takes another similar leap—one it recently showed off in Málaga, Spain. Both at the Circuito Ascari racecourse and the surrounding hills of Andalusia, the team from Affalterbach unleashed the latest generation C63 S E Performance.

Wandering the ad hoc launch headquarters, which was outfitted with a dissected full-size power train, tech bits scattered throughout and mountains of Jamón ibérico—various execs frequently uttered the descriptor “game changer” in reference to the four-cylinder hybrid setup. And while it’s a generally abused term at automotive launches, AMG is normally not one to embellish. The new power train is truly a game changer, incorporating next-level Formula 1 technology, which the Mercedes-AMG Petronas F1 team collected over the past decade as it stacked Grand Prix wins, Constructor Championships and Driver Championships.

Of course, there have been many other hybrid Mercs in recent years, but none boast the robust architecture, innovative technology and overall electrification chops that are all presented in the new E Performance trim for the C63 S. The 2.0-liter turbo-four, pulled from the AMG A 45 and CLA 45, packs its own superb tech (like being among the first engines to feature electrically boosted turbochargers), but its 400-volt hybrid system is what takes the E Performance to the next level. The rear axle–mounted electric motor not only eliminates all turbo lag via its instant torque, it also contributes up to 201 hp for a total of 670 hp (though this apex is only available in 10-second bursts).

That’s a considerable leap from the predecessor’s 510 hp, as is its zero-to-60 mph time that has been trimmed to 3.3 seconds. These are significant performance improvements. Add the 6.1-kwh battery’s ability to offer up to eight miles of all-electric driving and you can see why the term “game changer” fits.

About the only two negative consequences of this hybrid optimization are weight and sound. Admittedly, both are important—the first for track days, the latter for simple joie de vivre. The 2024 C63 S E Performance is 780 pounds heavier compared to the outgoing model—mostly due to the battery and electric differential. This looks like a lot of weight on paper, but because of the explosive boost and steady handling, you don’t really feel it—especially on open roads. Even creasing the switchbacks high over Málaga, the C63 S E Performance feels as agile as any previous C63, especially with its rear axle–steering that tightens the turning angles even further.

For committed internal-combustion enthusiasts, the soundtrack is where they’ll lay their gripes. Fair enough. AMG engineers crafted an engine that sounds very nice, especially for a four-banger, and the C63 S E Performance also amplifies engine noises via the speakers, so passion lives in the AMG cabin. It’s just that no amount of header/flap/speaker manipulation can ever compete with the euphonic vibrations of a fire-breathing V-8, especially when you consider the naturally aspirated 6.2-liter from the first generation.

On the track, the car is terrifyingly fast, with surprising grip. As we chase five-time DTM Champion Bernd Schneider around the course’s 3.37 miles, the sedan exhibits powerful acceleration, amplified even more when the kick-down is pushed, engaging an extra 10-second boost that sends the C63 howling down straights. Unless you’re an ex-DTM champion, the C63 S E Performance will likely never leave you lacking in the power department, and its top speed is 174 mph. It also has a stump-pulling 752 ft lbs of torque. All of that needs to be underscored when discussing a power train rooted in a four-cylinder configuration. My, how far we’ve come.

Being a top-of-the-line AMG, this model variant’s interior doesn’t disappoint. Large dual screens brightly display information with an intuitive interface and Mercedes-Benz’s superb AR-enhanced navigation. Also available is a litany of customization options, including eight driving modes and four brake-regeneration levels (the most powerful of which allows for one-pedal driving).

The Burmester sound system is crisp and offers plenty of bass, while all touch points feel substantive, complemented with sleek carbon-fiber trim and supple leather. Unlike many a performance car, there’s nothing left wanting when it comes to the luxury showcased in the C63’s cabin, and that also elevates this vehicle’s already rarified stature.